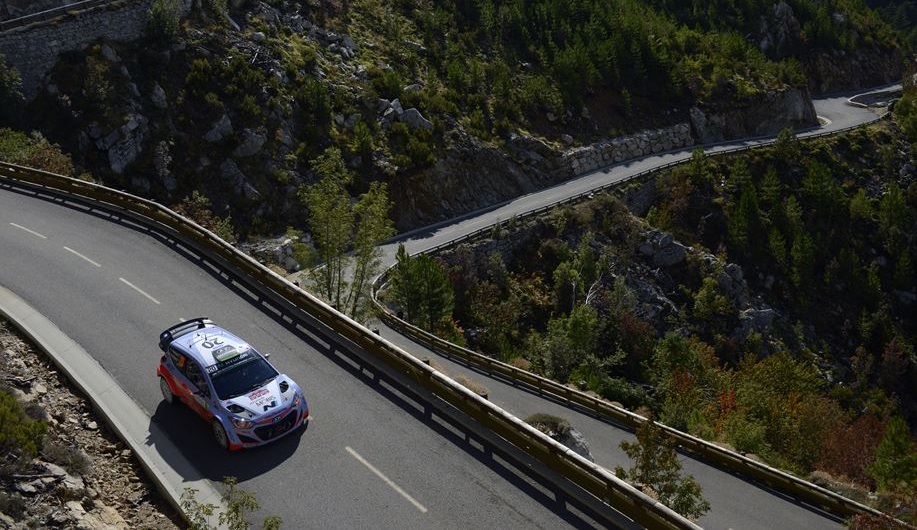 October 4, 2015  We have finished our first Tour de Corse with two drivers inside the top-seven overall after a strong final day.

Thierry finished safely after a challenging start to his rally and Kevin, who was chasing a top-five finish, retired after leaving the road in SS8.

Friday and Saturday both had one stage cancelled due to heavy rain, so today’s three stages made it the busiest of the rally. The damp and slippery conditions meant tyre choice was an important factor throughout the weekend.

It was Hayden’s first time rallying in Corsica and is his fifth top-five finish of the season. It is the best result the Kiwi has had on a tarmac rally and includes a third fastest time on SS 8 this morning.

“We made a good improvement in our tarmac driving technique this weekend,” said the Kiwi. “We still have things to improve but considering the conditions I’m happy with what we’ve achieved. We lost a lot of time on the damp first stage on Friday and were 15th overall, so I never expected to finish in the top five. This morning’s opening stages featured the same changeable conditions we’ve seen all weekend, so I had to drive accordingly. The long stage was tricky with three or four changes of rhythm but it’s been a valuable learning experience. The times were good and we were able to move into fifth, which is a satisfying result. It certainly gives us something solid on which to build for Spain.”

Dani was competitive all weekend, including a great win today on SS8. He lost time on Friday afternoon due to a broken rim but has come back strong since then.

“I have mixed feelings to be honest,” admitted the Spaniard. “We broke the rim on the first day, which lost us two minutes. Without that, we could really have pushed for a great result. When you look at the pace we set over the weekend  particularly this morning with the stage win  we could have fought for the podium. Even so, we can take positives from our performance. I was very happy with the car and the team did a great job here. It’s been a tough rally but with some beautiful stages. I’m now looking forward to my home rally in Spain.”

Thierry finished safely after a testing Friday, when an early retirement ended his chance for top positions. He re-joined on Saturday under Rally 2 and has driven well since then.

“I’ve been quite pleased with the way which we’ve finished this rally,” said the Belgian, “even if the result is not what we wanted. I had a better feeling today and enjoyed the three stages. The conditions all weekend have been demanding but the team worked well to react to the changing situations. Obviously, my rally was affected by the retirement on Friday morning, so there wasn’t much we could do to fight for manufacturer points, which was a shame. We have learned a lot and will fight back in Spain.”

It was a sad end to Kevin’s Tour de Corse, who retired after going off the road in SS8. He performed strongly before then, ending the Friday in second place overall and sitting in fifth overall before the incident.

“It was really disappointing to finish with a retirement,” said the young Dutchman. “I wanted to finish as high up the classification as possible, knowing that we were in a strong fight for the top-five. In SS8, my notes were simply too fast for one of the corners and I went off the road at the exit. I slid off-track a couple of metres down. Although the car was fine with no obvious damage – it was on its wheels leaning against a bush – we couldn’t make it back to the road. It is really unfortunate but on the positive side, we have shown good pace this weekend and had a strong run, so we have to capitalise on this in our next event, which will be Wales Rally GB.”

Our first time at Tour de Corse was a rewarding experience, and we continue our fight for second place in the Manufacturers’ Championship. Just one point separates us, and with two rallies remaining we will enjoy the battle to the end of the season.

“There are plenty of positives to be found from our first Tour de Corse,” said Team Principal Michel Nandan. “This has been a tough rally for everyone with demanding conditions. After the disrupted opening two days, we had three stages today so there was still a lot to play for. Hayden and Dani both pushed hard today and were rewarded for their efforts, moving into fifth and seventh respectively. Thierry put the disappointment of Friday behind him to find improvements. Unfortunately, it wasn’t a good day for Kevin after he went off the road in SS8, ending his impressive performance. He has made a lot of people take notice of him this weekend, and I’m sure that will really help for his next rally in Wales GB next month. We can leave Corsica satisfied but we’ve relinquished second place in the Championship by one point, so the battle will be back on in Spain.”