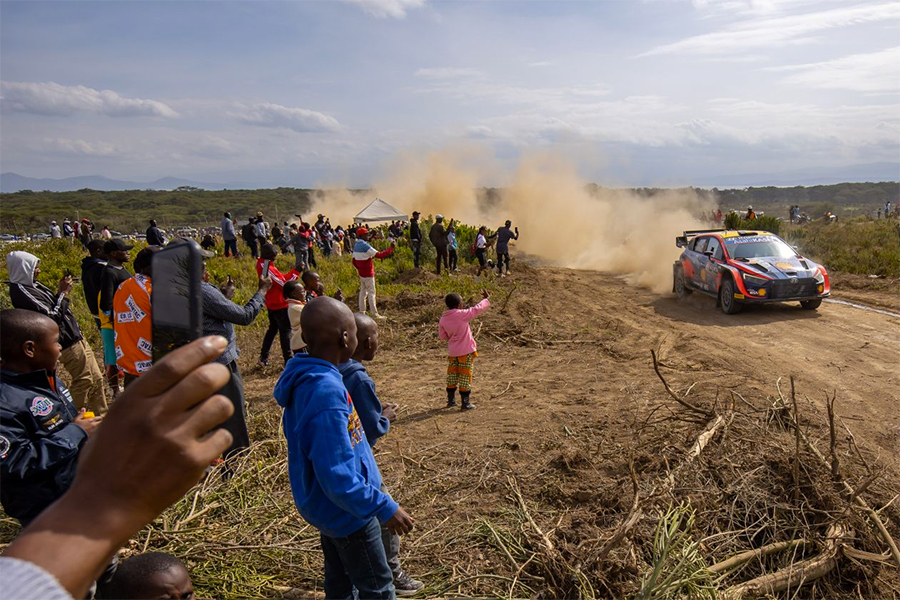 Despite challenging for podium positions in Safari Rally Kenya, round six of the 2022 WRC season, we were only able to come away with a fifth-place finish for Thierry and Martijn. All three of our crews experienced problems in extremely demanding conditions, typical of the legendary but punishing Safari event, but also showed their pace at times.

“We have achieved the maximum we could,” said Thierry. “Our focus was on getting something from the Power Stage, which we managed at least. I am really disappointed, not just for us but also for the mechanics, who have been working so hard.”

Anticipation was high for our second trip to the Safari, especially following our victory in Sardinia. A super special on Thursday set the tone but Friday’s six stages would be the first real test. Kedong, the longest stage of the event, posed the fiercest competition with its treacherous rocks, notorious fesh-fesh and hanging dust.

“It’s been a challenging survival day, and we’ve been fighting more with the rally itself than with our competitors,” said Ott in fourth place at the end of Friday. Thierry/Martijn lost time after their engine air filter got blocked with sand and dust, dropping to ninth. They fought back to fifth with Oliver/Elliott two place further back.

Our Belgians started Saturday strongly with two fastest times, including the Sleeping Warrior stage. In that same stage, Ott and Martin suffered transmission issues with a broken prop shaft that ended their podium pursuit.

With treacherous wet and muddy conditions in the afternoon loop, there was opportunity and danger for our remaining crews. Thierry/Martijn stormed into the podium positions with a strong run through Elmenteita but were then struck by issues on the repeat of Sleeping Warrior. Restarting their car after their engine cut mid-stage, poor visibility caused them to hit a tree. They held onto fifth.

Pointing to the positives

Starting Sunday’s six stages, the aim was to get the cars home and to pick up some points. There’s nothing guaranteed on the Safari. In the first run of Hell’s Gate, the Power Stage rehearsal, Ott/Martin led a 1-2 for our team, but the crew would suffer a further blow after the subsequent Oserian test after power steering issues ended their rally for good.

“This Safari Rally itself has been quite fun this year with some incredibly demanding conditions,” said Ott. “We can’t take any points from here, but it is what it is; we must learn from this and move forward.”

Oliver/Elliott, meanwhile, were slowed in the fesh-fesh and had to nurse their car home to tenth place. “My thanks to all the mechanics, without whom we would not have been able to reach the end of this challenging event,” said Oliver. “We know as a team we have a lot of work to do, but we’ll be flat out from here.”

Our Deputy Team Director Julien summarised: “It goes without saying that we are very disappointed by the rally overall, and we are all a bit down by this result. This is motorsport: sometimes you win, sometimes you lose. We have identified a lot of issues this weekend, and we are already working on the solutions.”

The next round of the season, Rally Estonia, takes place from July 14-17.

2022 FIA World Rally Championship for Manufacturers’ Standings
After round 6

2022 FIA World Rally Championship for Drivers’ Standings
After round 6