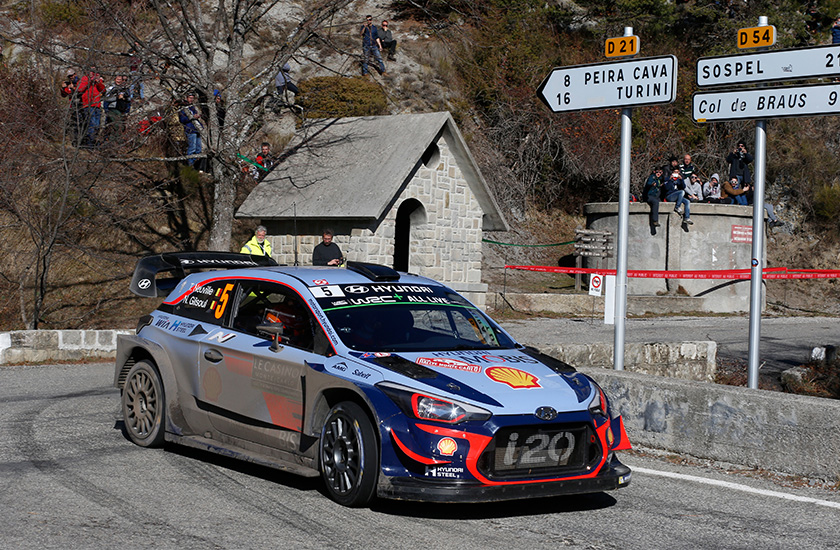 At the end of a gruelling Monte-Carlo rally, we were finally able to enjoy some competitive and relatively trouble-free stages. We added two more stage wins, bringing our weekend total to six, and our remaining crews picked up important Power Stage points.

Few people would have believed Thierry on Friday when he suggested that a top-five finish might be possible. Our Belgian crew had lost four minutes of time on Thursday evening to languish down the order in 17th place. A determined attitude and some feisty performances on Sunday morning saw them achieve their target against all odds.

“The places we have made up today – right to the end of the Power Stage – show how important it is to push to the finish,” he said. “Without the puncture and tricky snow conditions yesterday, a podium would still have been possible. That’s Monte-Carlo!”

In total, Thierry and Nicolas totalled five stage wins, with Andreas and Anders making it six in total for our team.

The highlight of Sunday morning was the iconic run up to Col de Turini, with its icy summit offering an exciting spectacle for fans. However, our Norwegians were concentrated on glory in the final test – the Power Stage. Starting first on the road, they ultimately had to settle for third – but were happy with their day.

“With no tyre zone or service, we adopted a compromised strategy taking five soft tyres,” commented Andreas. “I was happy with my run. It’s my best drive feeling-wise so far with the car on dry tarmac, which is encouraging.”

Down but not out

Our Team Principal Michel concluded: “Monte has never been a particularly kind rally to us, and again we leave here with little to show for our efforts. We had some improved stage results today, and a strong Power Stage run from Thierry and Andreas, but we can only really look back on this weekend as a rally of disappointment. We have to put this one behind us and start our 2018 season properly in Sweden.”

The second round of the 2018 WRC takes place in Sweden from 15-18 February, where we will field a three-car line-up with Hayden joining Thierry and Andreas.

2018 FIA World Rally Championship for Drivers’ Standings
After round 1

2018 FIA World Rally Championship for Manufacturers’ Standings
After round 1