Two of our drivers in the top six following a testing day of mixed fortunes. 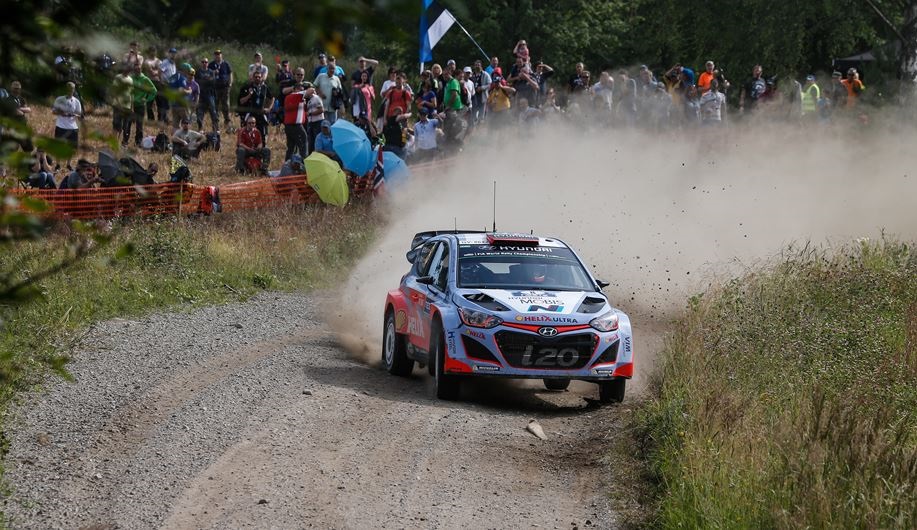 Two of our drivers in the top six following a testing day of mixed fortunes.

July 31, 2015  The opening day of the fast and demanding Rally Finland, round eight of the 2015 WRC calendar, proved to be a challenging one for our team.

Thierry Neuville, Dani Sordo and Hayden Paddon made a good start to the day with all three drivers in the top eight by the end of the morning. But the high speeds and famous jumps of the Finnish stages started to take their toll on drivers and cars as the day progressed. Caution was needed with no lunchtime service and only a tyre-fitting zone after the SS5 Himos stage, and the afternoon loop saw a change in fortune for some.

Thierry had a rocky start to the rally when he crashed his car in Thursday’s shakedown but used today’s stages to regain confidence. He picked up the pace to finish the day in fifth overall.

“It has been a hard day but I think we have made some important improvements stage by stage,” said the Belgian. “Our weekend got off to a bad start when we had a crash in Shakedown on Thursday. The team did a great job to fix the car but we had some work to do in the opening stages this morning. The pace notes were not really quick enough and we had to rebuild our confidence in the car. We found conditions to be better after lunch and we could go faster. We tried to push but we had a big moment in SS9 (Himos 2) and nearly rolled so we were lucky to get to the end of the day. Our target is to get more confidence tomorrow and improve the performance level.”

This was Dani’s first Rally Finland for our team and he made the most of today’s stages by getting used to the tough terrain again. An exhaust problem in the afternoon was the only issue on an otherwise positive day.

“I didn’t do this rally last year,” commented the Spaniard, “so I have had to use today’s stages to reacclimatise to the fast Finnish stages and to get a feeling from my Hyundai i20 WRC. We did as much as we could but it was a difficult start. We felt the rear of the car move quite a lot at the beginning of Ouninpohja but once we were in the narrow sections it was a lot faster and more fun. We made some changes to the car and found some gains for the afternoon loop. In the repeat Päïjälä stage, we felt the car become very hot and it turned out we had an issue with the exhaust. We tried to fix it and could continue to set some decent times so to finish the day in sixth place is not so bad. There’s room for improvement tomorrow.”

After successful events recently with third and fourth placed finishes in Sardinia and Poland, Hayden was strong in today’s morning stages until a crash in the SS6 Pihlakakoski stage halted his progress. He and co-driver John Kennard were unharmed but the car was too damaged to repair and unfortunately they were forced to retire from the rally.

“Obviously, I’m really disappointed that we have had to retire from the rally,” said the Kiwi. “We had a decent morning and although it was difficult to find grip and confidence, we were continually making changes that we hoped would have benefited us in the afternoon loop. Unfortunately, just 1km before the end of the first afternoon stage, we lost the car. Thankfully, John and I were OK but the car was too badly damaged and the team has been unable to fix it. We’ve therefore been forced to retire from the event. We’ve built up a lot of momentum in these recent rallies so I’m determined to put this behind us quickly and move onto the next one. In the meantime, we’ll support the team for the rest of this weekend.”

Rally Finland is one of the most demanding rallies of the season, requiring drivers to attack with full confidence in their cars. The results have not been what our team hoped for but we have seen that the Hyundai i20 WRC is able to fight for top three stage times.

“Finland hasn’t reached legendary rally status because it is easy,” commented Team Principal Michel Nandan. “We’ve seen today that it remains one of the WRC’s biggest challenges. On the plus side, we have Thierry and Dani both holding strong top six positions at the end of the first day with plenty of room for improvement tomorrow. Regrettably, on the other side, Hayden has been forced out of the rally after crashing on the first stage of the afternoon loop. The damage to his car was unfortunately too much for us to repair. We know there is more to come and we will sit down this evening to discuss what we can do to improve the cars for tomorrow, and also to make sure the drivers continue to build their own confidence levels because that is absolutely crucial on these Finnish stages.”

Saturday will see the drivers take on a repeat of four stages totalling over 130km. Stages such as Mökkiperä and Jukojärvi will present big challenges to our team and our two remaining crews will seek to finish the day strongly.