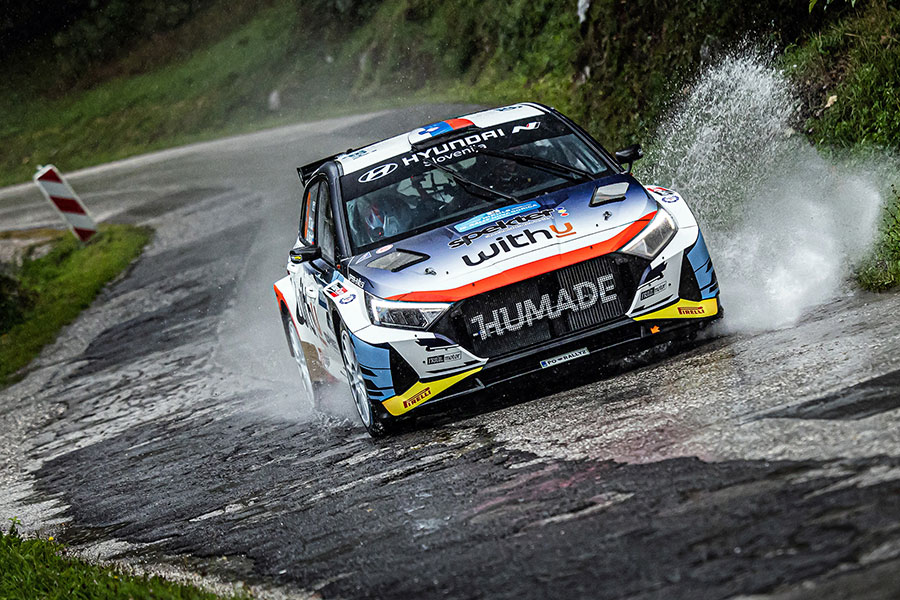 Hyundai Slovenia-supported driver Rok Turk completed a near-perfect season in the Slovenian Rally Championship with a sixth national title – his fourth as one of our customers and a first with our i20 N Rally2.

“For several years in our i20 R5, Rok has been the benchmark in the series,” said our Deputy Team Director Julien, “but in his first year with our i20 N Rally2 he has taken another step forward.”

Pushing to the end
Wins in each of the first six events of the seven-date season allowed him to clinch the title with a round to spare. However, even with the crown confirmed, his pace was unrelenting as he pushed for victory at Rally Idrija to close the campaign.

Two fastest stage times to start the event set the tone for another exemplary performance. However, after losing time on the final stage of the opening loop, Rok and co-driver Viljem Ošlaj found themselves in the unfamiliar position of being at the edge of the top ten. Fortunately, the pair recovered with stage wins on five of the remaining six tests to reclaim fourth, missing the overall podium places by only half a second.

Cut above the rest
Only twice in the preceding six rounds had Rok and regular co-driver Blanka Kacin failed to lead the national championship runners in the stage times. On both occasions they had lost time to punctures. In total, through the entire season, the Slovenian scored a remarkable 58 fastest times against his domestic competitors while achieving 41 overall stage wins.

“‘Dominant’ is an over-used phrase in motorsport, but it truly applies to the form shown by Rok in the Slovenian rally championship this year,” added Julien.

The success of our customers in the series was added to by i20 R5 driver Marko Grossi. Five times he and co-driver Tara Berlot completed Hyundai 1-2 finishes behind Rok and Blanka. They too continued their form in the final round, claiming victory to confirm their place as runners-up in the final championship standings.