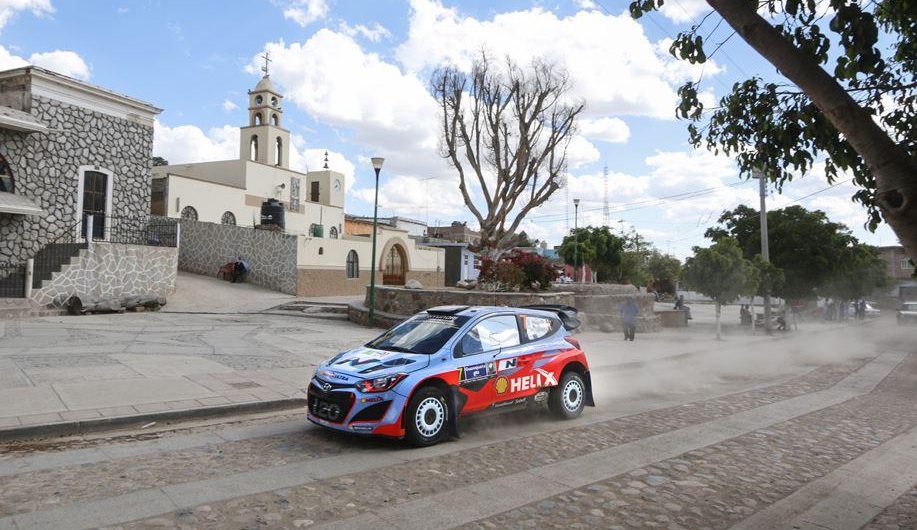 Despite the encouraging performance of the Hyundai i20 WRC cars, the team remains focussed on securing a two-car finish in this demanding rally, its third WRC event, which will enable it to add invaluable experience in its ongoing learning year.

The opening two stages today  SS12 Ibarilla 1 (30.33km) and SS13 Otates (53.69km)  gave the Hyundai Shell World Rally Team its sternest test yet, representing just under half of the day’s competitive kilometres. 170km of stages run throughout the day allowed the team to improve from yesterday as Neuville moved from eighth on Friday to third at the end of Saturday with a podium well in his sights and with Atkinson sitting in seventh position.

Neuville said: “The first stage this morning was not easy because I lost the brakes towards the end of the stage and had to slow down but since then we have had a good run. The stages were really slippery this morning but I enjoyed driving and we took it nice and steady. We are now in a very interesting position. I’ve been carrying two spares so the car has been a bit heavier than normal and I lost a bit of time in the fast sections but I made up time on the twisty bits. In the afternoon, I was sliding a lot in SS14 (Ibarilla 2) because of the weight on the rear but SS15 (Otatitos 43.06km) was good and I had a great run. We are in a good position heading into tomorrow but our focus is still on finishing the rally rather than the overall result.”

Atkinson said: “It was not easy to be first on the road this morning and the stages were very loose, it was like driving on ice. It was easy to make a mistake so we took it easy and stayed out of trouble. We played with the balance of the car over lunch to improve the handling in the conditions which helped in SS14 but further changes before SS15 weren’t really in the right direction. Even so, we had a better day and learned a lot. We moved up the rankings but tomorrow our objective is to reach the end of the rally and to bring our learning from this event to a positive conclusion.”

Despite the allure of a podium result, the Hyundai Shell World Rally Team is fully focussed on its main objective on securing a two-car finish, which will allow the team to add more experience and data in its first year of competition. Nonetheless, the ability to fight in the top fiv e in most of today’s tricky stages gives the team confidence in its abilities and in the performance of the Hyundai i20 WRC cars.

Team Principal Michel Nandan said: “It has been another day of intensive learning for the Hyundai Shell World Rally Team as we continue to gather more experience from the unique conditions of Rally Mexico. Both crews were effectively sweeping the roads in this morning’s first stage as they started first and fourth, encountering tough road conditions. It was a relatively trouble-free morning and very useful for data acquisition. We made some changes to the cars over the lunchtime service and made some progress this afternoon. Thierry is in a podium position at the end of today which is obviously great but it is not our target. Chris, too, has made significant improvements compared to our difficult Friday. We have a long final day ahead of us tomorrow so our objective is to keep both cars on the road and to conclude our learning targets from this rally.”