Two New Generation i20 WRCs inside the top-five 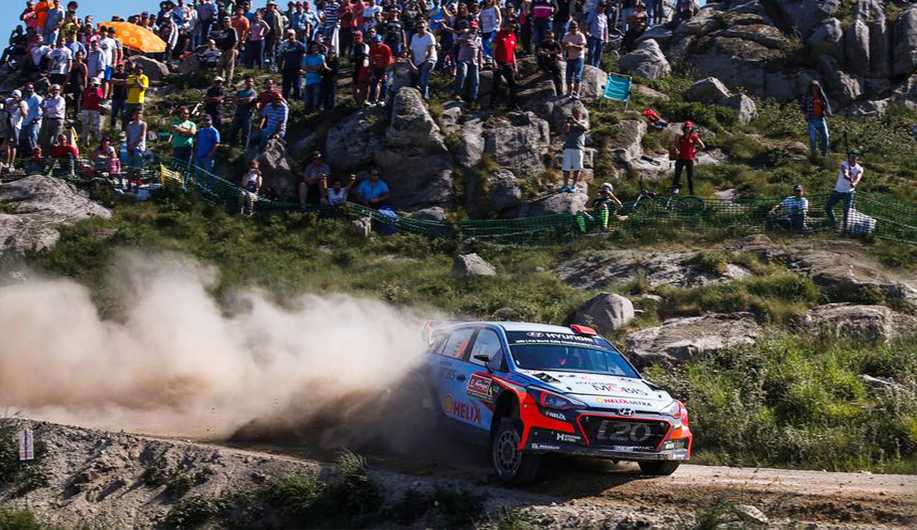 May 20, 2016  Following our victory in Argentina last month, it was back to business for our team today as we tackled the first day of Rally Portugal, round five of the 2016 WRC season.

Fielding four WRC cars for the first time this season, we knew it would be a challenging event. But nobody could predict just what a day of highs and lows we would encounter!

On the positive side, Dani holds third place – a provisional podium position – after a strong day for our Spanish crew. Battling for the top-two throughout Friday’s eight stages, it was only a puncture in SS7 (Viana do Castelo) that halted progress.

“It’s been a pretty good day in general,” said Dani. “I am pleased we have been able to show our pace in the New Generation i20 WRC. We had a competitive morning and the car felt great. Unfortunately, we picked up a front-left puncture during SS7, which lost us a lot of time. That was a bit disappointing. It’s great to drive in front of so many fans here. When we have a good car it gives us the motivation and confidence to push.”

Our Belgian crew Thierry and Nicolas finished the day with two impressive stage wins on the streets of Porto. They put in a confident display in the #20 New Generation i20 WRC in front of thousands of fans to top the timesheets and secure a top-five overall. It was a positive end to an encouraging day.

“It was nice to end the day with two stage wins after a cautious start,” said Thierry. “I wanted to take it easy on the opening stage. I was surprised to lose so much time. We picked up the pace after that and built some confidence. We had a front-left puncture in SS7, which was a shame. That lost us some time but we made it through and can rebuild tomorrow from fifth. Who knows what could happen!”

It was Kevin’s first WRC appearance for our team since Wales Rally GB last November. Unfortunately, it was a shorter day than he and co-driver Seb wanted. Driving a fourth car – a 2015-specification i20 WRC – Kevin got off to a steady start. A misjudgement in SS3 (Caminha) resulted in a broken steering arm for the #10 car, and an early retirement for the crew. They’ll be back under the Rally 2 regulations on Saturday.

Kevin said: “It’s a disappointing way to end our first day of WRC since last November. The purpose of these next two rallies is to build my confidence on gravel. We wanted to take it easy but in SS3, in a left-hand corner, we thought we’d slide but there was more grip than expected. We touched a wall, which broke the steering arm. I can’t wait to get back out there tomorrow.”

Our Argentina winners Hayden and John had a tough afternoon in the #3 New Generation i20 WRC. The Kiwi crew went off in the afternoon’s opening stage, SS5, rolling the car into the trees. A fire broke out from the exhaust heat, which set trees alight and ultimately destroyed the car. The crew were thankfully unharmed but they won’t continue in the rally.

“We started the morning quite well, just a few technical issues,” explained Hayden. “We didn’t lose much time and were keeping in touch. We wanted to close the gap in the afternoon but it wasn’t to be. We were caught out by a big hole in the road that sent the car into a roll off the road. The consequences for a small mistake are very harsh and I am sorry for the team.”

Our Team Principal Michel Nandan knows well that rallying on the world stage is full of highs and lows. He adds:“It has been a day of ups and downs. In our first rally this year with four cars, we weren’t expecting a straightforward rally. There have been some disappointments for Hayden and Kevin today, and encouraging performances from Dani and Thierry. I’m sure we’re in for another thrilling day of WRC action on Saturday!”