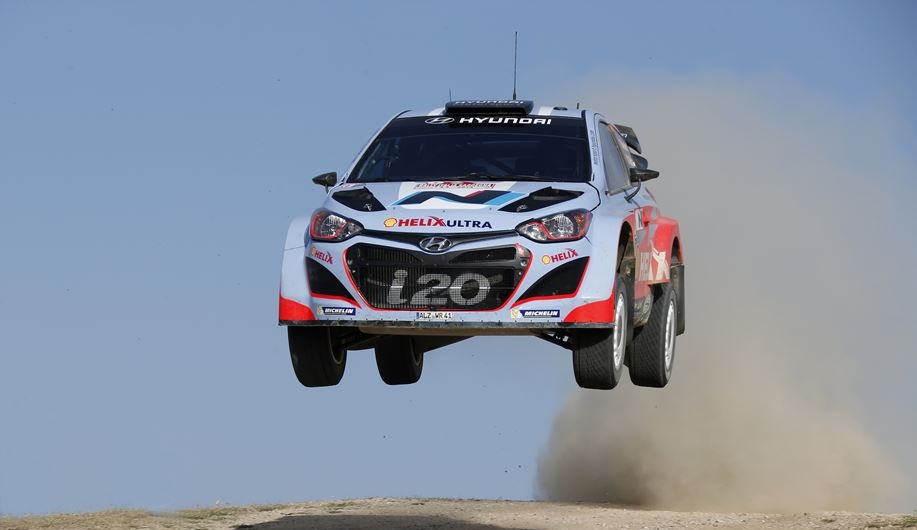 Hyundai Shell World Rally Team has made the most of a difficult set of circumstances to use Friday’s four tough stages to make key improvements to the Hyundai i20 WRC car.

June 7, 2014  The Hyundai Shell World Rally Team has put its full efforts into making the most of this weekend’s Rally Italia Sardegna following a disappointing end to the opening day of action on Friday.

The #8 Hyundai i20 WRC of Juho Hänninen and Tomi Tuominen was forced to retire from the rally after its crash yesterday but the team continued to run with two cars in today’s four stages with Thierry Neuville (co-driver Nicolas Gilsoul) and Hayden Paddon (co-driver John Kennard).

The Belgian duo of Neuville and Gilsoul were given a disadvantageous starting position for today’s stages after they encountered a technical issue on SS5 yesterday which dropped them down the order. Neuville adopted the correct approach in the morning loop, navigating SS10 (Monte Olia 1, 19.27km) and SS11 (Monte Lerno 1, 59.13km) with the right balance of attack and caution.

Together with the team, he made some key set-up changes during lunchtime service which allowed him more confidence in the car for the afternoon loop and noticeable improvements in the performance. Third place in the final stage (Monte Lerno 2) perfectly highlighted the positive steps made during the day.

Neuville commented: “Being second on the road today meant that the stages had very little grip and were really tricky to drive. However, I felt that we had a good morning loop and I drove well. We used today to make some setting changes to the car and to continue our learning with the Hyundai i20 WRC. The team did a great job during lunchtime service and I felt more comfortable in the car during the afternoon loop, which showed from the stage times. I was able to push a lot more and it shows that we are definitely making progress with the car. I hope we can continue in this way tomorrow.”

Learning was the order of the day for the Hyundai Shell World Rally Team’s newest crew as Paddon and his co-driver John Kennard looked to settle into a rhythm during this tough Rally Italia Sardegna. Starting fifth on the road was always going to be an added challenge for the Kiwi crew but they adopted a sensible strategy to increase their confidence and understanding of this rally’s complexities. Unfortunately, just 10km into the long, final stage, Paddon reported a misfiring engine after going through the water splash. After speaking to the team, he tried to continue but the team requested him to stop mid-stage to avoid damaging the unit further. The team is now confident of getting him back into the event under Rally 2 regulations tomorrow.

Paddon said: “This rally was always about learning and it has been a valuable day for us in that regard. We had an ok morning but it was a bit slippery as a result of our starting position. We just concentrated on making improvements to the car and improving my own driving on these tough stages today. Compared to yesterday, we made some changes to improve turn-in but our pace notes didn’t really give us the confidence we needed. We made a few changes at lunchtime service and it was a definite improvement but unfortunately we couldn’t complete the final stage due to an engine misfire after the water splash which the team has to examine. Hopefully, we can get back out there tomorrow and conclude our learning from this event.”

In order to maximise the opportunity to gather more information and experience from the Hyundai i20 WRCs through some of the championship’s toughest stages  including the almost 60km Monte Lerno stage  the team worked hard to find improvements on the car set-up today. It was a strategy that reaped rewards as both drivers demonstrated improved pace during the day.

Team Principal Michel Nandan said: “Today has been largely a positive day for us. I always maintain that we were competing this year to learn and to improve; today shows just how important that approach is. It is obviously a shame that Hayden had to stop in the final stage because, like Thierry, we had made some good improvements to the Hyundai i20 WRC cars during the day. After going through the water splash, he reported a misfire and we felt it was safer to stop the car in the stage rather than risk the engine further so we can restart under Rally 2 tomorrow. We will be investigating everything closely this evening. Both cars were hindered by their starting positions and had to cope with some tough conditions but Thierry and Hayden approached the day intelligently. Thierry had a reasonable morning loop and the changes we made over lunch gave him more confidence, which resulted in a good top three result at Monte Lerno. We will work hard tonight to see if we can begin tomorrow with both cars and continue development of the car for this rally and ahead of Rally Poland.”