Victory and podium in Spain

Thierry/Nicolas take our fourth win of 2019! 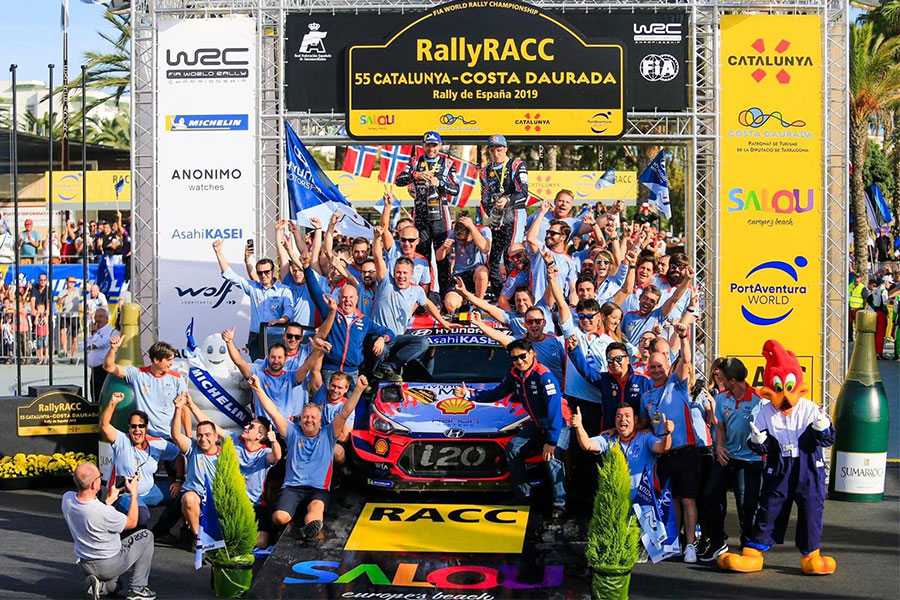 Thierry/Nicolas take our fourth win of 2019!

The mixed surfaces of Rally de España delivered an important result for our team in the WRC manufacturers’ championship, as we increased our lead to 18 points with a fantastic 1-3-4 result.

Thierry and Nicolas registered their third win of the season, and our fourth in total for the year, with an impressive performance on the gravel/tarmac rally. The result represents our first ever WRC win in Spain and validates the improvements made to our i20 Coupe WRC throughout the season.

“What a weekend!” said Thierry. “We have been consistently quick on all three days, and we did absolutely everything we could. The car has proven itself to be quick on all terrains in recent rallies and can head to the season finale in a positive frame of mind.”

All crews in the mix

There were strong performances from our three crews across the entire weekend with a total of 11 wins from the 17 stages. A primarily gravel focused itinerary on Friday saw Sébastien and Daniel take an early lead with three fastest times. Dani and Carlos were also on fine form as they mounted a charge for the podium.

Our mechanics worked hard during Friday evening’s 75-minute service to change the cars to tarmac specification, ready to tackle the rest of the weekend. Thierry and Nicolas started Saturday with two stage wins to move into the lead, steadily increasing their advantage over two loops and a fan friendly stage at Salou.

Four stages remained on Sunday morning with Dani/Carlos being pursued for second place by Ott Tänak. Our Spaniards were pipped on the Power Stage, and ultimately finished in third place, 0.4-seconds behind. It was the crew’s second podium of the season and Dani’s first in Spain since 2016.

“I am happy to finish on the podium in my home rally but of course we would have preferred to keep hold of second place,” he said. “Thank you to the team for giving us a car that has worked so well all weekend. These sorts of results don’t come just from the crews, it is a full team effort.”

Down to the wire

Sébastien and Daniel had to settle for fourth place but reflected on a positive weekend for the team as a whole. “It has been a positive rally for the entire team,” said Sébastien. “The i20 Coupe WRC is a fantastic car on all terrains. The team leaves Spain with a lot of valuable points for the manufacturers’ championship, which sets things up as nicely as possible for the final round.”

Our Team Director Andrea reviewed the weekend: “A 1-2 would have been better but a 1-3 is not bad. Thank you to Thierry and Nicolas for bringing the team to victory. Without them, we couldn’t have achieved the result we needed. Our car has shown its strength on gravel and tarmac this weekend, and we are now ready for the final fight. We’ve taken an important result today, but the final calculations will only be done after the Power Stage in Australia.”

Rally Australia will bring the 2019 FIA World Rally Championship (WRC) to its conclusion from November 14-17, where the manufacturers’ title will be decided.

2019 FIA World Rally Championship for Manufacturers’ Standings
After round 13

2019 FIA World Rally Championship for Drivers’ Standings
After round 13