Victory fight opens up in Australia 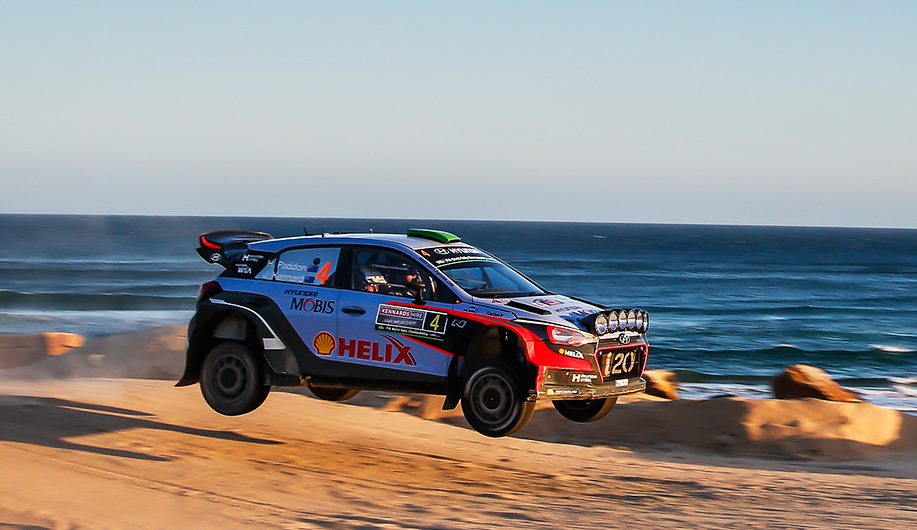 The scene is set for a spectacular end to the 2016 WRC season. Just twelve seconds separate the top three crews at the end of the penultimate day in Australia  and our team is firmly in the fight!

We have all three of our New Generation i20 WRC crews inside the top-five heading into the final day of action. Our Kiwi crew of Hayden and John has moved up into the podium positions after an impressive performance on stages they describe as “amazing”.

Thierry and Nicolas hold fourth place with Dani and Marc fighting back up to fifth after their 20-second time penalty on Friday. “Things are shaping up to offer a very exciting end to the season,” said our Team Principal Michel.

Push to the Finish

Saturday’s itinerary has included two runs through the mighty 50.80km Nambucca stage, one of the longest tests of the season. It’s the sort of challenge that our Kiwis enjoy, as they proved by winning the opening stage of the day. “The stage win through Nambucca definitely set a positive tone,” said Hayden.

It’s not all been straightforward, though, with tyre management playing a key role today. The typical dusty conditions out on the Australian stages have also required crews to remain focused.

“There was a lot of dust coming into the car on those opening stages,” revealed Hayden. “It was a bit of a distraction but you have to expect that in Australia. We’ve concentrated on keeping up the pressure. We missed a bit of speed in the afternoon loop but it’s been a good improvement on last year.”

Too close to call

It’s not only the rally victory that is close this weekend; the battle for second place in the Drivers’ Championship is looking equally tense. Based on the current standings, there would be just one point separating Thierry and rally leader Andreas Mikkelsen heading into the final day. The Power Stage, with three additional points up for grabs, could be crucial.

“Considering the conditions, it’s been a good day,” said Thierry. “We made a wrong tyre choice on the morning loop. In hindsight we should have taken more of a risk. But that’s easier said than done when we’re trying to secure second in the Championship.”

Setting the fastest time in the afternoon’s SS16, a repeat of the 14.84km Valla16 stage, Thierry showed that he’s ready to battle right to the end. “We’re still in the podium fight and we definitely won’t stop until the rally is over!” he said.

Another crew not giving up without a fight is Dani and Marc. They have worked hard to regain positions after a disappointing Friday. They have moved up into fifth position overall.

“A much more positive day for us,” commented Dani. “I was pleased to set some good times today. The car has been nice to drive. I’m confident, so let’s see what we can do tomorrow.”

A kind of magic

Sunday, the last day of the 2016 season, will be a busy one. In addition to the 6.2km Settles Reverse and 6.44km Wedding Bells stages, crews will also have to negotiate the 31.90km Bucca test. The two shorter runs will be repeated in the afternoon with Wedding Bells acting as the season-ending  and potentially decisive – Power Stage.

It promises to be a spellbinding end to the season. “Tomorrow we will not hold back,” says a determined Hayden. “Maybe a bit of that final stage Argentina magic is what is needed!”

“Of course we want to take our first Australian podium,” adds Michel, “but we definitely want to do all we can to push for victory!”