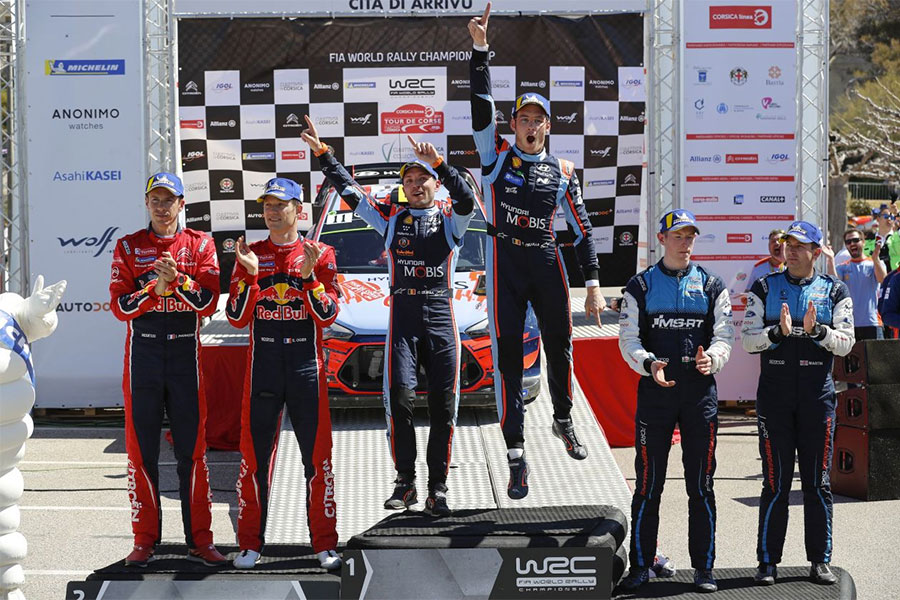 It’s not over until it’s over – and that was certainly the case on an unpredictable final day at Tour de Corse! Thierry and Nicolas claimed our first WRC victory of the 2019 season in unexpected style.

Our Belgian crew had led the rally overnight following a strong Saturday performance. However, they were initially pushed back to second after Sunday’s opening stage, Eaux de Zilia (31.85km), as Elfyn Evans built up an 11-second advantage.

With all still to play for heading into the 19.34km Power Stage at Calvi, they were on course to secure second until issues for Evans handed us the victory.

“What an incredible rally and a fantastic result!” said Thierry “I would like to extend my thoughts to Elfyn and Scott; I am really disappointed for them. It had been a great battle and they were undoubtedly the quicker crew this weekend.”

The result marks our 11th WRC victory and our second in Tour de Corse. It has helped move us back into the lead of the manufacturers’ championship while Thierry sits proudly atop the drivers’ standings.

“The points we’ve scored this weekend are hugely important,” added Thierry. “It is testament to the hard work of everyone at Hyundai Motorsport. We may not have been the fastest in outright pace, but there has been a significant improvement in our tarmac performance and this victory is perfect thanks for all their efforts.”

Our Team Director Andrea was realistic in his appraisal of the weekend: “We arrived at the end of Tour de Corse in first position, but we cannot say that we have won the rally. Taking first place is of course a very positive thing for our team. We have been pushing hard and this will definitely act as a morale boost, but we have to be clear with ourselves where we are performance-wise, and where we need to be.”

Dani and Carlos claimed a stage win on Saturday to put themselves into podium contention. Unfortunately, they had to settle for fourth place.

“We came to Corsica with a target of taking a good amount of championship points for the team, and we have achieved that,” said Dani. “We have shown some positive pace, but we’ve also struggled at times. We didn’t have the consistency we needed to fight for the podium but finishing fourth is not so bad.”

Sébastien and Daniel were out of the fight from the start after running into a ditch on the opening stage of the rally. They brought their i20 Coupe WRC home in eighth place.

“A great result for the team,” commented Sébastien. “Unfortunately, our own rally was effectively over after our issues in the opening stage on Friday. Despite our challenges, it has still been an enjoyable rally. Hopefully I can do better next time.”

WRC moves back overseas for the next round of the championship, as Rally Argentina kicks off a South American double-header from April 25-28.

2019 FIA World Rally Championship for Drivers’ Standings
After round 4

2019 FIA World Rally Championship for Manufacturers’ Standings
After round 4