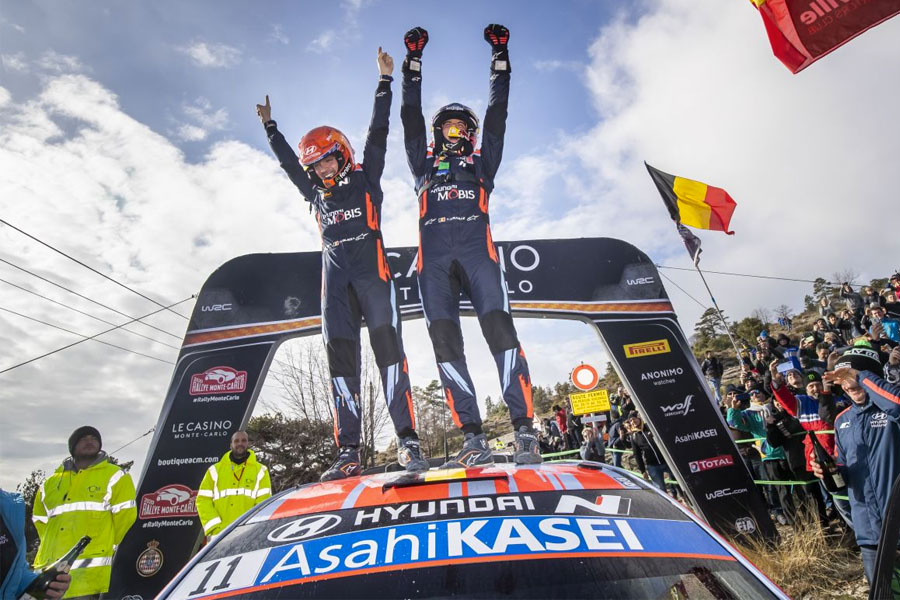 We have begun the defence of our WRC manufacturers’ championship in style with victory in Rallye Monte-Carlo.

Thierry and Nicolas won with a dominant performance on the final morning, securing a clean sweep of stage wins. They added five extra points to the drivers’ totals by winning an exciting Power Stage by just 0.016s. Our first Monte-Carlo triumph marks our 15th WRC win in total.

“It is so meaningful for me personally to win Rallye Monte-Carlo,” said our Team Principal Andrea. “It was one of the events that first attracted me to this sport, so to see a Hyundai with Thierry and Nicolas on the top step of the podium is something special.”

For our Belgian crew, who took a total of nine stage wins out of a possible 16, the feeling was equally moving. “This is an amazing way to start the season,” said Thierry. “I am really pleased that we have finally taken victory in Monte-Carlo; it’s been something we’ve chased for a while. We’ve come close before but now we’ve done it.”

The #11 crew put in an exemplary performance all weekend to get the maximum from their i20 Coupe WRC in some typically challenging Monte conditions. Having cemented a 6.4-second gap to the leaders by the end of Saturday, they cut the deficit on Sunday’s opening stage (the first run up the legendary Col de Turini), before moving into the lead.

They then extended their own advantage to 12.6-seconds with a tense Power Stage win. “The perfect way to start a new season,” exclaimed Thierry.

Elsewhere, our two other crews had weekends to forget. Sébastien and Daniel finished a tough event in sixth place but scored ten important points for the manufacturers’ championship.

“This has certainly not been the rally we were hoping for,” said Sébastien. “It has been a difficult one and it seems the planets were not aligned for us. Huge congratulations to Thierry, Nicolas and the entire team for the victory.”

For our newest pair, Ott and Martin, their first rally in Hyundai Motorsport colours ended in dramatic style, as they crashed out on Friday morning’s opening loop. The Estonians emerged from the incident unscathed and are already looking forward to the next rally.

“Martin and I feel fine,” said Ott at the end of Friday. “In the early stages with the car we’ve been improving step-by-step. We really had some tricky conditions and it’s been challenging. I must say it was proper Monte-Carlo.”

We have taken an early lead in the manufacturers’ classification on 35 points, while Thierry starts the 2020 season atop the drivers’ table with the maximum 30 points on offer. Andrea was quick to praise the work of the whole team after an emotional result.

“I remember after we finished second last year, listing all the things on which we needed to work on and the areas in which we needed to improve,” he said. “My people have done a great job filling in those gaps and have shown this weekend what they are capable of. We are not perfect, and we have to strive for perfection, but for now we will celebrate this victory.”

2020 FIA World Rally Championship for Manufacturers’ Standings
After round 1

2020 FIA World Rally Championship for Drivers’ Standings
After round 1