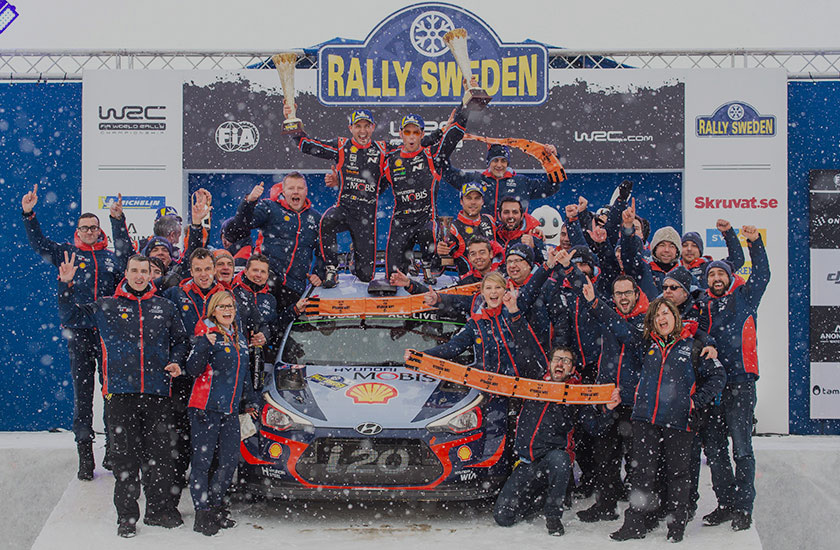 Twelve months since a cruel retirement from the rally lead, our Belgian crew Thierry and Nicolas have finally conquered Rally Sweden. A competitive weekend for the pair saw triumph by 19.8 seconds over Citroën’s Craig Breen with our Norwegians Andreas and Anders also on the podium!

It was a suspenseful Sunday on the snowy Swedish stages with plenty up for grabs. Thankfully Thierry and Nicolas mastered the conditions to secure our first victory of the 2018 season in style.

“An incredible result,” said a smiling Thierry on the podium. “I felt we deserved the win last year, but perhaps even more so this weekend. We have many people working tirelessly every day behind the scenes to give us a competitive car, one with which we can fight for victories. This win is for all of them; it’s been a fantastic weekend.”

The winner takes it all/strong>

Taking 25 points for the win and an additional two points in the Power Stage, Thierry is now leading the drivers’ championship after two rounds. As a team, we have also jumped up to the top of the manufacturers’ table in a closely fought contest with Toyota, Citroën and M-Sport.

Andreas and Anders finished third in the Torsby Power Stage to add three extra points to their own podium points. “It is a fantastic feeling to be standing on the podium for the first time with Hyundai Motorsport,” said Andreas. “It’s wonderful to see the team at the top of the championship, even at this early stage in the season.”

It was a less auspicious end to the rally for our Kiwi Hayden and his co-driver Seb. Trying to defend fourth place, the crew had a small excursion into a snow bank on the final stage, losing valuable time.

“An annoying end to what had been a generally positive weekend for us,” said Hayden. “It was just a small mistake. We have plenty of positives to take away and I am looking forward to continuing this trend in my next WRC event in Portugal.”

The name of the game

The result marks our first victory in Sweden and the eighth WRC win in our team’s history. After a disappointing start to the season in Monte-Carlo, we have bounced back well.

“This has been a fantastic rally for our team,” commented Michel. “We have performed strongly. I have said many times that the competition in WRC is the toughest and closest it has been for years, so we can’t take this result for granted.

Round three of the 2018 WRC season takes place in Mexico from 8-11 March. It will be the first gravel round of the championship where we have twice finished on the podium previously.

2018 FIA World Rally Championship for Drivers’ Standings
After round 2

2018 FIA World Rally Championship for Manufacturers’ Standings
After round 2