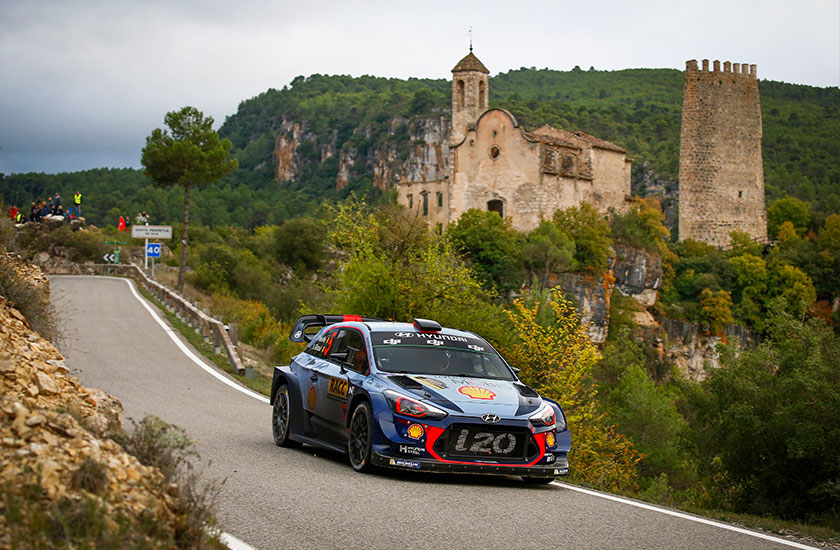 The fight for the 2018 WRC title is set to intensify as we move into the penultimate round of the season, the mixed surface challenge of Rally de España.

Heading to Spain, Thierry leads the drivers’ table by seven points with a maximum of sixty up for grabs in the final two rounds of the season.

“These rallies are massively important for us,” said Thierry. “We have lost some ground in the past couple of events, but we are still on top and we won’t give up without a fight.”

In the manufacturers’ championship, we lie in second place with a 20-point deficit, but our Team Principal Michel remains hopeful of a turnaround in fortunes.

“There is no room for error in Spain,” he said. “We still have a mathematical chance to achieve our goals by Australia. We will give it our maximum. We will also do everything we can to support Thierry in the drivers’ title  engineers, mechanics and crews alike.”

We welcome back our Spanish crew Dani and Carlos for their home event, and their first WRC outing since Rallye Deutschland back in August.

“Nothing can replace the feeling we get when competing on home soil and in front of such passionate supporters” said Dani. “The gravel to tarmac schedule is like no other rally we tackle, and requires a different approach.”

As a result of its combination of surfaces, Spain is often seen as two rallies in one. Starting with a short tarmac stage in Barcelona on Thursday evening, the event moves onto mainly gravel routes before fully tarmac tests wait on the final two days.

All eyes will be on our mechanics during Friday evening’s 75-minute service as they change set-up on all three of our i20 WRC cars. We are hopeful that our i20 Coupe WRC will be a strong match for all the Spanish stages, after important progress has been made throughout the season.

Our Norwegian crew Andreas and Anders have certainly noticed the improvements. “The steps we have made in the past few rallies have not really been reflected in our results,” said Andreas. “I feel we have made gains on tarmac. We now have to see if all our homework pays off.”

Michel concluded: “We have a good car, a strong team and competitive drivers; we need to put all the elements together and aim as high as we can.”