WRC title ‘made in Alzenau’ 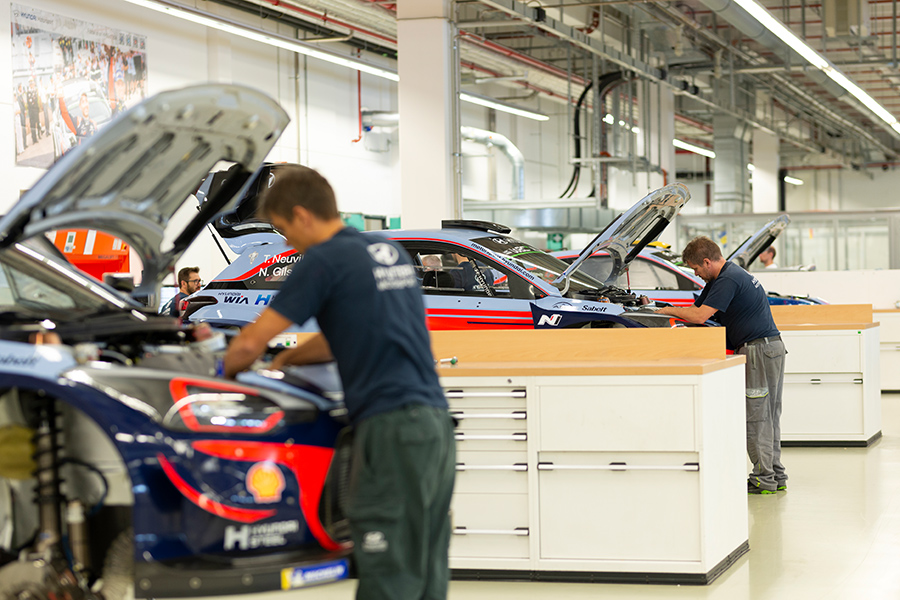 One week on from securing the 2019 WRC manufacturers’ title* in Australia, we have collectively celebrated our achievements back at our base in Alzenau, Germany.

The Hyundai name has been added to an impressive roster of winners in the WRC history books, as we have become the first-ever South Korean manufacturer to take the championship. However, the roots of our motorsport activities lie in the small German town of Alzenau.

“Alzenau is the birthplace of Hyundai Motorsport, so it is fitting that we have celebrated our WRC title success with as many of our colleagues as possible,” said our President Scott Noh. “The WRC result really is the culmination of years of hard work and dedication by a skilled workforce, and the ideal illustration of our ‘never give up’ mentality.”

Over six competitive years, dating back to an inaugural season of WRC in 2014, we gradually built up our title-winning credentials with teamwork at the very heart of the operation. We finished as runners-up in the title chase on three consecutive occasions (2016-2018), but this year saw our most accomplished and consistent performances to date.

The season started with the clear objective to win the title under the guidance of new Team Director Andrea, a new crew line-up with Thierry, Andreas, Dani and nine-time WRC champion Sébastien, and an ambitious plan of development for the i20 Coupe WRC.

We were hopeful that 2019 would be the breakthrough year. Close daily cooperation with our colleagues at Hyundai Motor Company in South Korea enabled a truly international working relationship, and ensured all of the work from Alzenau makes a direct contribution to Hyundai’s N performance brand.

While test and development teams focused on identifying areas for improvement and enhanced performance from the technical package, there was also a bold decision to rotate crews in order to field the most competitive line-up at each round of the championship.

It was a move that proved any critics wrong. Not only was the Hyundai i20 Coupe WRC securing wins on gravel and tarmac, showing pace on snow and at altitude, but the crews were also delivering impressive results. We tackled the challenge head-on and were not afraid to take big decisions along the way.

Thierry contested all 13 of the rounds that took place and finished second in the drivers’ classification. He was ably supported by the other crews, which also included Craig in Finland and Wales GB. Andreas helped secure a 1-2 for the team in Argentina with a strong second place, and ultimately took fourth in the standings; Dani took a spectacular win in Sardinia, his first as a Hyundai Motorsport driver; Sébastien put his years of experience to excellent use to register the team’s podium in Chile, while Craig was so competitive in Finland that he was able to support his teammate’s title efforts.

Our Team Director Andrea said: “Throughout the WRC season, we rarely have the opportunity to take stock of what we have achieved. It has therefore been nice to share our manufacturers’ title with those who have made it happen – the team at Alzenau. The decision to rotate crews proved to be the correct one and I am thankful to them for understanding and accepting this, even when it wasn’t always easy.”

Alongside the WRC successes over the years, we have also developed our own Customer Racing infrastructure, becoming a valuable asset to Hyundai Motor Company and demonstrating high performance through championship titles with the i20 R5, i30 N TCR and Veloster N TCR cars.

Our customer team and driver secured the WTCR titles in 2018, and the i30 N TCR has gone onto show similar performance in 2019. Meanwhile, having helped crews to victory in rallies around the world, we recently announced performance upgrades to the newly renamed i20 R5 ’20. There is also a brand new chapter opening, as attention turns to electric racing.

Andrea said: “With our WRC, Customer Racing and electric racing programs coming together under roof, we are starting to show that Hyundai is a true force in motorsport. We have added an historic WRC title to our WTCR accolades from last season, and we’ve shown that we are all team players unified by a clear objective of delivering results for Hyundai.”

Scott added: “Alongside our Customer Racing and new electric programs, we are able to use WRC to demonstrate Hyundai’s high performance prowess and credentials,” said Scott. “There is always room for improvement, and our focus has already turned to the next chapter in our history: WRC will play an equally big part in what comes next.”

*Subject to the official publication of the results by the FIA