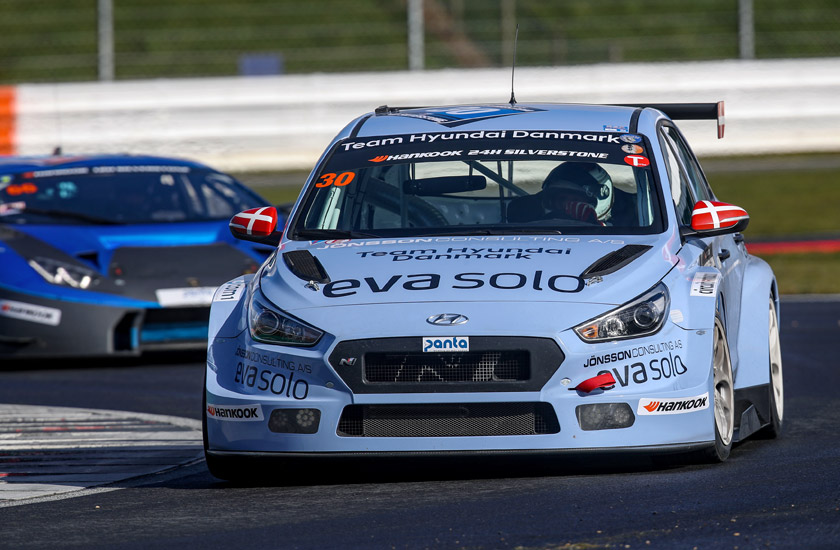 Our first customers for circuit racing enjoyed a positive start to their 2018 season, as the i30 N TCR had its first competitive outing of the year.

The UK’s Silverstone circuit played host to the i30 N TCR from March 8-11, as Hyundai Team Denmark took on the might of the Silverstone 24 Hours with a five-man driver line-up.

The team had only been able to carry out minimal running before arriving at the circuit for the event, which is part of the Touring Car Endurance Series. They therefore approached the weekend as an extension of testing as they make the move up to the TCR category.

Despite treacherous conditions that brought heavy rain to the track, the Hyundai Denmark supported team were on the pace in every session. In the best of the race conditions, they set the fourth fastest lap in the TCR class.

British driver Lewis Kent was at the same track earlier in the week as part of the official TCR UK series test day. Kent is stepping up into TCR-specification competition as one of the first drivers to sign up for the new championship.

The one-day session gave him the opportunity to add to his testing mileage ahead of the first round, scheduled for Easter weekend.

Away from the track, BRC Racing Team presented a special event at its headquarters. Gabriele Tarquini and Norbert Michelisz, its drivers for the upcoming FIA World Touring Car Cup (WTCR), joined forces with TCR Italy championship drivers to unveil their i30 N TCR liveries for the year ahead.

“The 2018 season is well underway,” said our Customer Racing Deputy General Manager, Andrea Adamo. “With the debut of the Danish team at Silverstone, our i30 N TCR customers are beginning their campaigns. The racing season will be starting in the next few weeks, our customers are set to begin the year in very good form.”