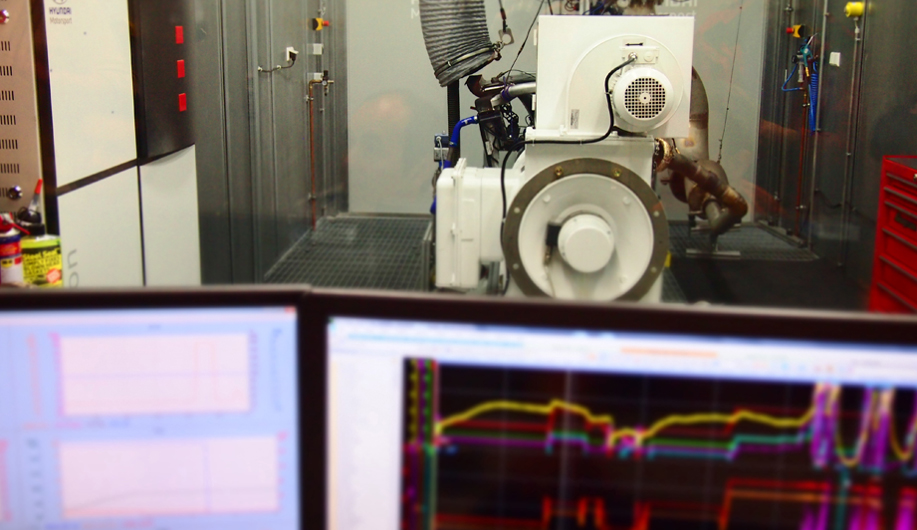 Modern day WRC cars are built to withstand the most extreme conditions. From the sub-zero climate of Sweden to the searing heat of Mexico, the differences could not be starker. Where the engine is concerned, the pressure is on our engineers to develop a unit that not only can cope in such contrasting conditions, but one that can also fight at the front.

We at Hyundai Motorsport are always seeking to utilise the latest available technology to remain competitive in the challenging world of the WRC. It is for this reason that we decided to add a second engine dynamometer to our ever-evolving facilities in Alzenau, Germany in early 2017, to help boost our chances of creating the best machine possible.

Better known by its shortened form  dyno  or indeed as an ‘engine test bench’, the machine is a vital tool in developing our power unit for the rigours of the WRC.

Between rallies, it is the job of our testing team to inspect the three competing engines for damage, before either signing off on them or carrying out the necessary repairs. They are also responsible for the spare engine, which must also be kept in perfect rallying condition in case it needs to be called upon at any moment in the season.

Working alongside this crew is our dyno team, whose role focuses on developing the engine and ensuring that is operating at its ultimate capacity throughout the campaign. Throughout the course of a WRC season, each team have a number of development jokers at their disposal. These permit us to introduce a new specification engine for WRC competition as and when they desire, thus demonstrating the invaluable nature of the dyno team’s ongoing research and development.

However, the dyno is not only used to assess the base performance of the engine during the development phase. In fact, it can also be adapted for rally-specific conditions.

Altering the ambient temperature between extreme heat and cold can provide our technicians with vital data with regards how conditions can affect engine performance. This allows us to best prepare the cars for conditions ranging from the Swedish snow to the scorching Sardinian summer.

It is also not only temperature that can be simulated within the dyno facility though. Events such as Rally Mexico can take place at an altitude of nearly 3,000m above sea level. The decreased air pressure at such heights means that performance can suffer due a lack of airflow into the engine. Now however, our engineers can better understand and work to remedy the effects of altitude on the car by creating a vacuum of low environmental pressure, simulating the conditions of rallying at height.

With 2017 regulations allowing increased power from the WRC engines  up to 380bhp  there is no room for developmental error.

Of the hundreds of components inside a WRC engine, each one has to be meticulously tested. It is inside the dyno where the constructed unit is pushed to its limits, with force, torque and power all measured and monitored. The addition of our second dyno means we can rely on the most sophisticated techniques to maximise our engine performance at all times  no matter where we are, or indeed, where we are competing.