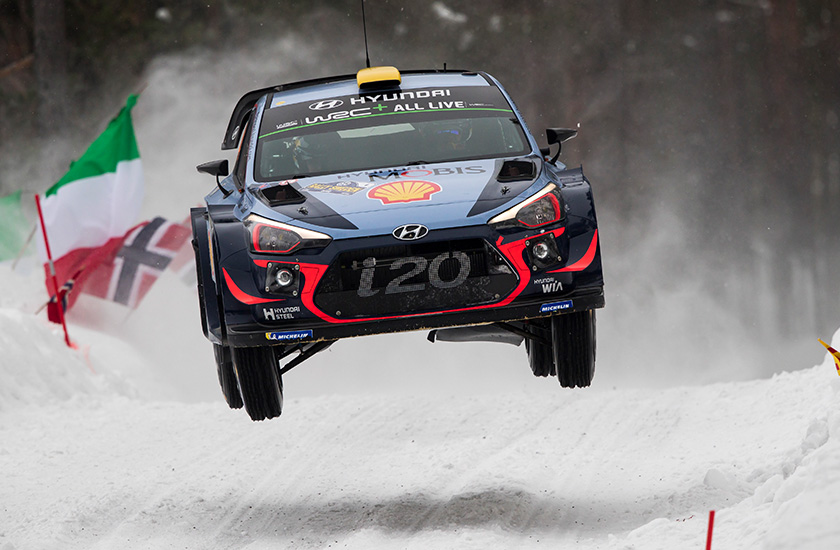 Fresh snow made for picture perfect conditions on the first full day of action at Rally Sweden. It was an ideal start to the second WRC round of the 2018 season for our team as our crews locked out the top three positions.

The snow wasn’t a welcome sight for all crews, particularly those with an earlier road position, but it produced a thrillingly close and competitive start to the popular rally.

Stages ran from Sweden into Norway with a lunchtime service in the Swedish service park splitting the two loops. The itinerary concluded in Torsby where our crews stamped their authority with our first stage 1-2-3 since 2016!

“We have seen some tricky Rally Sweden conditions,” reflected our Team Principal Michel. “The fact we are currently leading the rally with a 1-2-3 is an added bonus but not something we are getting carried away with.”

Each of our three crews secured stage wins on Friday. Thierry and Nicolas scored the fastest time in SS3 (Svullrya) to move into the rally lead, which they held for the rest of the day.

“What a day,” commented Thierry. “The car felt good, the settings were spot on and I felt comfortable. Every time I pushed I felt that I was creating faster lines for the guys behind to follow, so it was a tricky balance.”

With Norwegian flags lining the stages, Andreas and Anders made an immediate impact, finishing SS4 (Röjden) as the quickest crew.

“We used the morning loop to build our confidence and rhythm,” said Andreas. “I have been really pleased with our progression. I’ve thoroughly enjoyed driving at home with the stages in Norway.”

Hayden and Seb took two stage wins on Friday (SS5 Hof-Finnskog and SS8 Torsby), marking a competitive start to their 2018 WRC season. They are involved in a scintillating battle for third place and are also within striking distance of the lead.

“Our objective today was to get the rhythm back,” said Hayden. “We wanted to have a sensible approach to the day, and a clean run. There is room for improvement, but the positions are encouraging.”

Eight stages will be contested on Saturday. The highlight will be the iconic Colin’s Crest jump in the Vargåsen stage, where crews will endeavour to record the furthest distance.