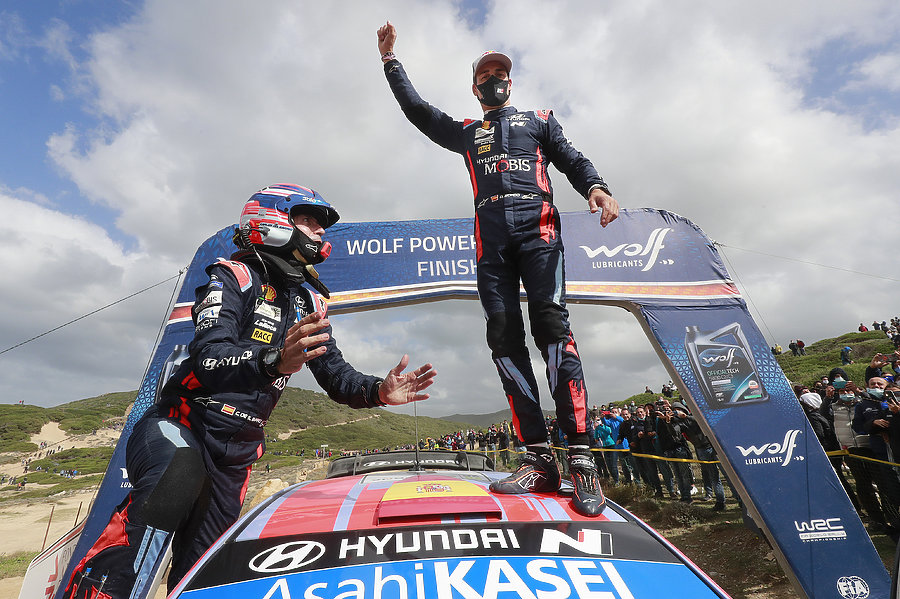 On an exciting final day at Rally Italia Sardegna, we have secured our second 1-2 result of the season to move back into the lead of the WRC manufacturers’ standings.

In a repeat of their result from 2019, Dani and Carlos put in a strong performance on the gravel stages, finishing 5.1-seconds ahead of Thierry and Nicolas, to take their second win for our team. The result is our third victory of the shortened season and our fourth in total in Sardinia.

“This is an amazing result and I am really happy to have taken my second victory for Hyundai Motorsport, at the scene of my first one last year,” said Dani. “This place is really special; we have seen a strong performance across the whole team.”

Thierry and Nicolas confirmed our 1-2 with a hard push on the Sassari-Argentiera Power Stage. It marks their third top-three result of the season and moves Thierry up to third in the drivers’ standings.

“I am so happy to finish in second place and to collect four points from the Power Stage,” said Thierry. “We did the best we could all weekend. Huge congratulations to Dani and Carlos for a beautiful victory.”

Ott and Martin, having lost time and positions due to a suspension issue on Friday morning, finished in sixth place overall, but took some consolation from setting the fastest time in the Power Stage.

“We managed to complete the rally on a more positive note with five points in the Power Stage,” said Ott. “The team is working really hard, as it has all season long, and they are doing a great job. We haven’t had things go our way, but we’ll push through and surely improvements will come.”

The performance of our i20 Coupe WRC was underlined with eight stage wins, five of which were scored by our Spanish winners. It wasn’t a smooth end to the rally for Dani and Carlos, as they saw a 27-second lead reduced to just 5.1 after the Power Stage, but it was the final result that mattered.

“Things were a bit too close by the end,” admitted Dani. “Still, we were able to get the job done and to help the team move into the lead of the manufacturers’ standings. Mission accomplished.”

Our Team Principal Andrea summarised: “I am very pleased to have taken a 1-2 in Sardinia and to see us back in the lead of the manufacturers’ championship. My team – all the engineers, mechanics, drivers and co-drivers – have been completely focused. I am amazed at what they have achieved once more, and I am happy to see how they are all working together in pursuit of our goals.”

The seventh and penultimate round of the 2020 season, Ypres Rally Belgium, will take place over the weekend of November 19-22.

2020 FIA World Rally Championship for Manufacturers’ Standings
After round 6

2020 FIA World Rally Championship for Drivers’ Standings
After round 6