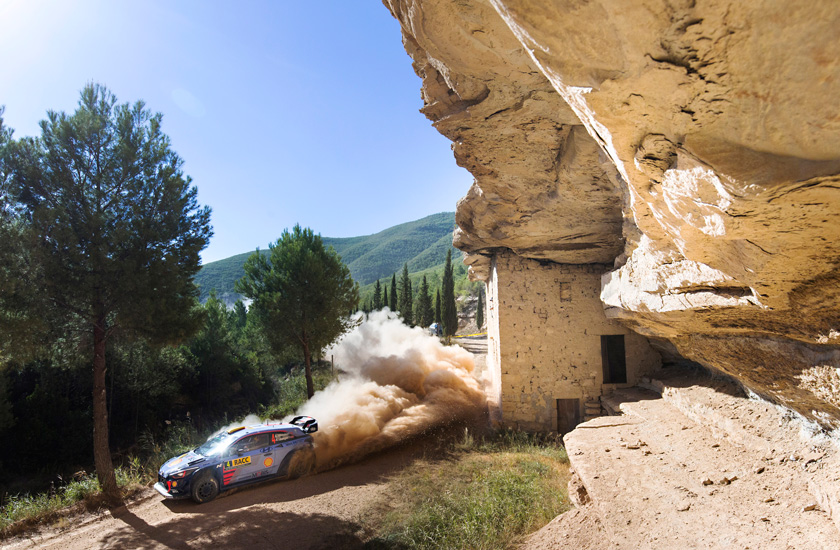 What a way to make a first impression! Our Norwegian recruits Andreas and Anders have topped the timesheets at the end of the first day of stages in Rally de España.

The crew, driving an i20 Coupe WRC for the first time in rally conditions, wasted no time getting acquainted with their new car. With a stage win in SS3, and close competition throughout the day, they ended Friday with a slender 1.4-second advantage over Championship leader Sébastien Ogier.

“We could not have asked for a better start to our Hyundai Motorsport career,” said a happy Andreas at the end of Friday. “We have become more and more confident in the car. It’s definitely been a positive start for Anders and myself.”

Our Team Principal Michel added: “To take the lead on their debut with our team is really encouraging. They have been impressive.”

Dani and Marc, in their home event, found a competitive rhythm to end the day in sixth place  only ten seconds adrift of Andreas.

“It is great being back rallying at home,” said Dani. “Tyre choice was tough  the softs were too soft, and the hard compounds were too hard, but we found a good compromise. It will be an exciting battle this weekend.”

It was a less positive day for Drivers’ Championship challengers Thierry and Nicolas. They opted for soft compound tyres, which lost them some time in the morning loop. Still, they are only 12.8s from the lead with plenty still to play for.

“It was a real pity,” admitted Thierry. “We had a good feeling in the car and we were pushing hard. It is very close on the timesheets. We may not be in the position we would want to be, but we are definitely in striking distance.”

Our mechanics face one of their toughest challenges of the season on Friday evening as they transform three cars from gravel to tarmac specification – all in a 75-minute service.

The middle day of action moves onto tarmac and takes in seven special stages over a distance of 121.86km. There will be no respite for the crews with just 13-seconds separating Andreas in the lead and Thierry in seventh! “We want to be on the pace from the very start on Saturday,” concludes Michel.