Ott and Martin take third victory of the season 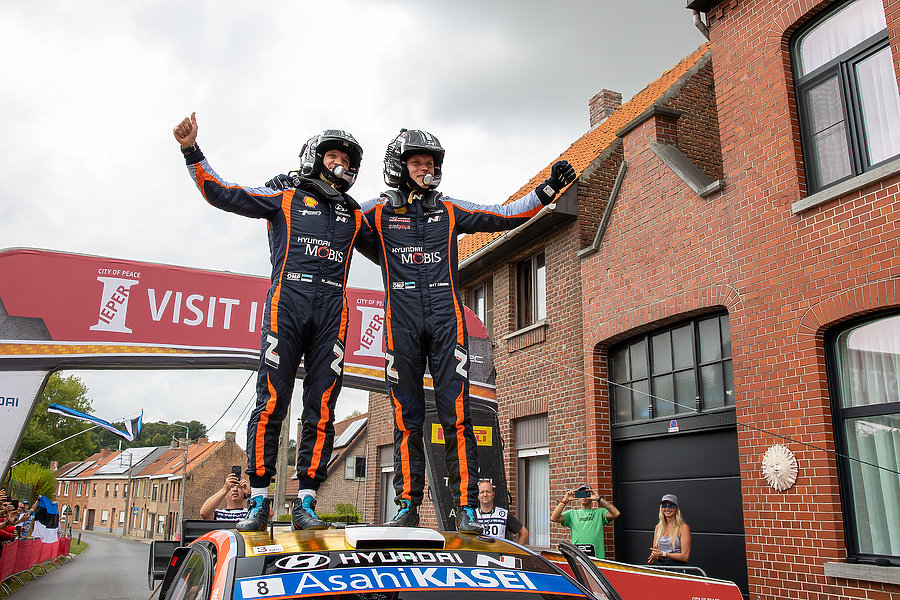 Ott and Martin take third victory of the season

Our Estonian crew Ott and Martin have secured their third win of the 2022 WRC season with a strong performance in Ypres Rally Belgium.

The result marks back-to-back victories for the pair after triumphing in Rally Finland last time out. “To win in Ypres is a big surprise for us, just as it was in Finland,” said Ott. “We were not expecting to come here and take the victory, but it is great to see such strong results coming.

On a competitive weekend for our i20 N Rally1 car, Oliver and Elliott claimed their best-ever finish in fourth. The duo used the weekend as a valuable learning opportunity after a challenging period lately.

“It is fantastic to have such a great result finally,” said Oliver. “We have come close many times, but it is nice to get the whole package working so strongly together. It has definitely been a hard couple of weeks; the team has been incredibly supportive.”

Our crews were on competitive form from the start of the 20-stage rally with six stage wins on the opening day, including two 1-2s and a joint fastest time for Ott/Martin and Thierry/Martijn. Our Belgians ended Friday with a lead of 2.5 seconds and headed into the penultimate day in positive spirits.

They added more stage wins on Saturday to increase their lead but in SS15, Wijtschate, disaster struck as they ended up in a ditch on a dirty left-hand turn. Despite the obvious disappointment, the pair fought back on Sunday to salvage three Power Stage points from their home rally.

Thierry reflected on the weekend: “From my side, the most positive thing to take away from this event is the reliability and performance of the car. Unfortunately, we couldn’t get the win, but at least we were able to have some fun, and we hope the fans did as well.”

Ott and Martin picked up the reins and claimed our second Ypres Rally Belgium win in a row. “This is a great victory,” said our Deputy Team Director Julien. “We have taken back-to-back wins, first on gravel in Finland and now on tarmac in Ypres, so we have shown the car is capable of winning everywhere and this is really encouraging. We have a very positive dynamic right now, and perhaps the biggest challenge we have in front of us is to maintain this trajectory.”

2022 FIA World Rally Championship for Manufacturers’ Standings
After round 9

2022 FIA World Rally Championship for Drivers’ Standings
After round 9