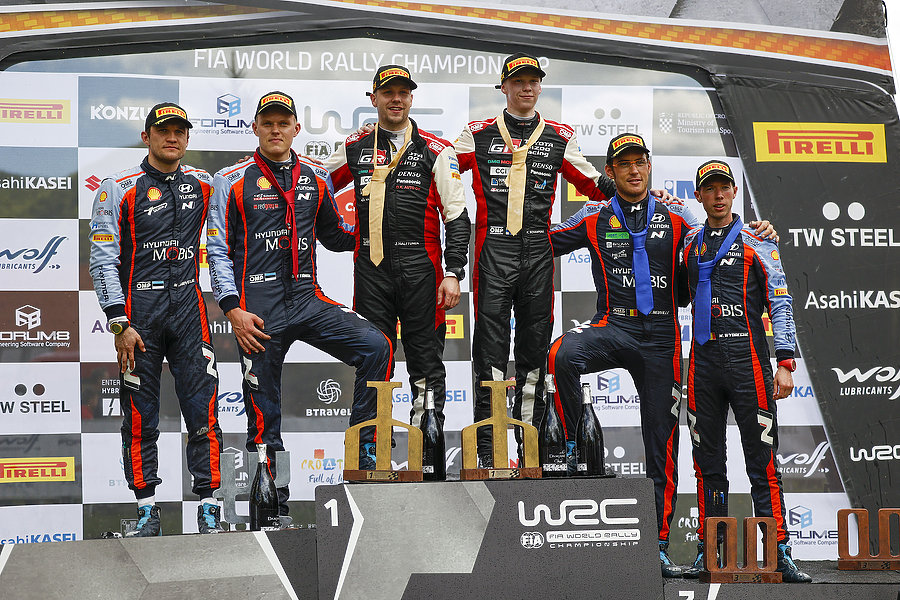 A thrilling weekend of WRC action in Croatia saw us involved in a close fight for victory, which went right down to the wire in a dramatic Power Stage.

We completed the tarmac rally with our first double podium finish of the 2022 season, with Ott/Martin in second and Thierry/Martijn in third. The story of the rally was far from straightforward with inclement weather conditions placing great importance on tyre selection and crew concentration.

After Friday’s eight stages, our Estonians were in second place overall, but with over one minute of time deficit. Clever tyre calls on Saturday allowed them to take a stage win in the demanding SS11 (Platak), as the rally leader ran into trouble, closing the gap to under 20 seconds.

The scene was set for a nail-biting final day with four stages remaining, and more wet weather in our forecast. Another shrewd rubber choice saw Ott and Martin take their second stage win and move into a slender 1.4-second lead. There was all to play for! Despite a trouble-free run, the pair had to relinquish their brief lead and settle for second spot – securing their first podium finish of 2022.

“Compared to where we were on Friday evening, where we ended up today was not so bad,” said Ott. “We were lacking the kind of pace to compete directly with the other guys, but we were clever with our tyre choices, which played out well.”

For our Belgians, the weekend was affected by two minutes of time penalties which hampered their progress. They retained their composure and focus to keep the podium in sight, entering the final day just 4.3 seconds from third place.

They wasted no time on Sunday morning, ending the opening loop with a confident stage win and following that up with an assured performance in the wet. Even a dramatic moment in the Power Stage couldn’t stop the duo from claiming their second consecutive podium result.

“We always try to take the positives away, and we can certainly be happy with third,” said Thierry. “The car felt good, the roads were beautiful, and it was fun. At the end, the team has been rewarded with a 2-3 result, and strong points for the manufacturers’ championship.”

Oliver and Elliott were unable to complete their Croatia Rally after spinning out in the slippery conditions on Saturday morning’s opening stage. “This has been one of the most difficult rallies I have ever done, crazy demanding, but we have lots more experience now to prepare us better for the future,” said Oliver.

Our Deputy Team Director Julien summarised: “That was an incredible end to Croatia Rally, and we come away with a double podium result, which is very good for us after a difficult start to the season. We struggled at Monte-Carlo, we reacted well with second place in Sweden, and now we have a double podium, so we are showing improvements. As a team, we are hungry, and we want more. We’ll keep pushing in this direction.”

Action moves back to gravel for the next round of the championship, Rally de Portugal, which takes place May 19-22.

2022 FIA World Rally Championship for Manufacturers’ Standings
After round 3

2022 FIA World Rally Championship for Drivers’ Standings
After round 3