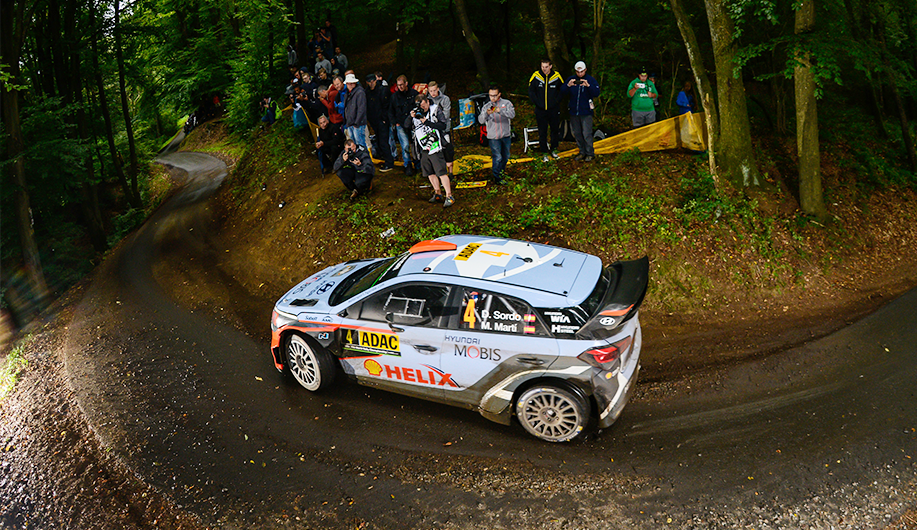 What a spectacular way to end our home rally. Two stage 1-2s, Power Stage victory, two crews on the podium and all three New Generation i20 WRCs inside in the top-five. That’s what we call a good day in the office!

In the end, the fight for second came down to one-tenth-of-a-second. The click of your fingers or the blink of an eye. That was all that that split Dani and Marc from a hard charging Thierry and Nicolas.

“What a finish! We knew it was going to be close but I don’t think anyone predicted it would be that tense,” said our Team Principal Michel Nandan.

With just four stages left to run, the pressure was mounting between three crews in the fight for second position. As Sébastien Ogier made his way to a third victory of the season, all eyes were on the podium battle.

As Sunday’s action got underway, Dani and Marc moved up to second with a stage win in the opening Dhrontal test. It was a 1-2 for our team with Thierry and Nicolas right behind. Our Belgians reversed the result on the subsequent Sauertal stage, to lead another team 1-2.

The repeat of Dhrontal was cancelled for spectator safety reasons so it was down to the Power Stage. Thierry and Nicolas put in an inspired performance to claim the Power Stage win and three extra driver points, but it wasn’t quite enough to move ahead of Dani and Marc.

“That was unbelievably close,” said a smiling Dani at the end of his run. “I’m delighted to take my first podium of the season. We have come close so many times this season so it’s great we’ve finally done it!”

Thierry was equally pleased to take his third podium of 2016  following third place in Monte Carlo and victory in Sardinia. “We did all we could. I am happy to share a double podium result. We showed our potential with two stage wins. It wasn’t quite enough but it could not have been any closer,” he said.

With our factory in Alzenau around two hours from the Rally Germany service park, we’ve had a lot of extra home support this weekend.

To see all three crews in strong points-scoring positions is a fantastic reward for the efforts of our entire team  and also for our fans who always give us such great support.

“The team has to be commended on a job well done,” said Dani. “To have two cars on the podium is a wonderful result.”

“Thanks to the team for giving us a car that could be so competitive,” added Thierry. “It’s a special result after a complicated weekend in unpredictable conditions.”

Hayden was also full of praise after a difficult weekend for our Kiwis. “The double podium is a great reward for everyone’s effort back at Alzenau,” he said after finishing fifth. “It’s not been a straightforward rally for us but I am pleased to have ended it on a positive note. We have made small improvements which will help us for the next rally.”

The result from Germany means we have now extended our grasp on second place in the WRC Manufacturers’ Championship with 201 points.

It’s now a long break until WRC returns to action at Tour de Corse, where we want to continue our most competitive season to date.

“The Germany result gives us the confidence in the performance of the New Generation i20 WRC on tarmac,”concludes Michel. “We will use the time before Corsica to review all we’ve learned and to prepare as best we can for the final four rounds of this season.”