Down to the wire

Day 3: Fourth and fifth helps us close the gap in the manufacturers chase 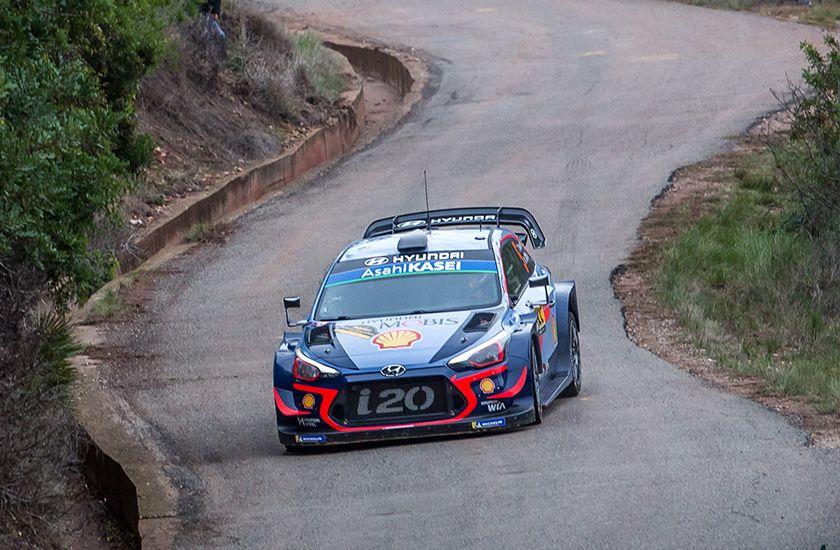 Day 3: Fourth and fifth helps us close the gap in the manufacturers’ chase

A thrilling end to Rally de España saw our crews Thierry/Nicolas and Dani/Carlos finish in fourth and fifth places respectively, guaranteeing the 2018 WRC title fight will be settled at the season finale in Australia.

Sunday’s itinerary resulted in an exciting final day of action with four stages contested over 61.70km. A repeated loop of the 16.35km Riudecanyes and 14.50km Santa Marina routes separated by a mid-morning service offered plenty of opportunity and drama.

For our Belgian crew, who had moved up into the podium positions after a difficult start to the rally, a broken right-rear rim in the Power Stage dealt a cruel blow.

“We were unlucky,” summarised Thierry. “There was a stone in the road that I couldn’t avoid and it damaged the right rear wheel rim. The title fight is wide-open heading to Australia. We won the rally from second on the road last season so everything is possible.”

Thierry has been forced to relinquish the lead of the drivers’ table to Sébastien Ogier with just three points separating the duo heading to the season finale. With Ott Tanak 23 points adrift, it remains a three-way fight for this season’s title honours.

In the manufacturers’ table, our Spaniards helped us to close the gap with their fifth placed finish. We are now just 12 points behind Toyota Gazoo Racing, but only 13 ahead of M-Sport Ford, meaning the championship chase will go right down to the wire.

“It was not an easy event to read from a strategy point of view,” said Dani. “We were in the fight right until the end and it was definitely an exciting rally for all of the fans. I hope we have given the spectators the entertainment they have become used to watching.”

There was little positive reflection for our Norwegians Andreas and Anders, as they finished tenth in Spain. “We have to keep our heads up and put our full effort into the final round of the season in Australia, and to support the team and Thierry as best we can,” said Andreas.

“We have seen a change in the drivers’ lead with Sébastien now in front, but at least that means Thierry won’t be opening the road in Australia,” said our Team Principal Michel. “We have managed to reduce the gap to Toyota in the manufacturers’ championship. The fight will be settled at the final round of the season. Rest assured, we will give it all we’ve got!”

2018 FIA World Rally Championship for Drivers’ Standings
After round 12

2018 FIA World Rally Championship for Manufacturers’ Standings
After round 12