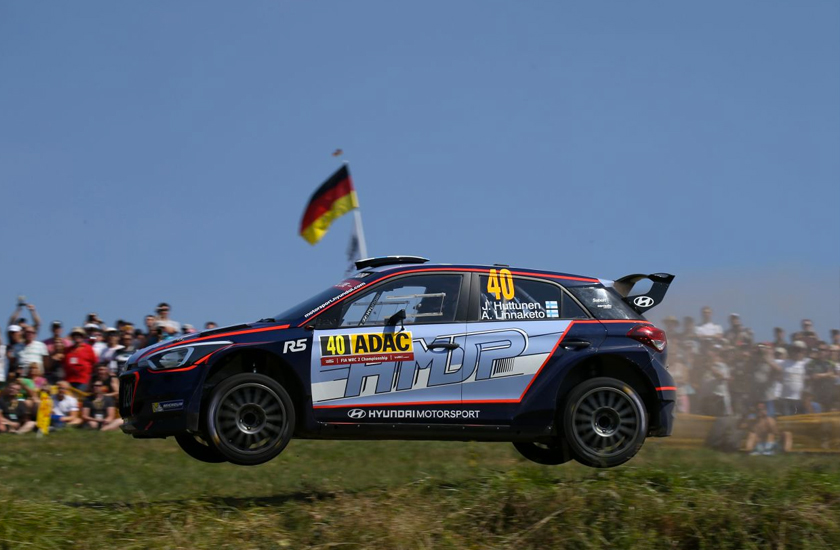 Making their tarmac debut in the i20 R5, our HMDP crew Jari and Antti put in a promising performance in Rallye Deutschland, their fifth WRC2 event of 2018.

Our Finns have twice competed in Germany before, but never before in the competitive WRC2 class. The 18-stage rally offered them a valuable learning opportunity on familiar stages.

The rally saw crews negotiate vineyard-lined routes above the Mosel valley on Friday before moving onto the military roads of Baumholder on Saturday. Three final stages on Sunday morning in the open countryside meant that there was no respite.

Getting up to speed

Following a super special at St. Wendel on Thursday evening, Jari got up to speed quickly on Friday morning’s loop. Third and fourth fastest times respectively on the two runs through the 9.27km Wadern-Weiskirchen stage enabled him to finish in eighth overall at the end of the opening day.

The iconic Panzerplatte, the longest stage of the weekend at 38.57km, dominated Saturday’s schedule. On the first attempt in their i20 R5, our HMDP duo claimed the third quickest time and headed into lunchtime service up to sixth in WRC2. Unfortunately, bad luck struck on the repeat loop.

“We had an alternator belt issue and had to stop to change it,” explained Jari. “My experiences in the Hyundai Motorsport workshop have prepared me well for these eventualities. We then had a turbo problem, which forced us to stop completely for the day. It was a real disappointment as we had moved up to the top-six at that point.”

Re-joining under Rally 2 on Sunday morning, with two passes through the 29.07km Grafschaft and the 14.97km Bosenberg Power Stage, Jari and Antti enjoyed a strong conclusion to their rally with more top-six stage times.

“We were back on the pace on Sunday morning so we were able to end in a positive way,” said Jari. “It has been quite a mixed rally, with some positive moments and a few issues.”

Our Team Manager Alain was pleased with the weekend: “We are satisfied with the performances of Jari and Antti,” he said. “It was their first WRC2 event on tarmac and with our i20 R5. They were able to set some very encouraging times, occasionally in the top-three against some tough opposition.”

?2018 FIA WRC 2 Championship for Drivers’ Standings
?After round 9?