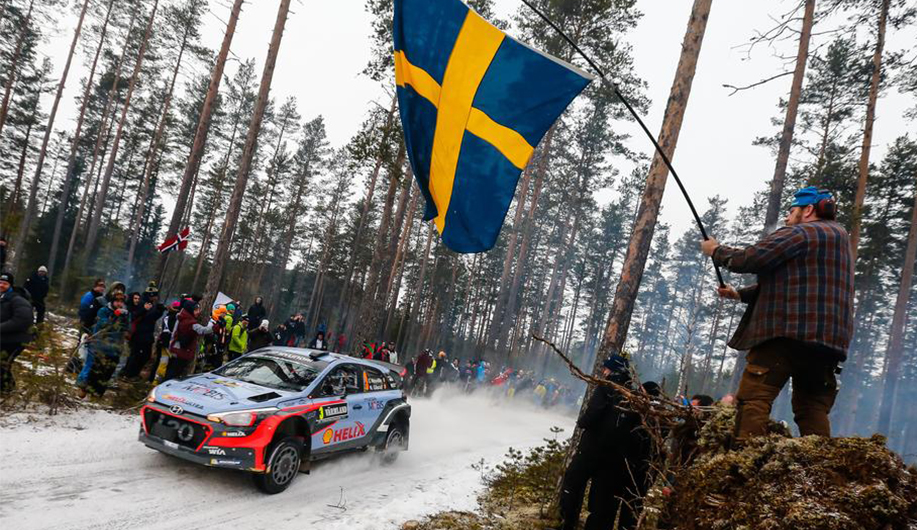 February 12, 2016  Our team has made a promising start to Rally Sweden, second round of the 2016 FIA WRC, with two drivers in the top five at the end of Friday.

Today the New Generation i20 WRCs crossed between Sweden and Norway on the first day of an altered Rally Sweden, which has seen some stages cancelled due to insufficient snowfall.

“It’s pleasing to be involved in such a close battle for second place” said the Kiwi, “but we’re still only in the early stages of this event so we’re not going to get carried away. Road position has played a big part in today’s stages. We knew we’d have an advantage in the afternoon loop but, still, it’s nice to have capitalised on that. I was getting more confident in the car with each stage but there is still work to do to improve my feeling with the New Generation i20 WRC. Today was my first day of rallying with the new car so it’s natural that we are still learning. The final stage today was the best of the lot with a lot of grip and consistency, which gave me the confidence to push. We’ll see if we can find more improvements tomorrow but for the first day it’s not been too bad.”

Dani is close behind Hayden in fifth place after a consistent day of rallying. Just 15 seconds separate second from sixth at the end of day one.

“We have had a pretty good day all in all,” said the Spaniard. “I have really enjoyed these stages. This is the first time I have been in Sweden as a Hyundai Motorsport driver and it has been fun to experience the New Generation i20 WRC on these stages. The afternoon was a bit harder than the morning because the car started to move a bit at the rear but we are fifth and in the middle of a very close fight for second. It’s a good start and we must continue in this way.”

Thierry started today well but transmission problems unfortunately slowed him. With no lunchtime service, we have been forced to wait until this evening to check the problem.

“It’s been a frustrating and difficult day for us,” admitted the Belgian. “We started the morning with confidence and things were going well. We had two clean runs and were third in the overall classification. We had a transmission problem in SS4 and lost a lot of time. There was no lunchtime service and it was not a problem we could fix ourselves, so we had no choice but to persevere. We tried our best but it was really tough. The team will look into the problem tonight and we will start afresh tomorrow hoping to regain the pace we had this morning.”

It has been a solid start to the Swedish rally and we hope a strong performance will keep our 2016 momentum going.

“It’s been a good start to this rally,” commented Team Principal Michel Nandan. “After all the discussions about the weather this week, it’s good to focus on the fantastic action that these stages have to offer. We have had stages in Sweden and Norway today, with no lunchtime service, so it’s been an intense day for our drivers. Hayden and Dani have both had strong runs and are firmly in the exciting battle for second place. Thierry’s positive start to the day unfortunately ended on the final stage of the morning loop when he developed transmission problems. We have to look into the issue and fix it before tomorrow. The lack of lunchtime service meant there was no way to resolve it sooner so it was a long, tough afternoon for him. We’re remaining focused on our job and are, of course, continuing to improve the performance of the New Generation i20 WRCs but there’s no reason why we can’t aim for the podium again.”