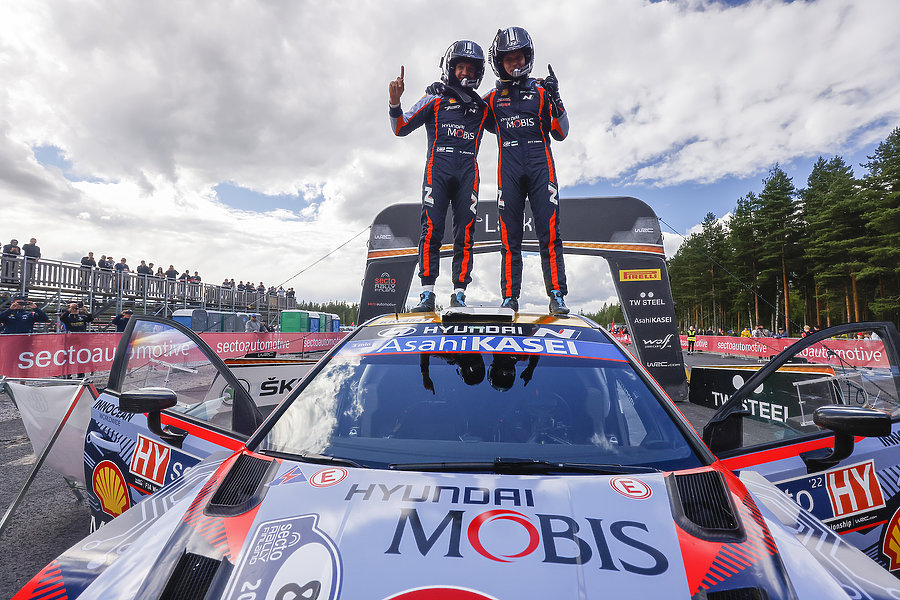 On a thrilling weekend in Rally Finland, we have taken our second victory with the i20 N Rally1 after a stunning performance for Ott and Martin.

Our Estonians were on the pace from the opening day, leading from SS2 right up to the Power Stage. They ultimately won by 6.8 seconds, taking our first-ever win in Rally Finland.

“This is a special victory,” said Ott. “There have been quite a few wins in my career, but this is definitely up there with the best. We started the rally at the front and that’s when we were able to take the advantage.”

Leading from start to Finnish

Thierry and Martijn secured a solid fifth place, after an encouraging and trouble-free weekend. Our Belgians won the first stage of the rally on Thursday evening to ensure we led the event from start to finish.

“It was a tough weekend for us, but we knew that would be the case coming here,” said Thierry. “Ott has put in a good performance; he was on the pace from the start and once you’re in the game you can keep the rhythm.”

For Oliver and Elliott, their Finland weekend was over almost as soon as it had started. A roll at the start of Friday’s opening loop damaged their car too greatly to continue.

“It’s difficult to take, and I am just devastated for the whole team who have worked so hard,” said a dejected Oliver. “We must look onwards and upwards.”

The victory in Finland reflects the determination and hard work of our entire team. Demonstrating a never-give-up attitude and pushing the boundaries to improve the pace of our car, we have taken an impressive win at an event that has previously proved elusive.

“A fantastic achievement for everyone,” reflected our Deputy Team Director Julien. “We will celebrate this moment, but we keep on pushing for more results like this in the remaining events of the season.”

The next round of the 2022 WRC season will take place at Ypres Rally Belgium from August 18-21.

2022 FIA World Rally Championship for Manufacturers’ Standings
After round 8

2022 FIA World Rally Championship for Drivers’ Standings
After round 8