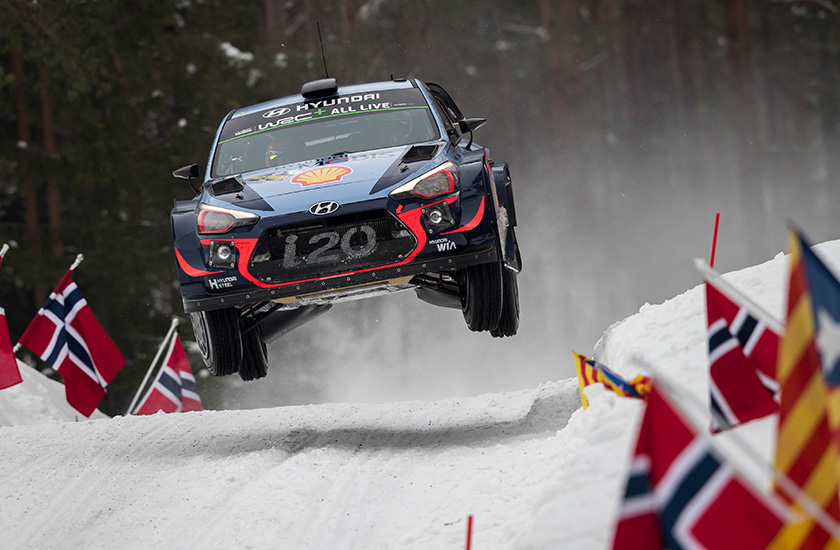 World rally cars often have the ability to leave us breathless. Saturday’s action in Rally Sweden more than lived up to expectations with a high-flying Thierry and Nicolas providing one of the most impressive moments of the short season so far.

Our Belgians took four stage wins on the penultimate day, including a triumphant performance through Vargåsen, with its famous Colin’s Crest jump.

“I actually touched the inside bank, which created some exciting images for the fans,” said rally leader Thierry. “I think Colin himself would have called that ‘a little moment’ but we were still able to register the fastest time.”

They head into Sunday with a 22.7s lead over Citroën’s Craig Breen.

Saturday’s action took place on classic Swedish roads near to Hagfors, covering a total stage distance of 120.31km. The day didn’t get off to the best start with two of our crews experiencing spins on the same stage.

“We had a spin in SS10, the second stage of the day, and lost around 15 seconds,” said Andreas. “We touched a bank and had to reverse out.”

Our Norwegians recovered strongly and are hoping to secure a podium finish on Sunday. “There is a near ten-second time deficit to Craig,” noted Andreas, looking at second place. “We will give it a good go. It’s not impossible.”

Hayden and Seb gained confidence throughout the day to keep up with the front-runners. Despite losing some time in the final stage of the day, the duo remains upbeat.

“Not quite the day we wanted but we are still enjoying ourselves and doing the best we can,” said Hayden. “Unfortunately, we lost a little time stuck in a snow bank on the final stage, but we are still in a good position to push on tomorrow.”

Three stages remain on Rally Sweden’s 19-stage itinerary, a total of just 51.94km. Two runs of the 21.19km Likenäs test will be followed by a repeat of the 9.56km Torsby stage, initially contested on Friday when we registered a 1-2-3 finish.

“It’s going to be exciting for the fans, and most likely nerve-wracking for us,” admitted our Team Principal Michel ahead of the final morning. “We are prepared to fight for victory,” said Thierry.