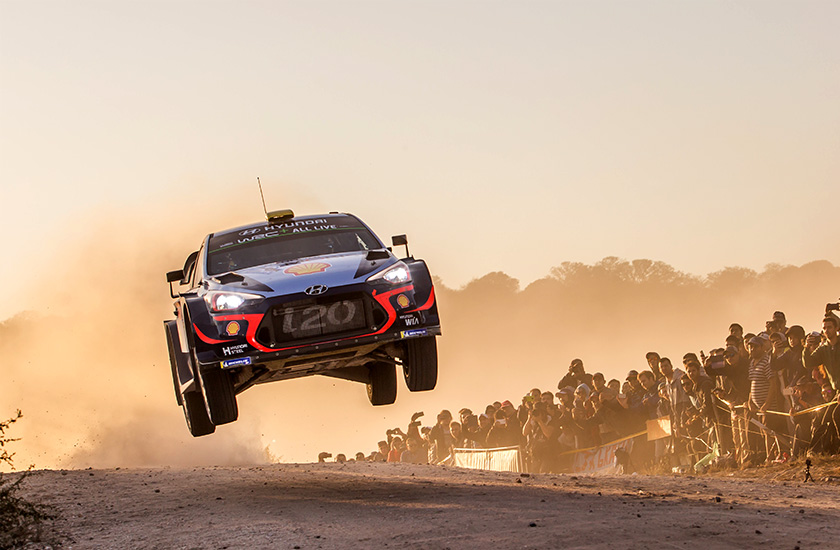 Rally Argentina is an event where split seconds count. In the past two seasons, the fight for victory has gone right down to the Power Stage. The opening day of this year’s rally has been equally close with all three of our crews fighting at the front during Friday’s stages.

With passionate crowds cheering on all the competitors, we kicked off Rally Argentina in the same style as we left off twelve months ago  with a stage win for our Belgians on Thursday evening!

“I think we can be quite pleased with how this rally has started,” said our Team Prinicipal Michel. “Our crews have shown flashes of competitive pace, with two stage wins and even fighting for the lead of the rally.”

Close encounters of the third kind

Starting second on the road order on Friday, Thierry and Nicolas lost some ground at the start of the morning loop but pushed hard in the afternoon to finish the opening day in third overall.

“We had a good feeling inside the car,” explained Thierry. “We had to avoid trouble as the stages were very rough in places. The strategy has been to keep in touch with the leaders.”

Friday’s itinerary took in a repeated loop of three stages  16.65km Las Bajadas/Villa del Dique, 33.58km Amboy/Yacanto and 23.85km Santa Rosa/San Agustin  split by a lunchtime Super Special. It was here where our Spaniards Dani and Carlos took their first stage win of the weekend.

“It has been a positive start to the rally for us,” said Dani. “I have thoroughly enjoyed driving in front of these crowds. To be fighting for the podium is where we hoped to be at the end of the first day  and it is very close.”

Just 0.9s separate our Belgian and Spanish crews. Not forgetting Andreas and Anders, who were in fact leading the rally outright in the morning loop. It was only because of a tyre coming loose from its rim that our Norwegians were pushed down the order to seventh.

“We had to be really careful because we knew one more issue would be game over,” lamented Andreas. “We’ll be ready for another push on Saturday.”

Seven more stages are scheduled on the penultimate day, including the longest individual run of the rally  a 40.48km test from Cuchilla Nevada to Rio Pintos. With 146.88km of stages to complete on Saturday, it’s all still to play for.