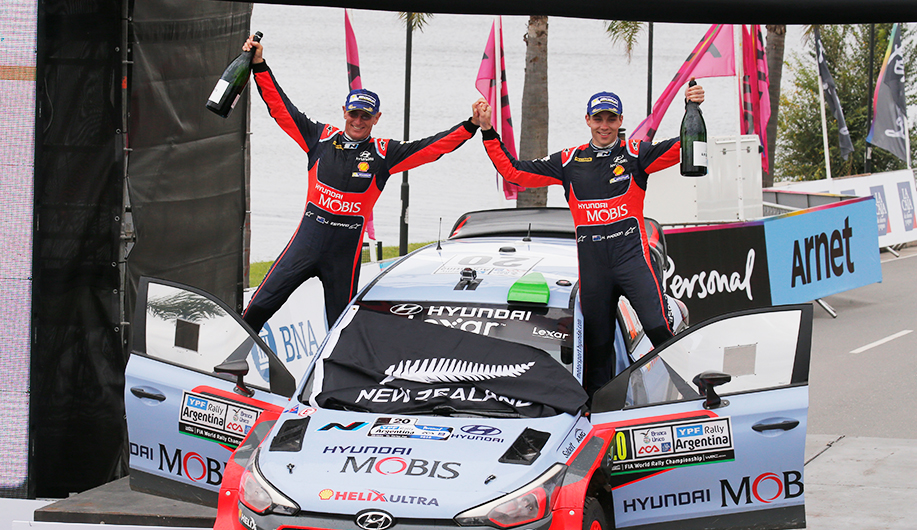 April 24, 2016  What a weekend! We’re celebrating a fantastic victory in Rally Argentina after a sublime performance from Hayden Paddon and co-driver John Kennard in a thrilling Power Stage today.

The fourth round of the 2016 WRC went right down to the wire as reigning World Champion Sébastien Ogier fought back in Sunday’s opening two stages. Hayden saw his 29.8s lead reduced to just 2.6 seconds setting up a tantalising head-to-head in the Power Stage. The Kiwi crew did not give up and drove the stage of their careers to win the stage and win Rally Argentina by almost 15 seconds.

“I can’t believe it!” said Hayden at the end of the rally. “It’s a special result for the whole team. It all came down to the Power Stage. We pushed really hard and really drove the wheels off the car! I am thankful to everyone who has supported us.”

It is the second WRC win for our team after Rally Germany in 2014, and the first victory for our New Generation i20 WRC car in only its fourth event!

“A huge amount of work has gone into the New Generation i20 WRC,” commented Hayden. “I knew from the first test that we could win with it but I didn’t quite expect it to come so soon. Everyone in the team thoroughly deserves this result  I am sure it’s the start of a lot more to come!”

Our first ever podium in Argentina continues an impressive start to the new season  and comes after Thierry’s third in Monte-Carlo, Hayden’s second in Sweden and Dani’s fourth in Mexico.

Team Principal Michel Nandan was quick to acknowledge the importance of today’s result: “This is a rally weekend we will never forget,” he said. “Hayden has put in the performance of his career. We’ve worked hard on the New Generation i20 WRC so to see the fruit of our work is very special.”

We also took our first ever 1-2 in a Power Stage thanks to a strong finale for Dani. He picked up two Power Stage points and equalled his best result of the season so far with fourth place  to give our team a real boost in the Manufacturers’ Championship.

“Today is a great day for our team,” commented Dani. “We got the maximum out of the car and can be pleased with our performance. Without the issues we had on Friday, I’m sure we could have taken a podium. Still, we have shown encouraging competitiveness and have taken some very important points for the team. Finishing second in the Power Stage was a good feeling. The car has improved a lot. This rally will give us more impetus to continue our strong start to 2016.”

Thierry will also use his experiences this weekend to build for the next rally. Our Belgian crew clawed their way back into sixth place after losing over six minutes of time on Friday. A measured approach sees him and co-driver Nicolas picking up more points and gaining confidence for the next rally.

“We had some promising stages this weekend,” said Thierry. “We were on a mission to regain the positions we lost on Friday. We started this morning knowing that the top-six was reachable but the conditions in the first stage were very difficult. We took things carefully to achieve our target and I now look forward to building on this for Portugal.”

A huge amount of work has gone into the New Generation i20 WRC. To take a debut victory with the new car in only its fourth rally is a significant achievement for the team. We’ve always taken each rally one at a time and know that there is still work to do.

“All our drivers and team members can share in this moment,” says Michel. “Dani and Thierry fought hard to overcome difficulties this weekend. We’ve never had a 1-2 in the Power Stage before so that was the icing on the cake. We will enjoy this moment but know there is more to come. We will continue pushing development of the New Generation i20 WRC. Portugal is next with a new set of demands and challenges.”