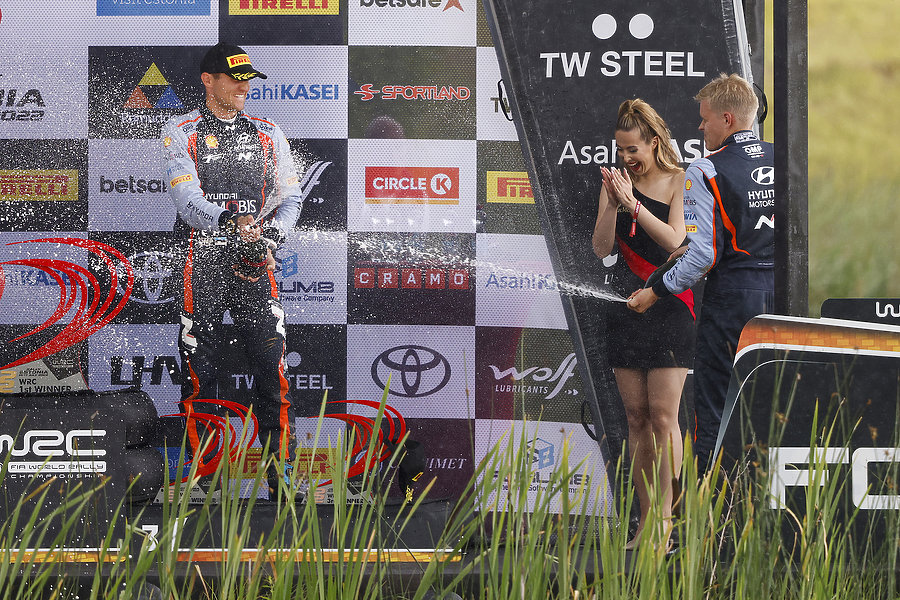 Home heroes Ott and Martin secured their third podium finish of the season in front of their supportive fans with a consistent performance in Rally Estonia.

The crew, who claimed a joint fastest time on the final morning, were routinely inside the top-three throughout the 24-stage event. Despite lacking the pace in their i20 N Rally1 to fight for the victory, a disappointed Ott found some positives:

“The real positive is the number of kilometres we have been able to complete across all three cars,” he said. “The Estonian fans have shown that they are passionate and full of support, so I am thankful to them for that; it’s just a shame we weren’t competitive.”

Extracting the most in Estonia

Thierry and Martijn adopted a measured approach to this event, knowing that it wouldn’t be one of their favoured rallies. Our Belgian pair had to be satisfied with fourth place overall.

“It has been a tough and challenging weekend for us,” said Thierry. “Somehow, we were able to come away with fourth position, which is really the best we could have expected in this event. We stay positive, continue fighting and there’s always hope for improvements.”

The weekend saw a mix of weather conditions with intermittent rain adding to the spectacle and challenge. None of our crews felt comfortable enough to push for Power Stage points due to the demanding road conditions, but all three of our cars made it to the finish.

For Oliver and Elliott, there were signs of promise within the overall complexity of the rally, as they set some impressive stage times. A string of top-four positions on Saturday afternoon gave cause for encouragement – and they added another second quickest time on Sunday too.

Oliver said: “It has been difficult to build the confidence in the car needed for these stages and conditions. The mechanics have worked hard to prepare the car. We showed some signs of promise on Saturday afternoon but have a lot of work to do to get to the proper level.”

We may not have fought for victory in Estonia, but we can find some plus points from our improved reliability.

“If you look at the level of performance, we have shown this weekend, we can’t be happy,” admitted our Deputy Team Director Julien. “We need more development on some of the fundamental parts of the car. At least we have seen no major reliability issues, with all three cars making the finish. From where we were in Kenya, that is an achievement in itself.”

The 2022 WRC season moves onto the fast and furious roads of Rally Finland, which takes place from August 4-7.

2022 FIA World Rally Championship for Manufacturers’ Standings
After round 7

2022 FIA World Rally Championship for Drivers’ Standings
After round 7