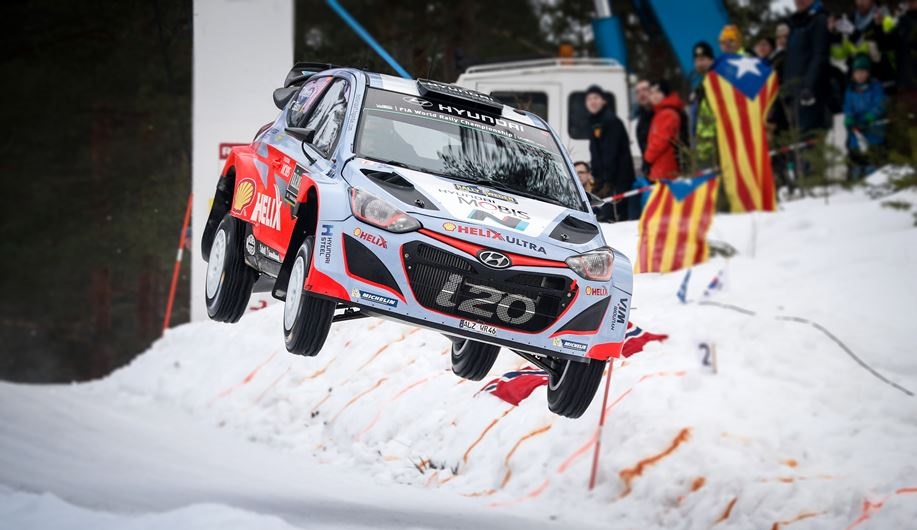 February 14, 2015  Hyundai Motorsport has its sights set firmly on a podium result in this weekend’s second round of the FIA World Rally Championship (WRC), as Thierry Neuville leads Rally Sweden at the end of the penultimate day.

The Belgian, co-driven by Nicolas Gilsoul in the #7 Hyundai i20 WRC, has continued to shine on the tricky Swedish stages as he claimed two additional stage wins this afternoon and moved into the lead of the rally after a sublime run in the final Vargåsen stage (SS18).

It was in this stage that Neuville also laid claim to this year’s Colin’s Crest Award, breaking the record for the longest jump in the Arena as he leaped a staggering 44m. It is the second year running that a Hyundai Motorsport driver has claimed the award after Juho Hänninen took the honours last season.

Making good use of a correct team tyre strategy, Neuville was embroiled in a thrilling battle for the top three during today’s eight stages and he will now aim to consolidate this performance on Sunday.

Neuville said: “It has been another great day for us and it is a fantastic feeling to be leading the rally. I have pushed hard today and have really enjoyed the stages. I don’t think I have ever felt this good with the Hyundai i20 WRC. We made a good tyre choice today and I have been happy with our performance level. We have scored some stage wins and, in the final stage of the day, the repeat of Vargåsen, I had a fantastic jump over Colin’s Crest of 44 metres. It felt like a good jump and I am proud to pick up the award. We’ve had a close battle throughout the whole event so my target for tomorrow is, of course, to keep my position, but it’s close so we have to see what tomorrow brings. I’m ready for it.”

Hayden Paddon (#8 Hyundai i20 WRC) has retained sixth place overall after a day of solid improvements for the Kiwi. In his first rally of 2015 with the Hyundai Motorsport team, Paddon’s progress culminated in a sixth place finish in Saturday’s final run  the demanding Vargåsen stage (SS18)  and allowed him to extend his grasp on sixth place.

Paddon said: “Overall, it has been a pretty satisfactory day today. We had some good stages, as well as some tough ones, but I feel we have learned a lot. My aim this morning was to secure our sixth place and then, in the afternoon, to push a bit more to increase the gap. We have made improvements today even if the conditions have still been very challenging at times. The final stage today was one of the highlights; I really enjoyed it and felt that we ended the day on a high. Now, I look forward to keeping a top six position in tomorrow’s final three stages. That would be a decent result for us in our first WRC event of the year.”

Kevin Abbring (#20 Hyundai i20 WRC) continued where he left off on Friday by acclimatising to the demands of WRC competition. The Dutchman, in his first event with the Hyundai Mobis World Rally Team, picked up the pace as the day progressed and claimed more top ten stage results, including seventh in SS15 (Fredriksberg 2).

Abbring said: “It has been another wonderful day driving the Hyundai i20 WRC here in Sweden and I am pleased with the progress we have made. It has been a more complicated day than yesterday, particularly in the morning when I struggled to find the rhythm that I had towards the end of Friday. We worked on that during lunchtime service and the results were immediately obvious from our time in SS15. We had a couple of moments during the afternoon; I misjudged the grip at a T-junction in SS16 and lost over a minute of time, and we also lost sixth gear in the final stage. I can’t complain at all; it has been an amazing learning experience, we are improving all the time and I got to do a proper jump on Colin’s Crest to end the day so I can’t ask for more than that!”

For Hyundai Motorsport, the performances demonstrated by all three drivers continues to show the development of the young team. From finishing the penultimate day of last year’s Rally Sweden with two cars preparing to re-enter the rally under Rally 2, this year there are three Hyundai i20 WRC cars in contention for strong finishes.

Team Principal Michel Nandan commented: “I am very happy with what we have achieved today, working very well together as a team to make good strategy calls in the face of tricky conditions. Even if it is only Saturday, it is a pleasure to see Thierry leading the rally and all three cars in contention for good results. This rally has seen a fantastic battle at the front and I sincerely hope this can continue right to the end, to give the fans a really exciting show. Of course, I would like our car to keep this position but a podium would be a very good result for us. Thierry has had an incredible rally so far with no mistakes and competitive stage times, A word also for Hayden and Kevin who have both continued to acquit themselves professionally, making good progress during the day. It has been a day of ups and downs in many ways but we look forward to the final day with a positive frame of mind, and an eye on the podium and our first three-car finish in Rally Sweden.”

Sunday morning will see three final stages determine the victor of this closely fought Rally Sweden. Drivers will tackle the 15km SS19 Lesjöfors stage, and two runs of the 15.87km Värmullsåsen stage, the final run of which will be the Power Stage. A total of 46.74km of special stages remain of this second rally of 2015.