Hyundai Motorsport has made solid progress in its second Rallye Monte-Carlo as the team heads into Saturday with both Hyundai i20 WRCs running in the top eight overall. 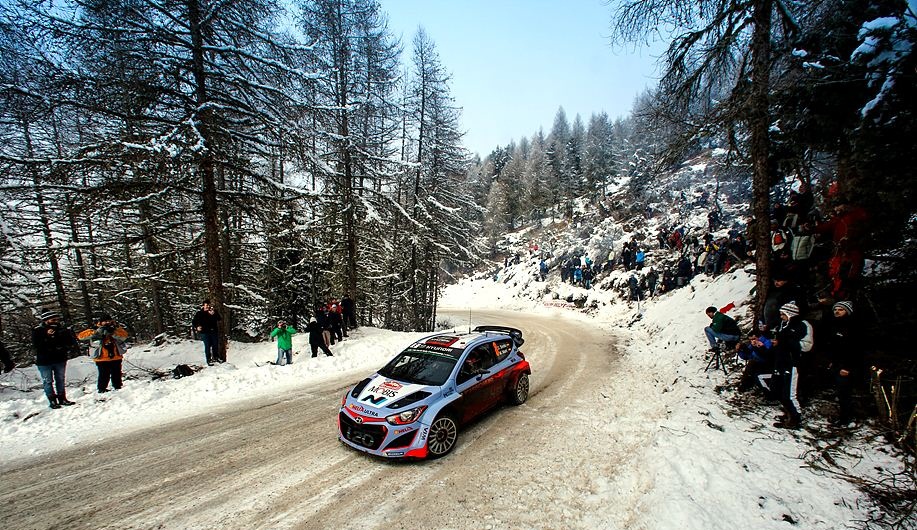 Hyundai Motorsport has made solid progress in its second Rallye Monte-Carlo as the team heads into Saturday with both Hyundai i20 WRCs running in the top eight overall.

Following a tentative start to the event on Thursday, the team made steady progress throughout Friday as tyre selection became critical in the tricky and often changeable conditions.

Both Hyundai i20 WRC cars completed all six stages today with no real issues reported from either Hyundai Shell World Rally Team crew, as they concluded Friday in seventh and eighth overall, with seven gruelling stages remaining in this season-opening rally.

Thierry Neuville resides in seventh place overall as the Belgian continues to learn the nuances of the unforgiving Monte Carlo stages. Neuville is the first to admit he is one of the least experienced drivers at Monte, having struggled in previous seasons. However, he has picked up the pace and confidence during Friday comfortably setting top ten stage times in this afternoon’s repeat loop.

Neuville commented: “It has been another very difficult day but I think I am making progress. The hardest part has been correctly predicting the conditions in the stages which can change very quickly. We had a few instances today where the stages were totally different from our pace notes so we have to adapt. Getting the tyre choice right has also been a challenge but one which we have managed pretty well, all things considered. We have continued to take a safe approach to our driving so we can reach our objective of finishing the rally. I don’t have as much experience of these stages as others so I am taking it easy and learning all the time. The final stage of the day was the one I have probably enjoyed the most so far. There are three different stages tomorrow so we will have more experience to add.”

Dani Sordo is right behind his team-mate on the overall classification as the Spaniard has made up positions after losing time on Thursday’s opening stage. He has also had a largely problem-free day and was able to show his potential in this afternoon’s penultimate stage (SS7 Aspres Les Corps  Chauffayer 2) by setting the fourth best stage time.

Sordo said: “I am definitely very happy to make it to the finish today without any major dramas. This morning’s loop was tough with a mixture of conditions  fog, ice, mud  which made it difficult to get a good rhythm and at times with poor visibility. This afternoon, we had to carefully choose the correct tyres and I think we did ok. The stage times were quite encouraging despite the terrain and that gives us something to work on for tomorrow. We have made an improvement compared to last year by finishing the second day and our focus has to be on maintaining this tomorrow. There is still a long way to go in this rally.”

Hyundai Motorsport is heading into unfamiliar territory tomorrow with four more stages. The Prunieres-Embrun (19,93km) stage will be repeated, kicking off proceedings in the morning (SS9) and afternoon (SS11). Teams and drivers will also contest the longest stage of the rally tomorrow morning (SS10  Lardier et Valenca  Faye  51.70km), while the 36.85km Sisteron-Thoard stage will bring an arduous Saturday to a conclusion.

Team Principal Michel Nandan said: “We are at the halfway point of this extremely challenging Rallye Monte-Carlo, and everything is going to plan for our team. We are very much focussed on getting both Hyundai i20 WRC cars to the end of the event and both drivers are doing a good job in this regard. We have some very long stages to cope with tomorrow and anything can happen  as we have seen today. Our Friday has been generally quite good with no real issues on either car. The drivers have had to tackle some complicated conditions and tyre choice has been key to performance. As ever at Monte, things are rarely straight-forward when it comes to predicting stages but we have put the past year of learning in the WRC to good use even if our Monte experience is limited. We look forward to building further on this tomorrow.”