Our team continues its drive for second place in the Manufacturers Championship, holding fifth and seventh overall after a difficult opening day. 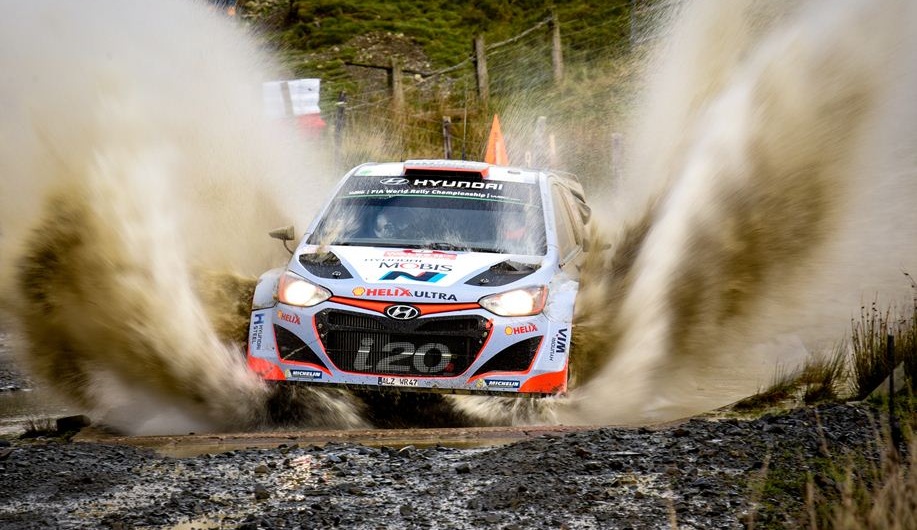 Our team continues its drive for second place in the Manufacturers’ Championship, holding fifth and seventh overall after a difficult opening day.

November 13, 2015  We have ended a difficult first day at Wales Rally GB, the final round of the 2015 WRC season, with Dani Sordo and Hayden Paddon in fifth and seventh respectively. Things did not go so well for our other two drivers, Thierry Neuville and Kevin Abbring, who were both forced to retire.

Dani was our highest-placed driver and ended the day in fifth. He claimed four top-five stage times, including a top-three finish on the second pass of the popular Sweet Lamb stage.

“We had a reasonably satisfying start,” said the Spaniard. “The first stage was a surprise because there wasn’t as much grip as expected. We made adjustments over lunchtime and had a decent afternoon loop with some top-five stage times. It’s early days so let’s see how Saturday unfolds. I enjoyed the stages today and we’ll keep pushing.”

Hayden was also surprised with grip levels in the morning. He then experienced technical issues in the afternoon, but showed composure and brought his Hyundai i20 WRC home in seventh overall.

“It has been one of those days,” admitted the Kiwi. “We had a tough morning loop because the conditions, despite looking slippery, had more grip than expected. I struggled to trust the grip  that showed from our stage times. After lunch, I was hoping to find improvements but we had a spin at the start of SS4 (Hafren 2) and it took three attempts to get the car started again. We lost 15-20 seconds, which was a shame because the conditions felt better. We then experienced hydraulic problems in SS5 (Sweet Lamb 2) so we had to run the final stage (Myherin 2) with no paddle shift, handbrake or gear display. It was a challenge to say the least. We stayed calm to get to the end and tomorrow is another day.”

Thierry’s day ended early when, in the final morning stage, his rear left wheel came loose as a result of broken wheel studs. Thankfully, he will return tomorrow and continue under Rally 2 regulations.

“We have to draw a line under this character-building day,” said the Belgian. “Our morning got off to a difficult start straight away in the opening stage after I made a small mistake at a hairpin left after the first kilometre. I had to reverse to get going which lost ten seconds. We found reasonable pace in the short second stage but, at just over ten kilometres into the final morning stage, the wheel of the car came loose. We had no choice but to stop. We were determined to find a good rhythm so we will refocus on tomorrow and Sunday.”

Kevin was also unlucky, and had to stop near the end of stage three after a leak into his car’s water system, which caused his engine temperatures to increase. Unfortunately, the damage was too serious for him to re-join tomorrow.

“That was definitely not how we wanted our final rally of the season to go,” commented the Dutchman. “We got off to a cautious start in the opening stage with grip levels higher than expected. We increased the pace in the second stage and had a better feeling. We knew we wouldn’t be at the same level as the front-runners because our pace notes were completely new, but were hoping to show steady improvement. The final stage of the morning started well but towards the end we had to stop because of a leak into the water system. We tried to keep going but it wasn’t possible. Unfortunately, the damage is too great for us to carry on tomorrow. It’s a disappointing end to the season but I have learned a huge amount in our WRC programme with Hyundai Motorsport and this will provide a very strong platform for the future. Thanks to the team, on behalf of Seb and myself, for the opportunity.”

We regroup for tomorrow and will not give up on our push for second place in the Manufacturers’ Championship. With nine special stages tomorrow and a further four on Sunday, anything is still possible.

“It’s not been a smooth start for the team,” agreed Team Principal Michel Nandan, “but we’re still putting up a fight. Dani and Hayden had mixed fortunes today but battled to finish the day in fifth and seventh. Unfortunately, Thierry and Kevin had issues on the same stage this morning. Thierry had a wheel come loose ten kilometres into SS3, which we have since identified is the result of broken wheel studs. Kevin had a leak into the water system, which meant he had to stop his car just two kilometres from the end. Thierry, thankfully, will be able to start under Rally 2 tomorrow but the damage to Kevin’s car was too much. He has to retire from the event, a real shame for him. It’s been a hard day and we know tomorrow will be equally demanding on these fantastic but tricky Welsh stages. We still have some work to do to catch up to Citroën, but that’s our target. We’re not going to give up.”