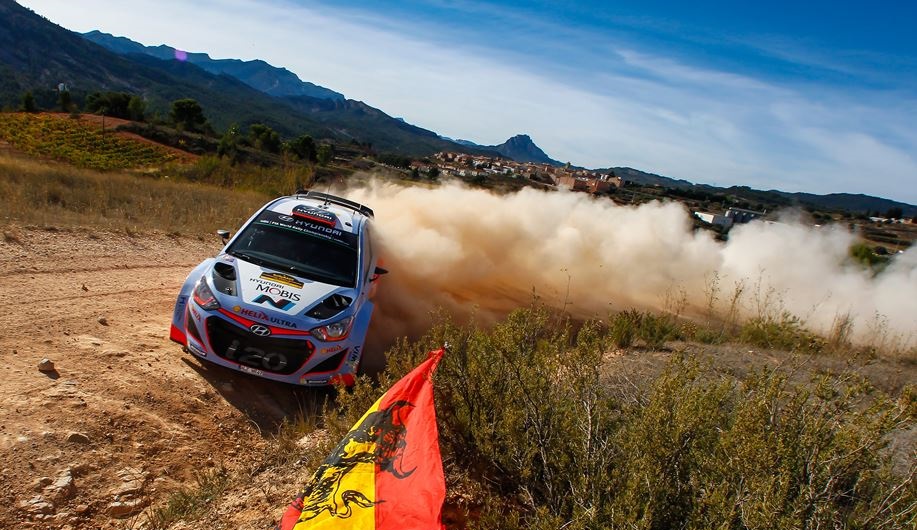 October 23, 2015  Our team has enjoyed an encouraging start to Rally de España, the penultimate round of the 2015 WRC season. All three drivers have set top-three stage times at some point in today’s action.

The Spanish rally is the only event to include both gravel and tarmac stages. Today featured two passes of the mixed-surface Terra Alta stage, the rally’s longest at over 35km.

Dani received incredible support from local fans and finished the first day of his home rally in fourth position.

“It’s always a pleasure to drive in front of my home supporters,” said the Spaniard. “They deliver a great atmosphere on the stages. We had a good day and are definitely in the fight. The morning loop went well, though the Terra Alta stage was difficult with stones on the surface that lost us a lot of time in the middle. The second pass was not completely satisfying but the important thing is we are on pace, and look forward to fighting more tomorrow.”

Hayden had a competitive start with a joint stage win in SS2 and multiple top-five stage times. He sits in seventh at the end of the day, just 0.9s outside the top-six overall.

“It has not been bad today, considering how tricky road conditions have been,” said the Kiwi. “The morning loop went well. The set-up from Australia didn’t really work but our speed was still satisfying. We would have liked to be faster, particularly in the long stage. We tried to make improvements for the afternoon but the car didn’t feel quite right. It was all about managing our tyres this afternoon, and the second run through Terra Alta was crucial.”

Thierry developed his momentum throughout the day. He took third place in SS7 but lost time in stages five and nine. He ended the day comfortably inside the top-nine.

“Overall it’s been a decent day,” admitted the Belgian. “We had a good start but in the Terra Alta run stalled twice and lost around ten seconds. With no lunchtime service, it was good to start the afternoon in a more competitive manner with a top-three time in SS7. The repeat of Terra Alta was tough and we had a front right puncture. I think we can be satisfied  we built confidence through the day and tomorrow will look to fight back up the classification.”

It has been a solid first day with all three cars finishing inside the top-nine with two more days of rallying to go. Our mechanics have 75 minutes in this evening’s service to swap the cars from gravel to tarmac specification for the remaining 14 stages.

“This is a long and complex rally,” commented Team Principal Michel Nandan. “So we have to be satisfied with a trouble-free opening. We have had primarily gravel stages today but the big challenges have been both runs of the mixed surface Terra Alta, which has dictated classification at the end of this day. We are pleased to see all cars running strong, with top-three pace in most stages. Dani has kept the Spanish fans entertained with fourth position, while Hayden and Thierry have plenty to fight for in the top-nine. We now move to full asphalt spec, with a lot of tough stages still to complete. We still have eyes on second in the Championship, so we’ll remain focused on the job in hand.”