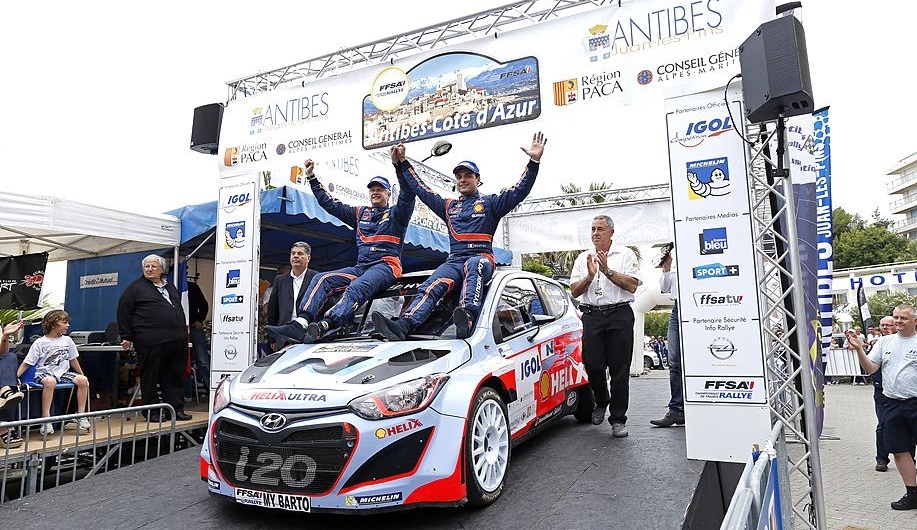 May 31, 2014  French duo Bryan Bouffier and co-driver Xavier Panseri drove their Hyundai i20 WRC to victory at Rallye Antibes  Côte d’Azur today, claiming the maiden win for the young Hyundai Motorsport team in a competition. The wet weather conditions in the afternoon loop  together with a good tyre choice  allowed Bouffier to set some good times and win the event.

The Alzenau-based team entered Rallye Antibes  Côte d’Azur with one Hyundai i20 WRC driven by recently signed development driver Bouffier with the joint aims of accumulating mileage on tarmac in a competitive environment and testing components for the upcoming asphalt rallies of the FIA World Rally Championship calendar. The team’s efforts over the weekend were focused mainly on assessing the brakes, transmission and engine maps of the Hyundai i20 WRC on tarmac.

With Bouffier charged with providing feedback on the behaviour of the Hyundai i20 WRC on the French tarmac stages, the team carried out a positive two-day test session and will now work on the information collected over the weekend to prepare the car for the three asphalt rounds of the WRC.

In order to conduct a full and meaningful test, the team tried to recreate the same conditions encountered in the Championship by using Michelin WRC tyre compounds and Carless WRC fuel, both of which differ from those used in the French Rally Championship by the other competitors entered in Rallye Antibes.

Based in the French Riviera, Rallye Antibes’s itinerary featured 12 special stages  6 repeated – totalling 212,58 Km of special stages run over two days of competition. With the stages run in the Alpes-Maritimes region, competitors tackled some iconic roads like the Col de Blaine, Col de Braus and Col de Turini, including some sections of the legendary Rallye Monte-Carlo.

Bryan Bouffier commented: “I’m really happy to win Rallye Antibes. W e did a good job this weekend and focussed on Hyundai Motorsports’ key objective for coming to the event, giving the team a lot of feedback and information to develop the Hyundai i20 WRC on tarmac. Rallye Antibes was the perfect event for us to test as it’s a mix of fast and flowing and more technical roads. We were not looking for a result this weekend but we always tried to keep a good rhythm in the stages and today we had a really good feeling with the car which allowed us to push a bit more and finally claim the victory. It was nice to be back in the Hyundai i20 WRC after a few months and I could feel a big difference since I last drove it at the end of November last year. The team has done a very good job and I look forward to getting more time in the car and helping them for the future.”

Hyundai Motorsport Team Principal Michel Nandan commented: “It was a positive weekend overall. We did some good mileage with the Hyundai i20 WRC on tarmac and accumulated some valuable experience for the test team by working in rally conditions. We came here with an aim and I can say we can be satisfied as we reached our goal. We tried some different solutions and tested some parts which we needed to assess before the first tarmac round of the WRC season at Rally Germany in August. We worked mainly on the brakes, transmission and engine maps this weekend and collected a lot of information. It was really useful for us to do this work ahead of the pre-event tests of Germany and France. We were not looking too much at the results but it was still a competition and Bryan kept a good pace over the weekend, setting some promising times. For sure the weather helped us together with good tyre choices which allowed Bryan to get first place. It’s nice to win our first event, even if it wasn’t our priority  it’s a good reward for the team’s hard work.”