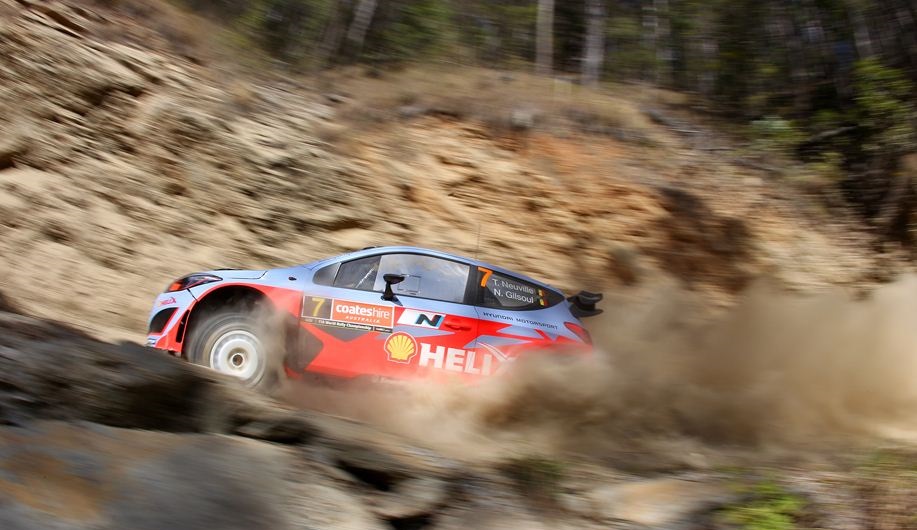 September 12, 2014  The Hyundai Shell World Rally Team has ended the opening day of Rally Australia with all three Hyundai i20 WRC cars still in the mix after eight special stages, including two runs of the Hyundai Super Special Stage this evening.

The team is once again fielding three cars with local star Chris Atkinson (#8 Hyundai i20 WRC) and Kiwi Hayden Paddon (#20 Hyundai i20 WRC) joining lead driver Thierry Neuville (#7 Hyundai i20 WRC), for the tenth round of this year’s FIA World Rally Championship (WRC).

Paddon was the highest placed Hyundai Shell WRT driver after the opening day as the New Zealander had a trouble-free start to his fourth rally with the team. Alongside his co-driver John Kennard, Paddon navigated his i20 WRC to sixth overall after today’s 96km of stages.

Paddon said: “We’ve had a pretty decent day. The car has been faultless in all stages and, although we’ve had a few distractions at times, we’ve been in good shape. It’s been my first time on these stages today so there has been a lot to learn. This morning, the conditions were a bit softer and sandier than expected but we eased ourselves into the rally. We tried to gain more confidence on the afternoon loop but we’ll be able to up the pace tomorrow on stages that I am familiar with. It’s great to have so much support from the Kiwi fans here, I hope to give them something to cheer about.”

Neuville has entered this weekend’s rally with reset expectations after the triumph in Germany, aiming to resume the team’s learning curve in its first visit to Australia. The Belgian and his co-driver Nicolas Gilsoul have set some competitive times today, including the second fastest time in SS2 (Bellingen I 10.72km). However, he made contact with a rock in the repeated Bellingen stage this afternoon, which damaged the suspension of his Hyundai i20 WRC. The crew was able to fix the damage but the incident lost them almost two minutes of time. Nonetheless, they still finished inside the top ten with two tough days still to come.

Neuville said: “We had a difficult first stage this morning. I landed on the nose of the car and after that I got distracted checking the water temperature and went straight at a junction; I lost a few seconds as a result of that. I was quite angry with myself because we then got into a really good rhythm and we could set some quick stage times. We were definitely on the pace of the front runners, which was encouraging for the afternoon. Unfortunately, in SS5, I went wide in a mid-speed corner and we must have hit a rock or a stone because we damaged the rear suspension. It was a shame because it was only a small impact but it is part of our learning curve. We fixed the damage in five minutes and we were immediately back on the pace in the next stage. We have to keep our motivation up because the potential is there and we have a long way still to go in this rally.”

Home hero Chris Atkinson (co-driver Stéphane Prévot) is taking part in his second rally with the Hyundai Shell World Rally Team following his participation in Mexico earlier in the season. The opening day of his home event was hampered in the afternoon when his sump guard came loose, requiring him to adopt a cautious approach through the gravel stages. He ended the opening day in 11th overall.

Atkinson said: “We’ve had a bit of a difficult first day but it’s great to be taking part in my home rally with the team. The first stage went well and I was up there with the regulars but I lost time in the second stage and struggled with a lack of confidence in the third, which is crucial on these stages. I was reasonably happy with the balance of the car but I took the sensible approach to make sure we got to the end. In the afternoon loop, my sump guard came loose on the first stage (SS4 Hydes Creek II 10.73km) and we lost a bit of time. We tried to fix it in between the stages but there was a risk of not getting it back on so we just strapped it up. It was a strange feeling and difficult to keep the car on the road. We’ll see what tomorrow brings and keep an eye on the weather.”

For Hyundai Shell WRT, this is the first trip to Rally Australia, so there is plenty for the young team to learn. A recent test on gravel in France helped to replicate some of the conditions faced in Australia but there is no substitute for the real thing, so today has been a valuable exercise in honing the performance of the Hyundai i20 WRC in the squad’s tenth WRC event.

Team Principal Michel Nandan said: “We knew this rally would be tough because we have not been to Australia with the Hyundai i20 WRC before. We carried out a test in Vosges recently to find a base set-up for the car but it’s only when we are competing that we can see what areas we need to improve. All three cars have made it to the end of the first day, which is always our top priority. Unfortunately, Thierry and Chris have had a few issues today which have slowed them down and hampered progress. Hayden has had a solid day with no problems and we must now plan for tomorrow’s stages, which include two passes of the nearly 50km Nambucca stage  which will be a big test for car and driver.”