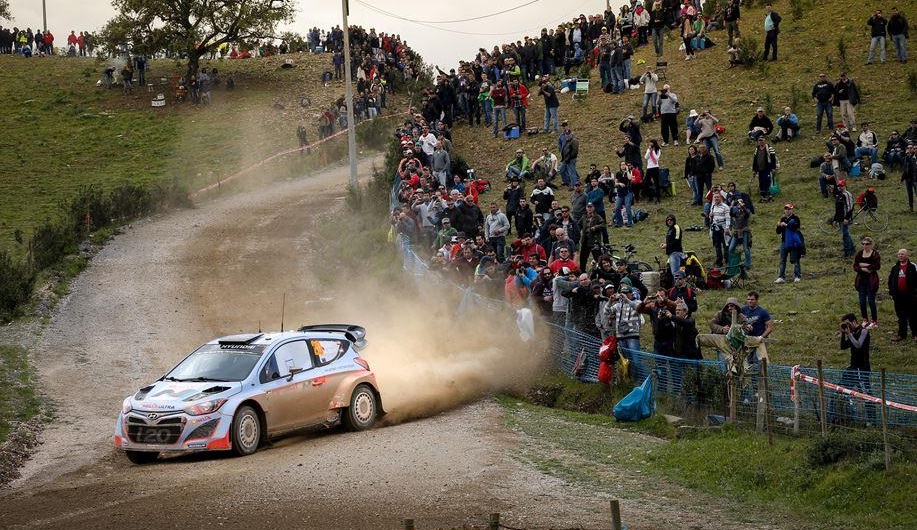 All three Hyundai i20 WRCs have made it to the end of Saturday in the top nine of the overall classification with Dani Sordo heading the Hyundai Shell WRT charge in an encouraging fourth place.

April 5, 2014  The Hyundai Shell World Rally Team has ended the penultimate day of action at Rally de Portugal with all three cars still running in the top nine of the overall classification after a day of mixed fortunes for the team in its fourth WRC event.

Dani Sordo (#20 Hyundai i20 WRC, co-driver Marc Martí) has ended the day as the leading Hyundai driver in a highly commendable fourth place and heads into the final day just 20 seconds off a podium position.

The team is focusing on the reliability of its three cars in this rally in order to continue accumulating data and experience but Sordo’s performances have been positive. Starting the day in fifth overall, the Spaniard maintained his rhythm from Friday in difficult conditions and enjoyed a trouble-free day.

Sordo said: “It has been a very positive day for us and very satisfying to end it in the top four overall. The Hyundai i20 WRC continues to perform very well in these difficult conditions and we have been able to make improvements and progress all the time. It has been a challenge to get the tyre choice right but we have settled into a good tempo and built up our confidence. We are 20 seconds from the podium but our aim is to complete tomorrow’s three stages in the best way possible and to make sure we reach the finish of this rally. I have had some tremendous support from local fans and supporters here which has made the event even more special. “

Thierry Neuville and Nicolas Gilsoul (#7 Hyundai i20 WRC) started the day in high spirits, continuing from where they left off on Friday to move into the top five overall by lunchtime. The Belgian duo cemented their improved pace in SS11 (Santa Clara 2, 19.09km) claiming the third best time in stage but they ran into trouble through the rest of the loop (SS12 Santana da Serra 2, 31.90km and SS13 Malhão 2, 22.15km). Neuville unfortunately hit a big root during the long SS12 stage which caused substantial damage to the rear left of the car. Although the car was able to continue, the Belgian had to take extra caution in order to bring the car home. He lost around five minutes in the two stages and now lies ninth on the classification after 13 of 16 stages.

Neuville said: “I was very happy with the morning loop and we built up a good rhythm, continuing from the progress we made on Friday. I didn’t push too hard because I wanted to save some soft tyres for the afternoon and for tomorrow. The stages today were very technical and hard on the car but we were competitive with the Hyundai i20 WRC. In the afternoon loop, the car was good and we made a good tyre choice that allowed me to push. Unfortunately, during the long SS12 stage, I slightly clipped a big root on the roadside but it was enough to damage the suspension. We had to complete the rest of the day like that and lost a lot of time and a few positions. It’s a real shame but we will do our best tomorrow.”

Juho Hänninen (#8 Hyundai i20 WRC, co-driver Tomi Tuominen) improved three places compared to yesterday but still suffered some problems during the day. He was caught out by a couple of punctures in both the morning and afternoon loop and also experienced a transmission problem in the final stage which lost him valuable time. Still, the flying Finns are in eighth place and have helped the team to achieve a great deal so far in this tricky rally.

Hänninen said: “It’s been a day of two halves for us today. We had a reasonably good morning and I was very pleased with the pace and rhythm, particularly in the long middle stage. I felt more confident in the conditions and was driving better than yesterday. We had a pu ncture in the final stage of the morning loop but we were pretty happy with our position. In the afternoon loop, we started well but finished with more trouble as we developed a transmission problem so had to slow down a lot. It was a disappointing end to the day. We knew this would be a tough rally but I would have preferred it to be more trouble -free. We will continue to learn more tomorrow and hope to end the rally on a high note.”

Generally, today’s six stages  a repeated loop of three stages totalling 146 kilometres  have been tough on teams and drivers as they have sought to preserve softer compound tyres for tomorrow’s defining three stages. Drivers have had to mix and match their tyres in stages while pushing to maintain the momentum in the muddy and slippery conditions. It has been another useful experience for the Hyundai Shell World Rally Team in its fourth WRC event and one which will only serve to help the team advance its impressive rate of development.

Team Principal Michel Nandan said: “It’s been far from a straight-forward day with some tricky driving conditions, some key strategy decisions and a few incidents that have halted progress. Overall, we have accomplished our objective of getting all three cars to the end of the day, although with Thierry and Juho this was slightly more complicated than with Dani. In fact, Dani has had a strong and trouble-free day with the performance of his Hyundai i20 WRC being very pleasing to see. Thierry, too, started the day with a good rhythm and was in the top five when he had to nurse the car home as he picked a problem on the penultimate stage. Juho has shown some improved performance today but two punctures earlier in the day and a transmission problem in the final stage have undone his hard work. We have to take the positives that all three cars are still running and we have managed to overcome the difficulties when they occurred. This is what makes rallying so challenging and ultimately rewarding. We are learning all the time and we look forward to the final three stages on Sunday.”

Three stages will make up tomorrow’s final day of Rally de Portugal with SS14, the 13.83km Loulé stage being repeated as a Power Stage for SS16 and SS15, the 16.21km S. Brás de Alportel stage in between.