Day 2: Dani/Carlos move up to second in Germany 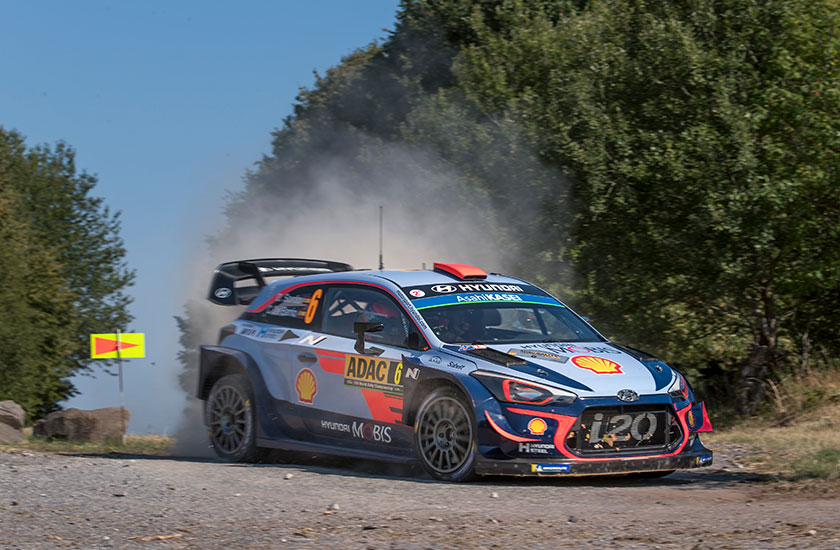 Day 2: Dani/Carlos move up to second in Germany

Saturday’s itinerary at Rallye Deutschland required military precision and focus, with the unforgiving Panzerplatte  the longest stage of the event  offering a relentless test for crews.

For our Spaniards Dani and Carlos, it was certainly a positive day with three stage wins allowing them to move into second place overall.

Our #6 crew will begin the final day of our home rally just 0.8-seconds ahead of a hard-charging Jari-Matti Latvala, with our very own Thierry and Nicolas not far behind in fourth. It promises to be a thrilling finale!

“It’s encouraging to be involved in such an exciting fight for the podium,” said Dani. “I felt really comfortable and competitive in the Panzerplatte stages, getting absolutely everything out of the car.”

“Dani and Carlos have been one of the standout crews,” said our Team Principal Michel. “They have had a few difficult stages as well, but have put themselves in strong contention for their third podium of the season.”

We contested a quartet of stages on Saturday with Arena Panzerplatte (9.43km) preceding the 38.57km Panzerplatte test. The 14.78km Freisen and 12.28km Römerstrasse stages completed the loop, which was repeated following lunchtime service.

Our Belgian crew was able to stay in podium contention but it was not an easy day for the championship leaders.

“We have struggled with the handling of the car, and have had to be careful not to push too much because we know how easy it is to make a mistake,” admitted Thierry. “We have to be satisfied, even if we’re not completely happy.”

Andreas and Anders also moved up the standings to sixth place but have Sébastien Ogier just 0.5-seconds behind. “Another challenging day,” summarised Andreas. “The time sheets don’t make for good reading but we are taking steps and that is the most important thing.”

Our home rally concludes with two runs through the gruelling 29.07km Grafschaft stage on Sunday. The 14.97km Bosenberg test will act as the rally concluding Power Stage.

“Our i20 Coupe WRC has potential on these tricky tarmac stages but there is still performance to be found,” concluded Michel. “We will continue to push as we face an exciting conclusion to our home rally.”