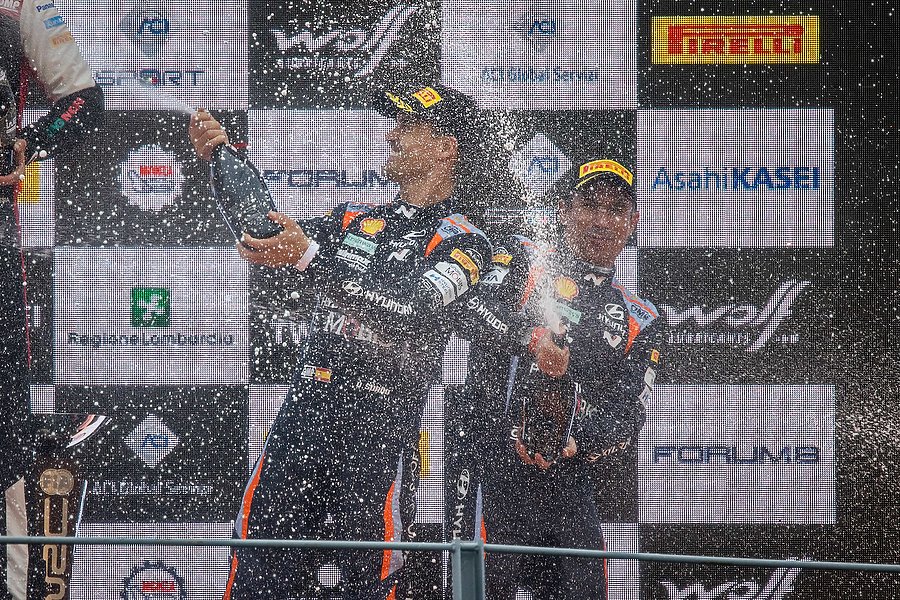 The final round of the 2021 WRC season has resulted in another podium result for our team, as Dani and Cándido completed Rally Monza in third place overall.

The result represents their second podium in a row, having finished third at the previous event in Spain, and our 17th individual top-three result of the season. Third place was a fitting finish for our i20 Coupe WRC in its final event, ahead of the all-new hybrid powered Rally1 regulations, which will come into effect from next season.

“I am honestly really happy to have secured a podium finish, and to end this era of WRC cars with a top-three finish,” said Dani. “I’d like to say thanks to the team for another year working together, with some good highlights. I hope next season with the new hybrid regulations will be even more fun.”

Thierry and Martijn pushed hard right to the end of the rally to claim their own podium result. Sadly, an incident on Saturday morning put them too far out of contention.

Our Belgians had taken a stage win on the opening San Fermo test but lost the rear of their car just two corners into the subsequent Selvino stage. The time loss dropped them down to fourth place, where they would ultimately finish, despite taking a clean sweep of stage wins on Sunday.

“My focus today has been on enjoying these final stages of the season and the last runs in this era of the WRC,” said Thierry. “We have had some incredible years with this car. I am now looking ahead to the new adventure in 2022 and adding more memorable moments together with the team.”

In their first WRC event with our team, Teemu and Mikko made steady improvements to claim a top-six finish. “It’s tricky to jump into a brand-new car for this rally,” said Teemu. “I am grateful to the team for giving me the opportunity and the time to get up to speed. We’ve been able to improve our pace step-by-step.”

Our Team Principal Andrea reflected on the rally, and the season. “As an event, it has been special to see so many spectators on the stages and in the service park,” he said. “Sadly, this has been a championship in which we should have done better, but we can only learn the lessons from our mistakes and improve for next season.”

2021 FIA World Rally Championship for Manufacturers’ Standings
After round 12

2021 FIA World Rally Championship for Drivers’ Standings
After round 12