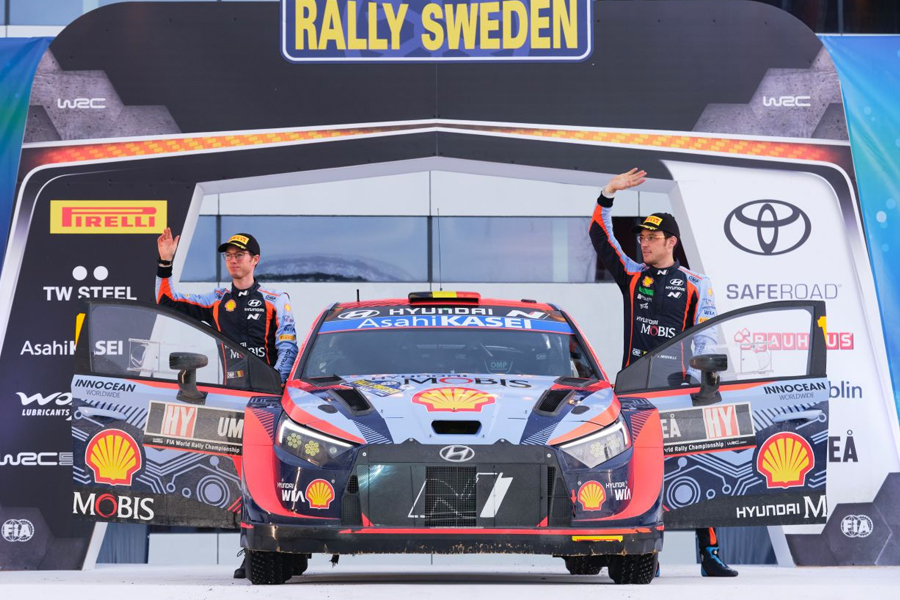 The high-speed snow-lined roads of Rally Sweden gave us our first podium of the new WRC hybrid era as Thierry and Martijn claimed a competitive second place.

The 17-stage rally, the first WRC event in Sweden for two years, was held in near perfect winter conditions with plenty of snow and ice-packed routes to challenge our crews. We were determined to bounce back after a challenging opening rally in Monte-Carlo – and the podium was the perfect way to do that.

“It’s a great feeling to take a podium here in Sweden, our first in the new hybrid era,” said Thierry. “It’s a bit unexpected after what we saw in Rallye Monte-Carlo, but the team has done a good job. My thanks go to everyone at the factory in Germany for pushing hard.”

From the very start of the event on Friday’s stages north of the Umeå Service Park we were on the pace with our i20 N Rally1 cars. Ott and Martin took the opening stage win and quickly put themselves in contention. Our Estonians added another fastest time during the afternoon loop to move within 1.1-seconds of the lead but an issue with the hybrid system forced them to retire.

They re-joined the rally on Saturday morning and went onto salvage five points with an epic drive through the Power Stage. “There are not really many positives for us to take away,” said Ott. “Overall, it has been a frustrating and disappointing weekend. On the plus side, we showed that we had the pace to be competitive.”

Smiles back on the faces

Our youngest crew Oliver and Elliott also demonstrated impressive pace in Sweden, featuring as high as second overall on the opening day. They were looking set for a top-five result until a throttle issue on Saturday afternoon cost them two positions. Despite the setback, they kept their composure and eventually finished their second WRC event with our team in sixth.

“I have enjoyed this weekend very much,” said Oliver. “It has been great to be competing at home in a WRC car for the first time, you really can’t get better than that. The car has been working well all weekend and the team has done an amazing job, so thanks to them.”

There were smiles back on the faces of our team with this result, which included six stage wins and a 1-3 in the Sarsjöliden Power Stage. Our Deputy Team Director Julien summed up the mood: “This second place really feels like a victory for us,” he said. “We know there is still work to be done, and improvements we need to make on the car, but we have shown we’re getting there. This is an important result, but we hope it’s just the start of our return to the top.”

The 2022 WRC season will return to tarmac for the next round, Croatia Rally, taking place from April 21-24.

2022 FIA World Rally Championship for Manufacturers’ Standings
After round 2

2022 FIA World Rally Championship for Drivers’ Standings
After round 2