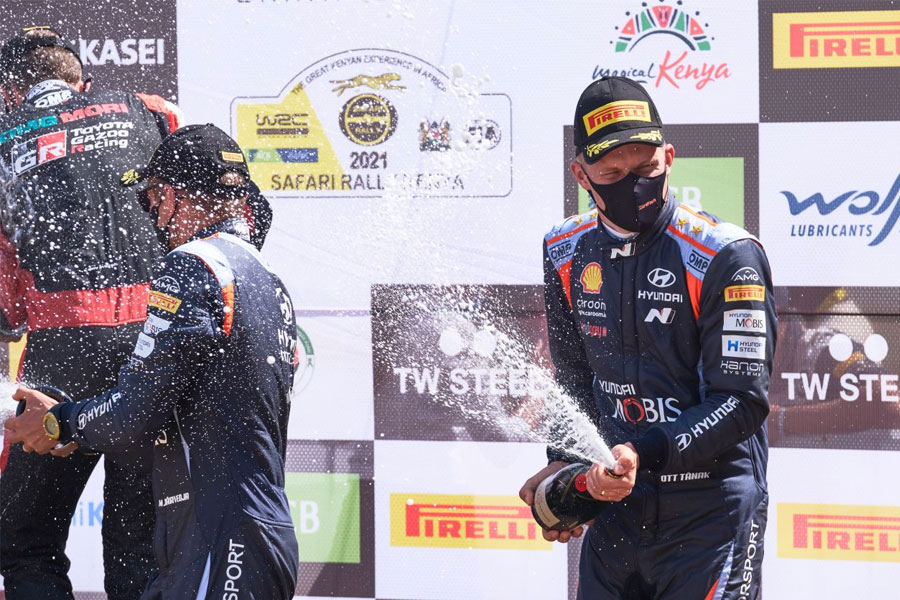 A third-placed finish for our Estonian crew Ott and Martin provided little consolation for our team in Safari Rally Kenya, after Thierry and Martijn retired from the lead on the final day.

Thierry, in only his sixth WRC event with new co-driver Martijn, had been on impressive pace throughout the weekend. They scored three stage wins on Friday in incredibly rough conditions, where survival was the primary objective on roads layered with sandy-dusty fesh-fesh.

Our Belgians added another stage win on Saturday’s opening test, while also expertly avoiding zebras and giraffes during the morning loop. Isolated rain showers turned the final stage into a lottery, but they ended the day with a lead of almost one minute.

Having controlled the rally, it was a devastating start to Sunday morning as the pair picked up a broken rear-right damper in the 11.33km Loldia stage. Despite getting the car to the finish – and retaining the rally lead – the damage was too great for the crew to continue.

“This is a big disappointment, not just for me but also for the whole team,” said Thierry. “I felt comfortable in the car, we were fast and controlling the speed throughout the event, so there are lots of positives to take away. The motivation is still there, but we will regroup, find solutions and come back stronger as a team.”

Ott and Martin completed the rally in style with a committed performance in the Power Stage, scoring five extra points to add to their podium. “On the one hand, it is good to be back on the podium and to take maximum Power Stage points, but this has been another difficult weekend for the team,” said Ott. “It is a shame for Thierry that it didn’t work out for him. It has been an impressive event, and enjoyable to do something different and unique.”

Dani and Borja retired on Friday after hitting a rock in the SS3 Kedong test. Their focus for the rest of the rally was to make it through safely and try to pick up points. “It has not really been a good weekend for us. We had our problem on the first day, and we lost all of our possibilities to fight for a strong result then,” said Dani. “We will work through this situation together and come back stronger.”

Our Team Principal Andrea Adamo offered his usual honest assessment of the rally: “We cannot be happy,” he said. “This is the third rally in a row in which we have had problems, so it cannot be considered bad luck. There are no excuses, it simply should not happen. We have to understand what is going on.”

As the WRC season reaches its halfway point, we are second in the manufacturers’ championship, 59 points from the leaders, with Estonia – Ott and Martin’s home event and where we finished 1-2 last year – taking place July 15-18.

2021 FIA World Rally Championship for Manufacturers’ Standings
After round 6

2021 FIA World Rally Championship for Drivers’ Standings
After round 6