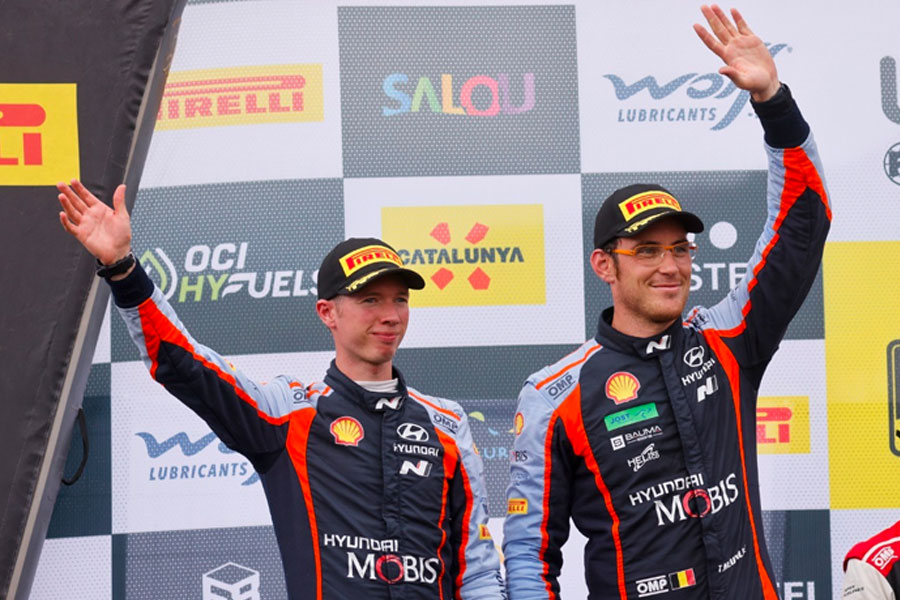 The penultimate round of the 2022 WRC season saw us score another podium result as Thierry and Martijn finished Rally de España in second position.

Our Belgians took an early lead on Friday but had to settle for the runner-up spot after a missing some performance from their i20 N Rally1 compared to the front-running crew.

“Second place is a good result for us this weekend,” said Thierry. “We missed a bit of performance in the early phase of the rally, in the tricky conditions on Friday. Unfortunately, we lost any chance to fight for victory there at the beginning. I am happy for the team that we have added another podium result.”

Fourth of the year

The result marked Thierry and Martijn’s fourth podium of the season after Sweden (second), Croatia (third), and Greece (first). It also represented our 14th top-three finish of the year.

Ott and Martin struggled to find the right feeling with the car all weekend but were still able to complete the rally in fourth place. “Performance-wise, we’ve been lacking a bit and I’ve not really been able to find the balance in the car or get it to work for myself,” said Ott. “Still, we finished the rally in one piece and got some points and collected plenty of useful data.”

Dani and Cándido found a breakthrough on Saturday’s itinerary on their way to fifth place. Our Spaniards took an impressive stage win on the day’s longest stage, El Montmell, and went onto add another fastest time on Sunday morning.

Lighting up the dark

The final day of the tarmac rally got underway in early morning darkness with the Pratdip stage offering a unique wake-up call. Our crew was fully alert for the challenge, lighting up the timesheets to lead a team 1-2.

“I have given it everything,” said Dani. “Thanks to the team for giving me the opportunity to compete again in my home rally and giving me a car like this. It has been incredible to see so many fans here and to feel all their support.”

Although we weren’t able to take victory, our Deputy Team Director Julien offered a balanced perspective. “Not a bad final result if you look at the second position from Thierry and having all three cars finish in the top five,” he said. “There’s a bit of disappointment; despite some stage wins, we couldn’t really fight for the win and the manufacturers’ championship is now over. Still, I would like to thank again the whole team for the incredible job that has been done over the last months. Now we need to look forward to Japan where we can still target an excellent result and dream even bigger for the future.”

2022 FIA World Rally Championship for Manufacturers’ Standings
After round 12

2022 FIA World Rally Championship for Drivers’ Standings
After round 12