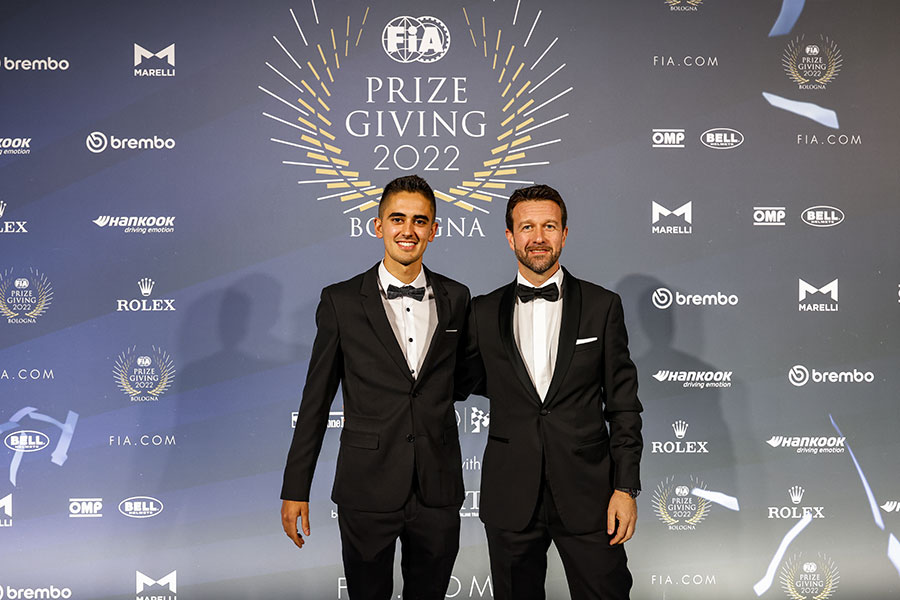 Our Customer Racing driver Mikel has been formally presented with the 2022 WTCR – FIA World Touring Car Cup for Drivers at the prestigious FIA Prize-giving in Bologna.

The presentation marked the conclusion of a year’s worth of hard work by Mikel and all involved in the title winning BRC Hyundai N Squadra Corse. Team Principal Gabriele Rizzo also collected the WTCR Teams’ trophy on behalf of BRC Racing Team, who clinched the title for the first time.

The ceremonies, spread over two days in the city, saw champions from every major branch of international motorsport series assemble to receive their official awards.

Ahead of the Prize-Giving, both Mikel and our Deputy Team Director Julien summarised their feelings on the end of the season.

How does it feel to be the winner of the FIA WTCR drivers’ title and have your hands on the trophy?
Mikel: “It feels incredible. As a driver you always dream of winning a world title and it is something I have thought about since I was a young boy. It’s a great feeling that this goal has been achieved and I feel so lucky to be able to say that I am a world title winner. I’m very proud of all the team, especially as we won the teams’ title as well. BRC Racing Team, my team-mate Norbert Michelisz, Nicky Catsburg and the support of Hyundai Motorsport Customer Racing. None of this would be possible without them, they have done a fantastic job all season and it is really nice to celebrate these wins with them.”

This was your first year as a Hyundai Motorsport Customer Racing driver and with the Elantra N TCR, how was it?
MA: “When I had the opportunity to join Hyundai Motorsport, it was a very easy decision, as I knew I wanted to win world titles and I knew that Hyundai had a competitive car. I’m very happy that I made that choice, as we have had an amazing first season together. I have loved driving the Hyundai Elantra N TCR all year, I felt comfortable with it from the first moments I tested with the team, and I think it suited me well.”

It must be a big achievement for Hyundai Motorsport Customer Racing to have built the winning car for both the drivers’ and teams’ titles in FIA WTCR?
Julien: “2022 was a fantastic season in WTCR for our Customer Racing department and for BRC Racing Team. It was a pleasure to see the Elantra N TCR performing at the top and being able to bring these two titles home. It is clear evidence about the quality of the entire package we can offer, with competitive cars that can perform at every type of circuit around the world. I am very proud of what we have achieved in FIA WTCR, winning five titles in five years.”

The WTCR programme was scaled back this year, did that change the approach at all?
JM: “We did scale back the number of cars in WTCR this year, but we never saw that as a hindrance. Looking back, we can see that the season has been well managed from the first weekend in Pau, to the final one in Jeddah. While others did come with more cars, we were able to work in a clever way and make the best out of having two cars, three by the end of the season. Having Gabriele Tarquini as Team Manager was also a big help, as a driver at heart he was able to give a different perspective on the pit wall in terms of strategy.”