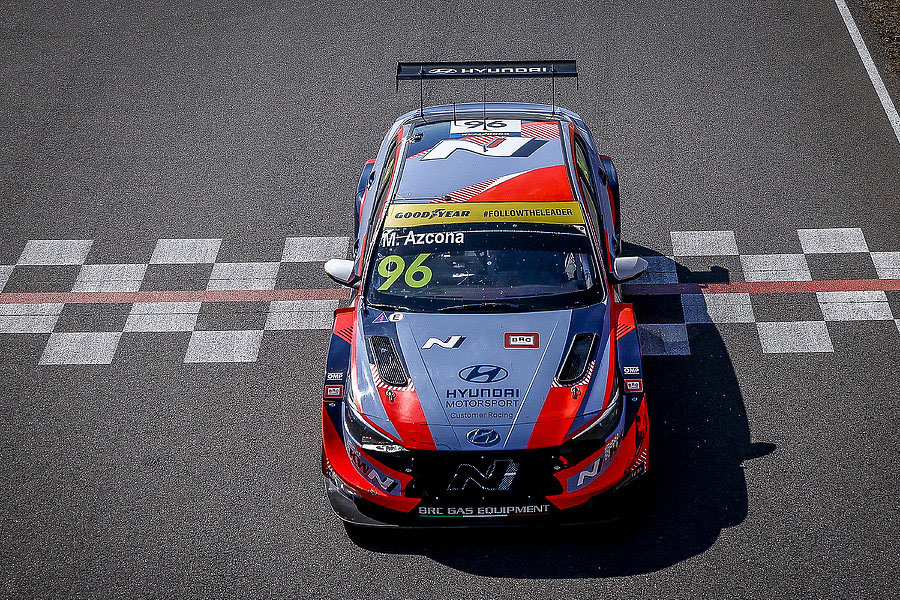 Our Elantra N TCR customer team enjoyed another positive weekend at Anneau du Rhin, the seventh round of the 2022 WTCR season.

Two third place finishes for Mikel cemented his place at the top of the drivers’ standings, while BRC Hyundai N Squadra Corse now hold a 57-point advantage over its closest competitor.

Hard battles
A thrilling Race 1 saw Mikel and Norbert applying pressure to their competitors. Mikel was initially running in a podium position but dropped a place and immediately fought to regain it. He was unable to make the move stick and crossed the line in fourth.

“It was very tough race,” explained Mikel. “I was pushing to the limit, but I feel very confident in the Elantra N TCR.”

His team-mate Norbert stormed through the field and made up three places from his starting position to finish fifth. However, a post-race penalty was applied to another competitor which moved Mikel into third and Norbert into fourth.

“The start of Race 1 was very busy, and I managed to gain some positions,” said Norbert. “I’m happy with where we finished, and it was some good points for the teams’ standings.”

Storming through the field
Mikel started Race 2 in eighth position, but after some impressive overtakes he was sitting in fourth. The Spaniard passed his team-mate Norbert, who was running in third, to take his ninth podium of the season.

“I’m very happy with another podium,” said an elated Mikel. “This is great for the team, they have worked so hard.”

After a good start to Race 2, Norbert remained in third position for the majority, before seeing his team-mate close up behind him. After letting Mikel past, he crossed the line in fourth position.

“I really tried my best to gain some positions and go for the win,” stated Norbert. “The others were faster to stay ahead, but fourth is a good result for me personally.”

2022 FIA World Touring Car Cup for Teams
After Round 7

2022 FIA World Touring Car Cup for Drivers
After Round 7