Highs and lows for our Elantra N TCR customers 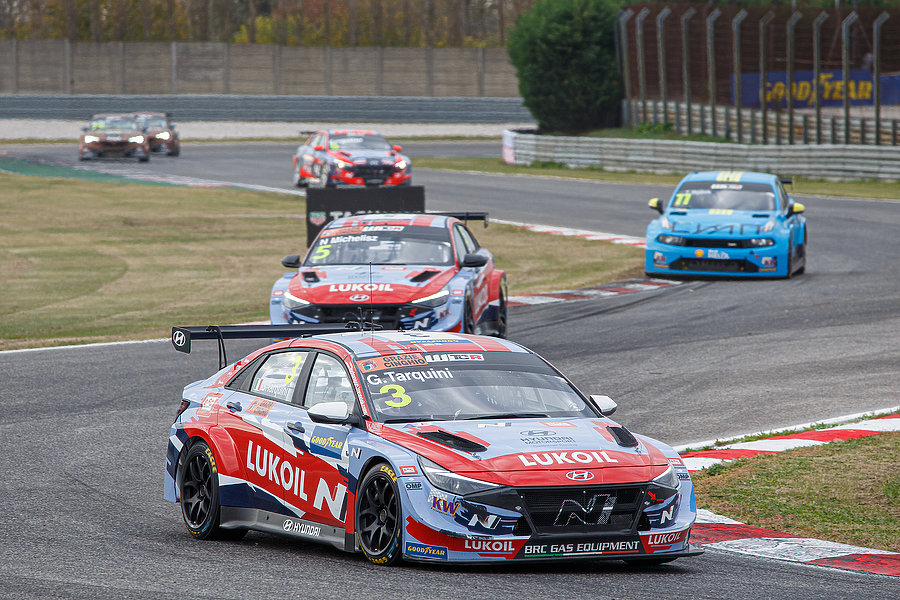 Highs and lows for our Elantra N TCR customers

Itwas a mixed weekend for our Elantra N TCR customers at the penultimate round of the WTCR – FIA World Touring Car Cup season, Race of Italy.

At his home event, Gabriele announced he would retire from full-time racing at the end of the season. His weekend may not have got off to the best start in qualifying, but a superb performance on Sunday in Race 2 saw him storm up the field from 12th to finish in fifth. Combined with a ninth-place finish in Race 1, it was a result the Italian was proud to have achieved.

“I had a very good line at the start of Race 2 and into turn one that allowed me to overtake a lot of people and I managed to avoid the incident ahead of me,” explained Gabriele. “The car was fantastic: I recovered positions, was able to fight with others, and I enjoyed the race. A lot of people have come from all over Italy to say goodbye to me today, and I’m proud I achieved this result for them.”

His BRC Hyundai N LUKOIL Squadra Corse team-mate Norbert made a good start from the second row of the Race 1 grid to maintain fourth place in the run down to the first corner. He battled hard to challenge the cars in front for a podium position, but struggled to progress any further. The Hungarian allowed his team-mate to pass him in Race 2, and he crossed the line in seventh.

“I realised Gabriele behind me was faster so we swapped positions, and that proved to be a good decision,” said Norbert. “My pace was not as fast as his and not good enough to put pressure on the cars in front. In the end, I’ve had worse weekends but things didn’t really click for me, and I would really like to understand why.”

Title hopes punctured
Jean-Karl’s title ambitions took a hit in Italy after an incident on the opening lap of Race 2 practically ended his race. Having been sandwiched between several cars at turn four, the Frenchman picked up a puncture and was forced to pit. Although he was able to re-join the race, he finished in last place. After a penalty in Race 1 dropped him from ninth to 14th, he now turns his focus to finishing second in the driver’s standings.

“It’s not been the weekend we expected here at Race of Italy,” he admitted. “Now we have to focus on finishing on the podium of the championship; we are only 19 points behind second place, so we still have the possibility to finish vice-champion.”

Luca made a stellar start in Race 2 to gain six positions on the opening lap. He later made an emphatic move up to ninth, though he later dropped a position to tenth after a penalty. The German elected to play it safe in Race 1 and crossed the line in 15th.

“The second race went a bit better, we made a few changes to the set-up which helped us to make a positive step forward,” summarised Luca. “It was good to go from 16th to ninth on-track with some strong pace in my Hyundai Elantra N TCR, but it was sad Jean-Karl was effectively out of the race and I am very disappointed for him.”