i20 R5 take titles on tarmac and gravel 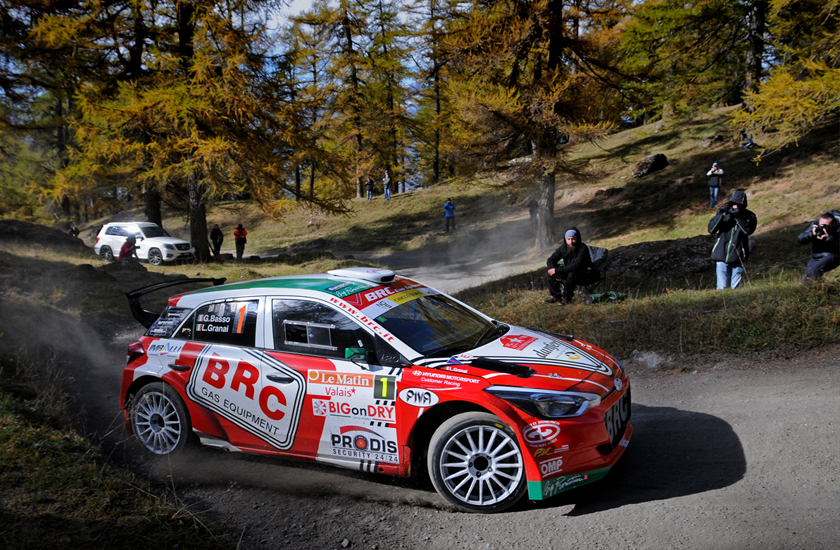 i20 R5 take titles on tarmac and gravel

Hyundai Motorsport’s New Generation i20 R5 customers have added another two titles to their list of honours in recent weeks, with success on both tarmac and gravel. Meanwhile, crews continue to take victories in events across Europe as the 2017 season draws to a close.

Victory at the Rallye International du Valais (October 26-28) gave Italians Giandomenico Basso and Lorenzo Granai a third win of the season in the Tour European Rally (TER) Series this year. The result on the Swiss event was enough to secure the title  the first international rally honour for the New Generation i20 R5  with a round still to spare.

The pair’s weekend was almost derailed by a mistake on only the second stage of the event that dropped to them to foot of the top ten, and threatened to postpone their championship celebrations. However, despite the loss of time they remained ahead of their nearest challengers in the TER Series, and with consistently quick times climbed their way back into the top five before the end of the opening day.

Their strong pace continued on the Saturday, setting the fastest time on two of the day’s five timed runs.  Furthermore, thanks to the reliability of their BRC-run New Generation i20 they were able to take advantage of misfortune for other crews, rising to the overall lead following the longest section of the rally, and maintaining the position over the remaining two stages to take victory by nearly two minutes.

Jordan Berfa is first in France

Last weekend Jordan Berfa’s year-long search for the title in the French gravel championship ended with the 22-year-old claiming his first national honour. Berfa and co-driver Damien Augustin finished fourth overall at the Rallye Terre de Vaucluse (November 11-12), the final round of the championship.

The Turbo ABP Competition run crew entered the event with a comfortable points lead. Simply looking to protect their advantage at the start of the rally the duo took a cautious approach. However, just as they have been all season the pair were both quick and consistent, while the New Generation i20 R5 beneath them once more proved its reliability on the gravel stages. Combined the quality of crew and car put them in fourth at the end of the opening day, trailing a trio of teams in WRC machinery.

Knowing they had to do nothing more than maintain their position to claim the title the pair kept the same strategy through the four stages on the final day of the season. Ending their campaign with the third fastest time on the final test, they finished in the overall position they had held overnight, and won the R5 class for the fourth time this season. With the result they not only protected the gap they held heading into the event, but extended their margin of victory over their nearest competitors in the standings.

Even after delivering the first national title for New Generation i20 R5 customers driver Iván Ares shows no sign of relinquishing his dominance of the Spanish tarmac championship. Running a special golden livery to celebrate their success Ares and co-driver José Pintor won five of the seven stages at the latest round  the Rallye de la Nucia-Mediterráneo (November 3-4)  to take a fifth consecutive victory.

As well as the points on offer for victory, they also claimed the bonus on offer for topping the TC Plus Power Stage. This marked the third time this season that the crew have taken maximum points from an event. In doing so they not only beat not the other R5 teams on the entry list, but also those running nationally homologated N5-specification cars.

Friulmotor podiums in Slovenia and Croatia

The same weekend Juraj ebalj scored his first victory at the wheel of a New Generation i20 R5, running the Rally Pore? (November 3-4) with the support of the Friulmotor Rally Team and Hyundai Croatia. The seven-time national champion dominated the event, leading throughout and only failing to win a single stage over the two days on his way to win overall by more than 90 seconds. ebalj will return to the wheel of the car later this month at the season ending Rally Show Santa Domenica.

Friulmotor patriarch Claudio de Cecco brought his campaign in the Slovenian national championship to a close with a second place finish at the Rally Idrija (October 28-29). The result was the fourth runner-up finish for de Cecco and co-driver Jean Campeis of the season, where they have enjoyed support from Hyundai Slovenia.

Narrowly missing out victory at the tarmac event, despite setting the fastest time on the final stage, the pair also confirmed themselves in second in the championship standings after a very consistent year in the series.

Hyundai Motorsport Customer Racing manager Andrea Adamo said: “First we must pass our congratulations on to the crews and teams for the championship successes in the TER Series, and then last weekend in France. The championship win in France, in the national gravel championship, proves that the New Generation i20 R5 is equally competitive on loose surfaces as well as tarmac where our customers have also won championships. Our customers have enjoyed great success this season in multiple championships, and we will continue to support them over the coming winter months to make sure that they can once again challenge for titles next season.”