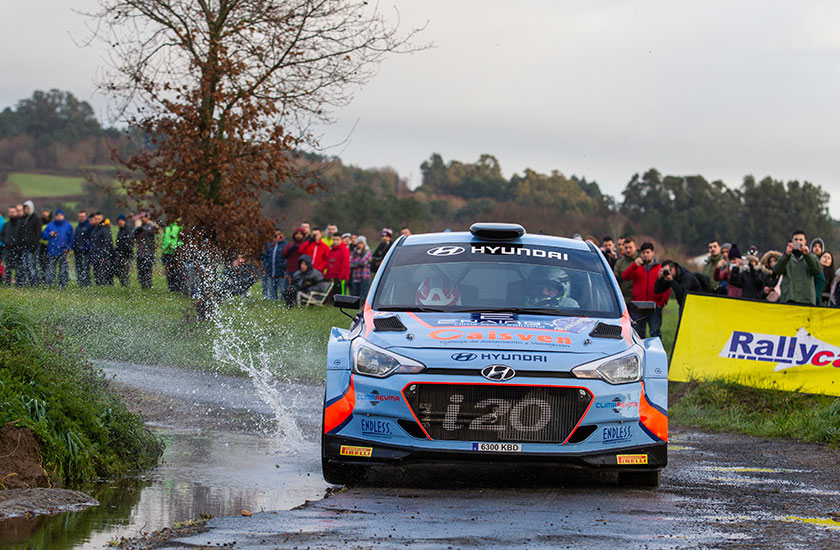 In Spain, reigning champions Iván Ares and José Pintor took maximum points from the Rali do Cocido, the opening round of the Spanish Tarmac Championship.

The pairing wasted no time in establishing themselves at the front of the rally with two fastest times at the start of the rally. Despite dropping momentarily to third overall, they immediately rebounded, regaining one position as they took the three points on offer for the winning the TC Plus power stage. Four more stage wins followed before the close of the rally, sealing a fantastic victory.

The combination of the i20 R5, Hyundai Paraguay and Diego Dominguez continued to be the team to beat in the country. Dominguez and co-driver Edgardo Galindo were on the pace throughout the Rally Trans Itapúa, as they cruised to a third victory of the year.

The result kept them at the head of the Paraguayan championship, but also put them in the lead of the South American FIA CODASUR Championship, which attracts the top crews from across the continent.

Fast on the French tarmac

Bryan Bouffier made an impressive debut in an i20 R5 at Rallye Le Touquet – Pas de Calais, the first round of the French Tarmac Championship.

In a car run by the Onyx Racing by Enjolras team, Bouffier and co-driver Gilbert Dini were the fastest R5 entrants throughout the two-day event. Such was the pace of the car that on two occasions they beat teams in former WRC machinery to claim the fastest stage time overall.

Starting the season with a fresh challenge on tarmac after winning last year’s gravel championship, the Turbo ABP Competition crew of Jordan Berfa and Damien Augustin finished eighth overall. The final i20 R5 car, run by Sarrazin Motorsport for Quentin Giordano, was also a fixture in the top-ten.

Three more i20 R5 customers were in action at the Rebenland Rallye, which brought together the entries for the Austrian championship and the Mitropa Cup.

Hungarian teams LPWM Sport and Korda Racing were represented by driver Lovász Pál and Szabolcs Várkonyi respectively. The two crews were locked in battle for almost the entire event just outside of the top-ten overall.

The i20 R5 customer line-up at the rally was completed by Hans Peter Haid at the wheel of the Gassner Motorsport owned car, making his second start with the team following January’s Jänner Rallye.

Consistent pace in Ireland and Holland

Eugene Donnelly gave the i20 R5 its seasonal debut in Ireland at the opening round of the Irish Tarmac Championship, the West Cork Rally. Donnelly was a constant in the top-ten finishing in ninth overall in another event headed by older spec WRC cars.

Another consistent result for an i20 R5 customer came in the Zuiderzee Rally in Holland. Bob de Jong finished fifth overall to start his campaign in the domestic championship.

“This last weekend was a great one for our customers,” reflected our Customer Racing Deputy General Manager Andrea Adamo. “The best advertisement for the i20 R5 is the results on the stages, so to have victories the events in France, Spain and Paraguay covering tarmac and gravel is a special moment. Of course, while our customers have now made fast starts to their national campaigns it is important that we now work to support them through the rest of the year, so they can end the year as well as they have started.”