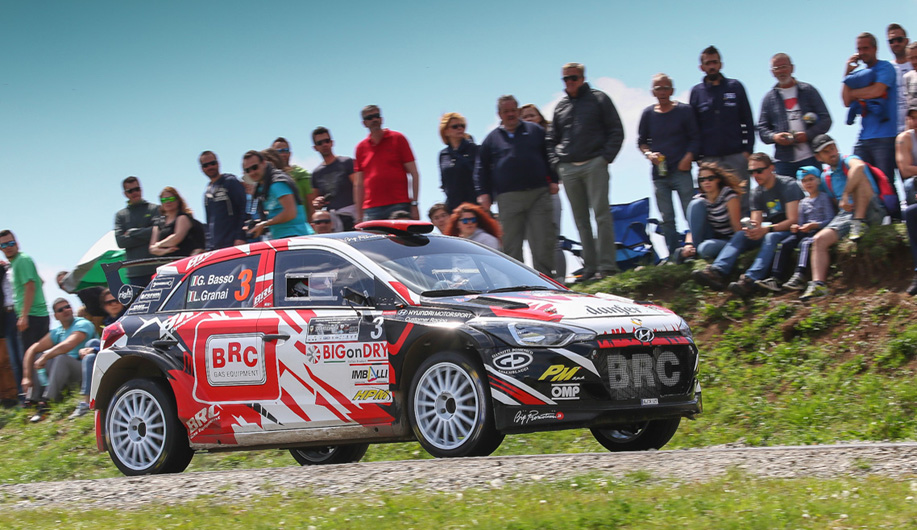 The New Generation i20 R5 took a first international victory in customer hands last weekend, when Giandomenico Basso won the first round of this year’s Tour European Rally (TER) series at the Transilvania Rally in Romania.

The Italian, the reigning national champion in his home country, as well as a former title holder in both the European Rally Championship (ERC) and the Intercontinental Rally Challenge is focusing on the TER Series this year in his first season at the wheel of an i20 R5. In his first event in the car he and co-driver Lorenzo Granai won nine of the rally’s 14 stages to win by over a minute to make a near perfect start to his 2017 season campaign with the BRC team.

Basso’s was not the only New Generation i20 R5 on the stages of the Cluj based event. As part of their campaign in the national championship Romanian pairing Sorin Badea and Botond Csomortáni were also in action in one of the Hyundai Motorsport built cars. The duo finished ninth overall but, more importantly for them, fifth place among the team’s competing for domestic honours.

Starting their own TER Series campaign Hyundai Motorsport Driver Development Program crew Chewon Lim and Martijn Wydaeghe were involved in an accident on the fifth stage of the rally. Though both men were uninjured in the crash, they went to hospital for precautionary checks. They will travel back to Germany later this week.

A pair of New Generation i20 R5 customers were part of the entry for the second round of this year’s ERC at the Rally Islas Canarias. Spanish drivers Ivan Ares and Surhayen Pernía battled against the championship regulars on the twisting tarmac stages. Continuing his strong start to the season Pernía, whose entry is partially supported by the Hyundai importer for the Canary Islands, finished eighth among those teams entered for the Spanish championship  where his main focus lies this season.

Ares, meanwhile, finished a fantastic fourth overall, using the power of the i20 R5 to match the European championship front runners throughout the two day event. He fought for a place in the top five overall throughout and he finished on a high, as he set the second best time on the final stage. The performance had him miss the overall podium  that included the reigning champion and the ERC points’ leader  by just 11 seconds. He did, however, secure the best overall finish of the Spanish drivers competing on the event.

Fourth was also the result of Daniel akin on his debut in the New Generation i20 R5 at the Rally Opatija in Croatia. Running with Italian team Friulmotor he and co-driver Saa Bitterman ran consistently in fourth place, holding the spot throughout the rally to finish as the second best of the R5 crews on the entry. After taking delivery of their second i20 R5 from Hyundai Motorsport earlier this month the event was the first where the Friulmotor squad had run a pair of the cars, with team owner Claudio de Cecco at the wheel of the other machine. Like akin he was a fixture in among the top five overall. Unfortunately, he was forced out of the rally when his co-driver was taken ill before stage five.

Hyundai Motorsport Customer Racing manager Andrea Adamo said: “Overall this was a very strong weekend for New Generation i20 R5 customers, with top five results in all the events where they were competing. Not only did we see a first customer win on an international event with Basso and BRC, but we also had an i20 R5 competing at the very front of the European Rally Championship in the Canaries.  With our own team we won the Rallye du Var last season, but to have our customers perform so strongly on these important events is the perfect way to show the performance of the car. Basso is obviously a very experienced driver who has already won an R5 title but both Ares and akin are relatively new to the category. That they can all get the best from the i20 R5 and run at the front in the events they chose to run is hugely encouraging, not only for them, but for all of our customers.”