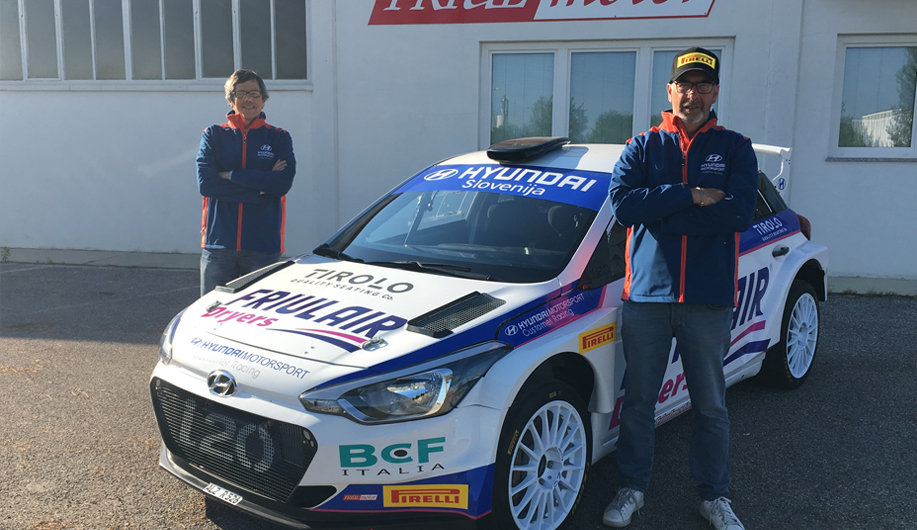 Last weekend (May 27) Claudio de Cecco and Jean Campais began the first event of a freshly signed partnership between Hyundai Slovenia and de Cecco’s Friulmotor team. The Italian pairing took on the Rally Velenje, the second round of the Slovenian championship. Competing against experienced, local R5 crews the duo made a fine start to their campaign in the country, as they finished third overall. The result put them second among both the R5 crews, and those teams registered for the national series.

The previous weekend (May 20-21) de Cecco and Campais had dominated the Rally del Bellunese in their home country, winning six of the nine stages on the event. The pairing won overall by more than half a minute, and with nearly double that margin in hand over the next fastest R5 crew who reached the finish.

The same weekend two teams gave the New Generation i20 R5 its 2017 WRC2 debut in customer hands at the Rally de Portugal. Beginning his season in the championship Fabio Andolfi lined up, backed by ACI Team Italia, returning to the wheel of the i20 R5 after making his four-wheel drive debut in the car last year with co-driver Manuel Fenoli.  With a host of times that put them alongside the top crews from the established teams the pairing proved their ability as they step up to the category for a full campaign in the category, as well as the competitiveness of the Hyundai in the toughest championship for R5 machinery.

In the national championship, which shared the Portuguese stages with the WRC for the weekend, Manuel Castro continued his season with Veloso Motorsport. Unfortunately, he was taken out of rally in a bizarre incident when a mistake by the refueling crew sparked a small fire at the rear of the car.

Two customer teams also started the Szombathely Rallye, the first gravel event of the season in the Hungarian championship. The rougher surface presented new challenges for the Korda Racing and LP Winner crews, however both teams and their crews quickly adapted. Aboard Korda’s car Ádám Velenczei and Csaba Szed? were almost immediately the fastest crews, second quickest through the 10km stage three he fought amongst a top-six that reached the end of the opening day covered by only half a minute.

Before the second day rain transformed the roads. Velenczei struggled to reproduce the same pace as the first day in the heavier conditions, collecting minor damage when he clipped a tree. With the front of the race so closely contested the problems came with a heavy penalty as he fell to seventh overall. LP Winner driver Lovász Pál, meanwhile, did not finish the event for the first time this year.

As part of a busy weekend New Generation i20 R5 crews were out in the UK and Finland. In Scandinavia Jesse Turunen and Kari Kallio contested the Riihimäki-Ralli. The rally, the first gravel rally of the national season, came more than two months after the debut in the car on snow. However, they showed no ill effects of the break in season winning their first stage overall together and holding the lead of the event before they were forced to retire.

Tom Cave and James Morgan again proved the pace of the New Generation i20 R5 in the Scottish Rally. In the dark and the rain of the Friday night the crew won both the opening stages of the event to hold a lead of ten seconds. Early on the second day on the treacherous gravel tracks, however, they were forced to forfeit their lead and withdraw from the rally.

Only a week after taking a finishing in a strong fourth position in the Rally Islas Canarias Iván Ares kept up his strong start to the season in Spanish national championship at the Rally Villa de Adeje (May 12-13) in Tenerife. He and co-driver José Antonio Pintor kept up their challenge for the lead throughout the event, setting top three times on every one of the weekend’s tarmac stages. His consistency earned him second place overall, a third podium in as many races to start the season, and kept him in second position in the championship, just five points behind the current leader.

New Generation i20 R5 customers currently run second and third in the points’ standings with Surhayen Pernía and Carlos del Barrio sitting in third. The pair lost out by just four-tenths of a second in the battle for fourth in Tenerife as the duo completed the second of the home events for their Hyundai Canaries supported teams.

Hyundai Motorsport Customer Racing Manager Andrea Adamo said: “Our customers continue to show the pace of the New Generation i20 R5 on both tarmac and gravel stages. It was great to see the New Generation i20 R5 in WRC2 for Portugal. The championship is the most competitive series for R5 machinery, so to see a New Generation i20 R5 setting times in the top six is very pleasing, especially when you compare the experience levels of the crews running in the category. Our customer also enjoyed a strong start in the campaign supported by Hyundai Slovenia, who joined the importer groups in Finland and the Canary Islands in supporting Hyundai Motorsport customers and helping to promote the car in their national market.”